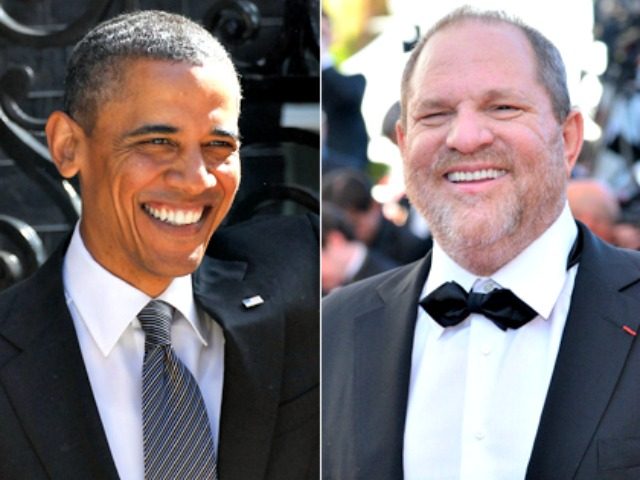 Appearing on MSNBC Tuesday afternoon, Vanity Fair special correspondent Gabe Sherman revealed that he was “shocked” that former President Barack Obama would “legitimize” disgraced movie producer Harvey Weinstein at a recent political event despite claims of sexual harassment against Weinstein being “an open secret in Hollywood and in media circles.”

During the 1 p.m. ET hour exchange, anchor Craig Melvin noted that Weinstein was “a well-known Democratic donor” who gave “hundreds of thousands of dollars to candidates and causes associated with the left over the years.” After reading a statement of Hillary Clinton finally denouncing the Hollywood mogul who strongly supported her campaign, Melvin turned to Sherman: “Gabe, it’s hard to believe that a slew of folks did not know what was going on for decades.”

Sherman thought of another prominent Democrat who benefitted from Weinstein’s financial support:

Well, clearly people did know that there were allegations of Harvey’s behavior with women. It was an open secret in Hollywood and in media circles. And, you know, I was at an event months back, right after President Obama left office, in which he gave a speech. And the first person – I was really struck by this – the first person he went over to greet on the rope line was Harvey Weinstein. And President Obama’s daughter, Malia, interned for him. And I, as a reporter, sort of knowing the rumors and the gossip, was shocked, you know, knowing what’s out there, that President Obama would legitimize Harvey Weinstein in that way.

He then observed: “And I think that is partly why women felt so scared to come forward, because the most powerful people in the country, from actors to journalists to politicians, were all surrounding themselves around Harvey.”

Moments later, NPR media reporter David Folkenflik wondered: “You know, it’s striking, you think about the question, why wasn’t this reported earlier?” He then congratulated The New York Times for breaking the story: “At the same time, there are standards at places like The New York Times, which has proven time and time again to be willing to go after figures, liberal and conservative, when the facts merit it.”

However, perhaps before he started lauding the Times for taking on Weinstein in 2017, Folkenflik should have recalled that the paper’s top executives quashed a similar report back in 2004.