Around 100,000 protesters from across Europe are pouring into Hamburg ahead of G20 summit tomorrow

They fear as many as 8,000 of them are ready to commit violence at the protest dubbed ‘Welcome To Hell’

Hardcore anti-capitalist protesters have been hit with water cannons and pepper spray by German riot police after they attacked officers with bottles and stones at the G20 summit in Hamburg.

Police say they repeatedly asked a group of demonstrators to remove their masks and hoods but instead officers were hit with bottles and bricks – breaking the window of a riot van.

The violence broke out near the start of the demonstration at a riverside plaza used for Hamburg’s weekly fish market.

As many as 100,000 protesters from across Europe are pouring into the port city for a demonstration dubbed ‘Welcome To Hell’. Police believe as many as 8,000 are ready to commit violence.

‘Welcome To Hell’. Police believe as many as 8,000 are ready to commit violence. 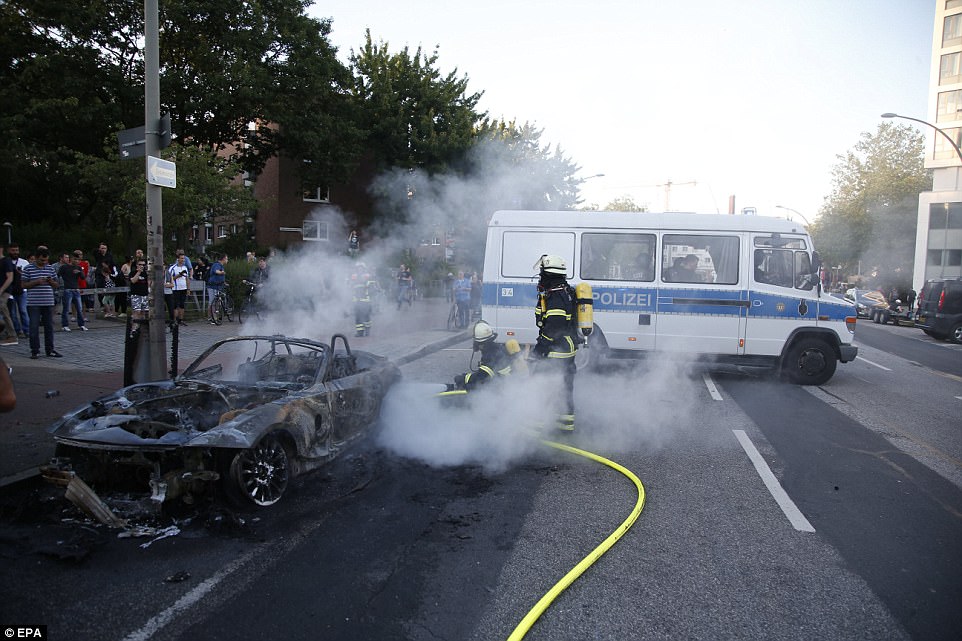 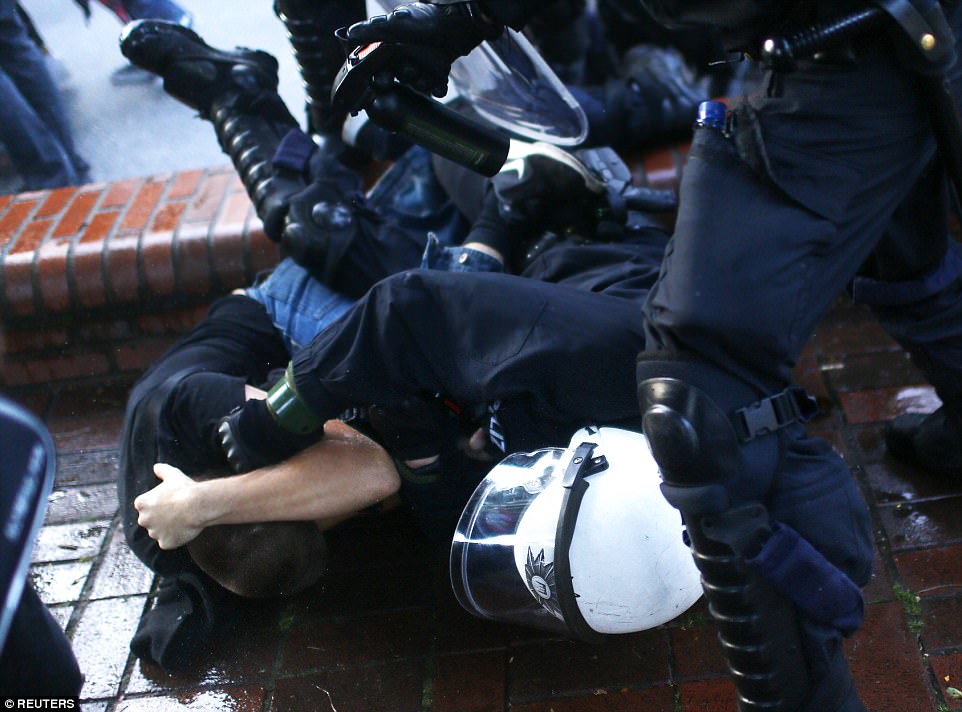 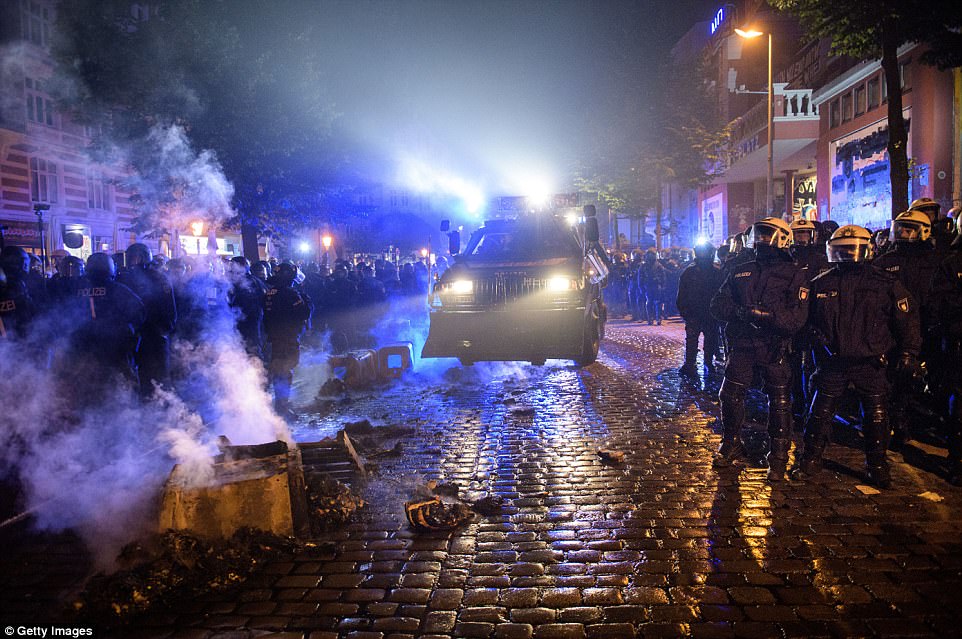 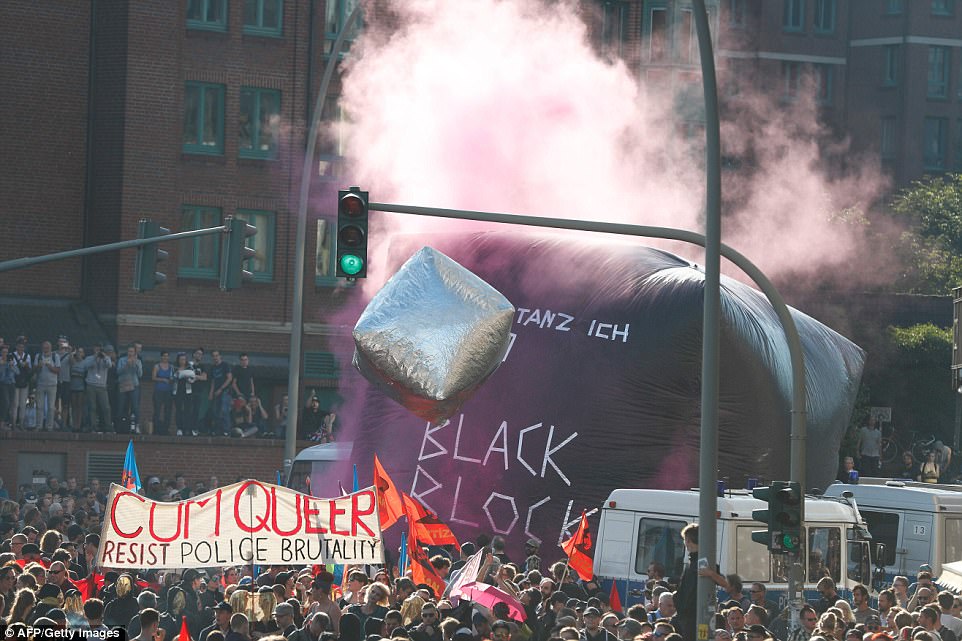 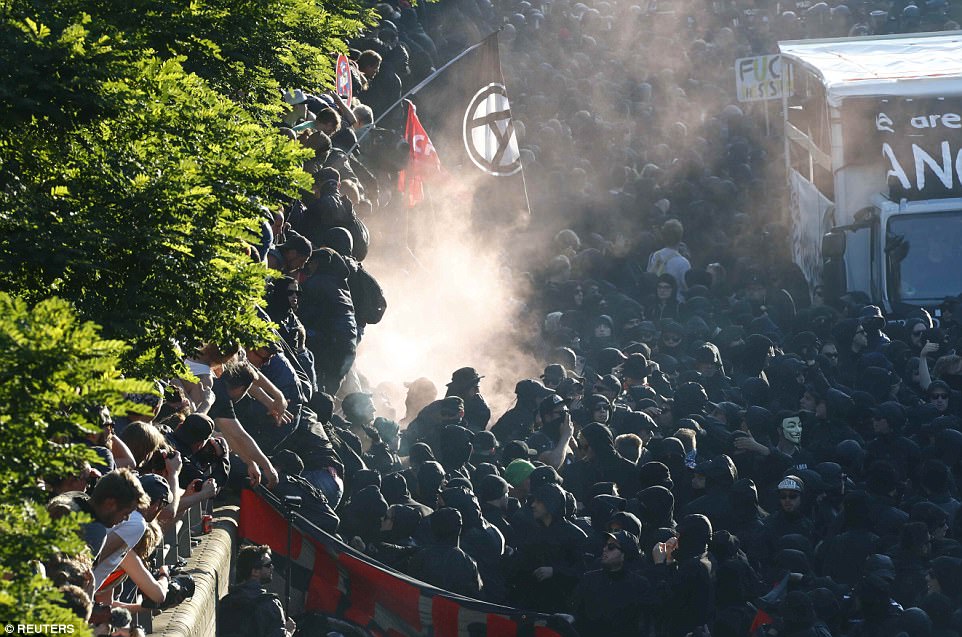 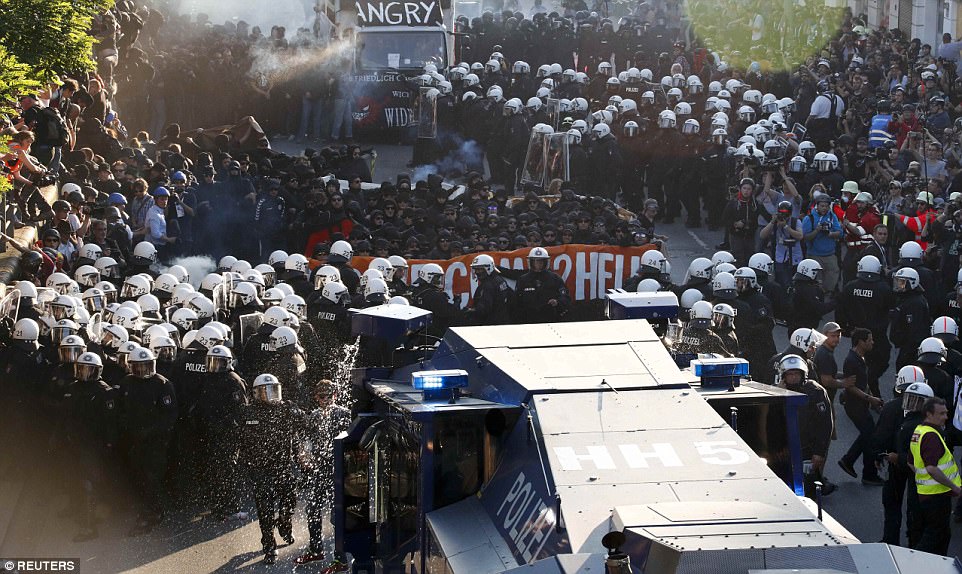 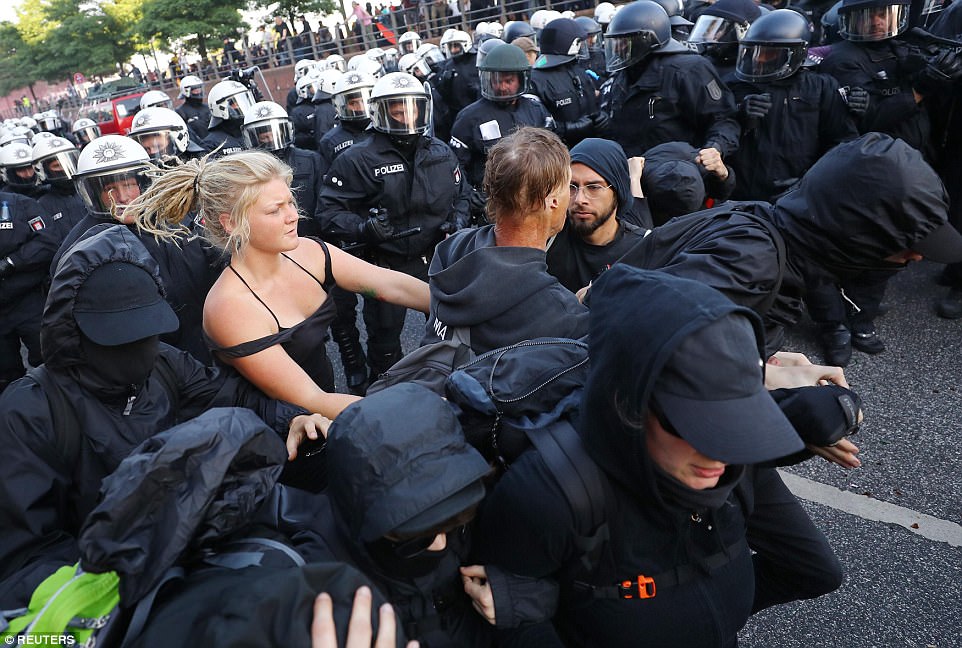 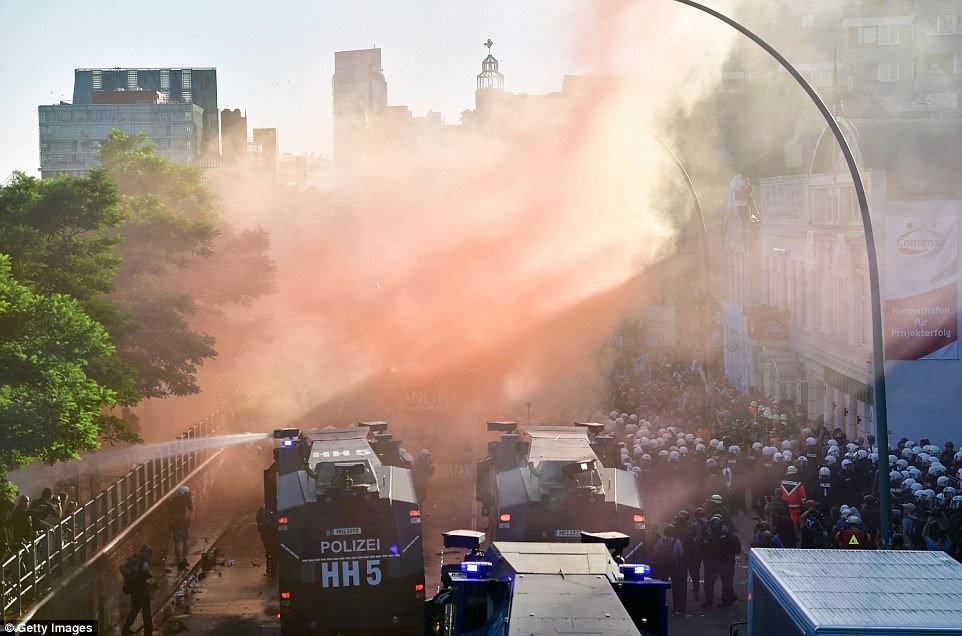 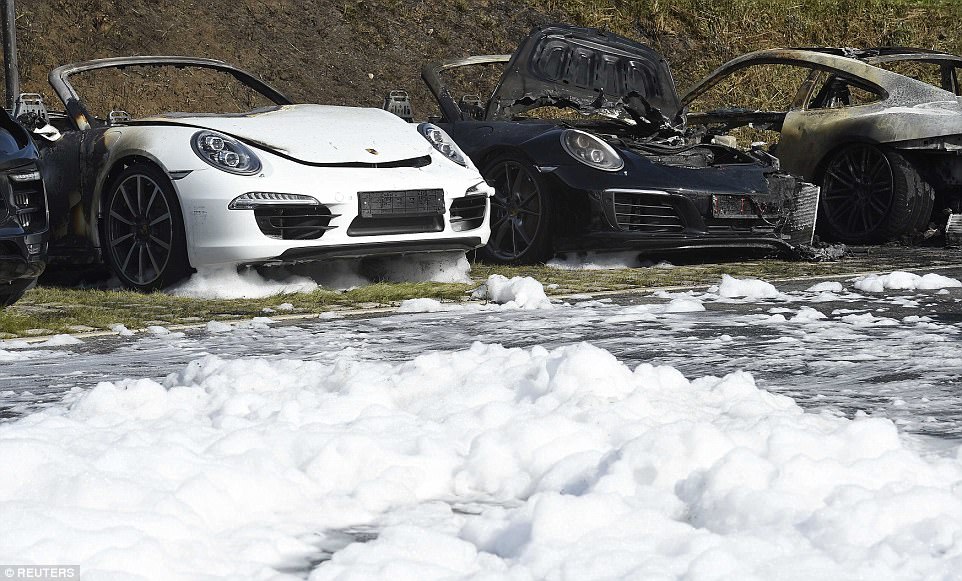 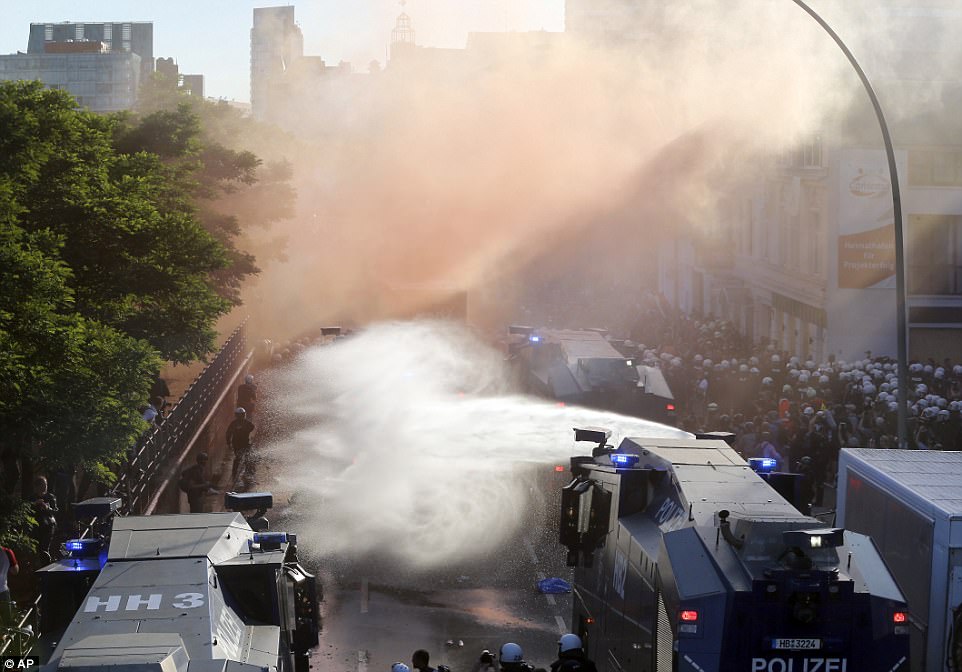 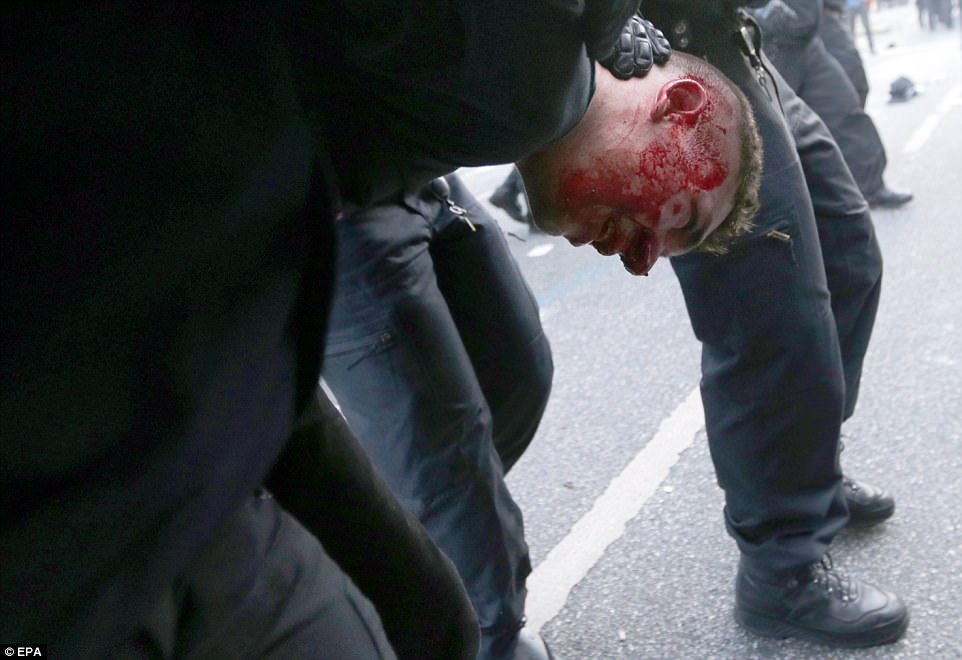 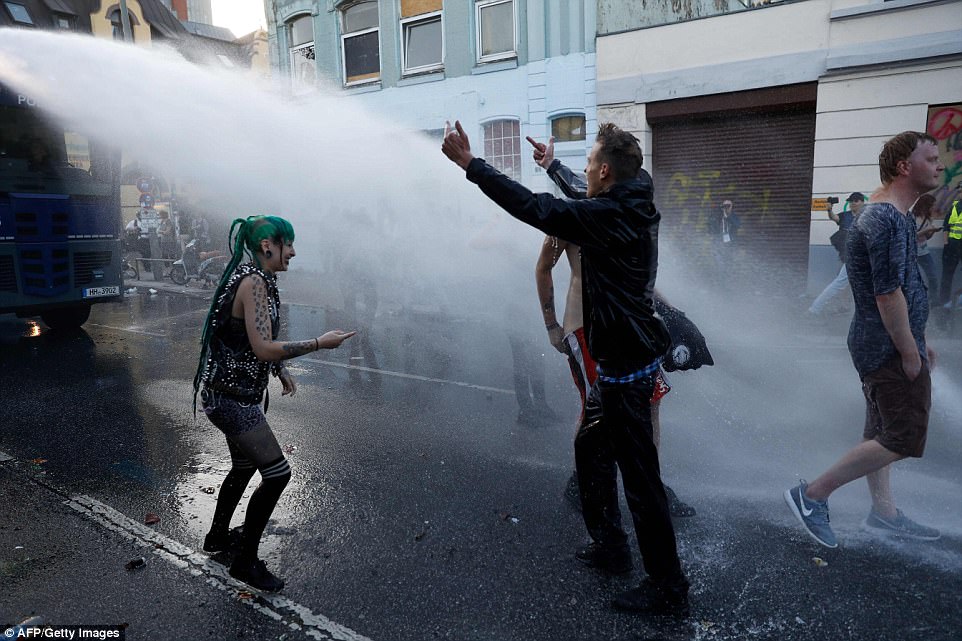 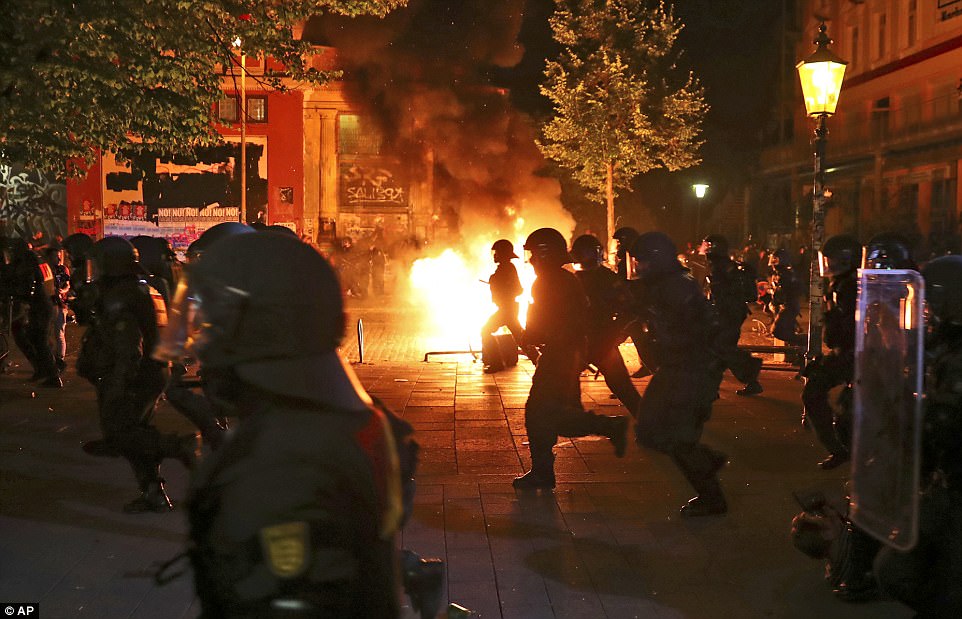 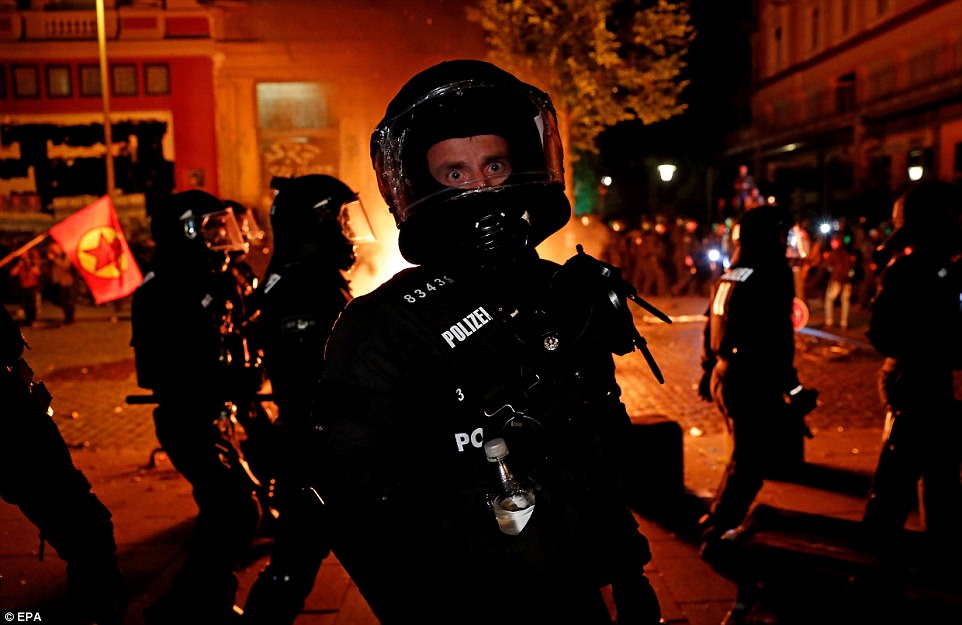 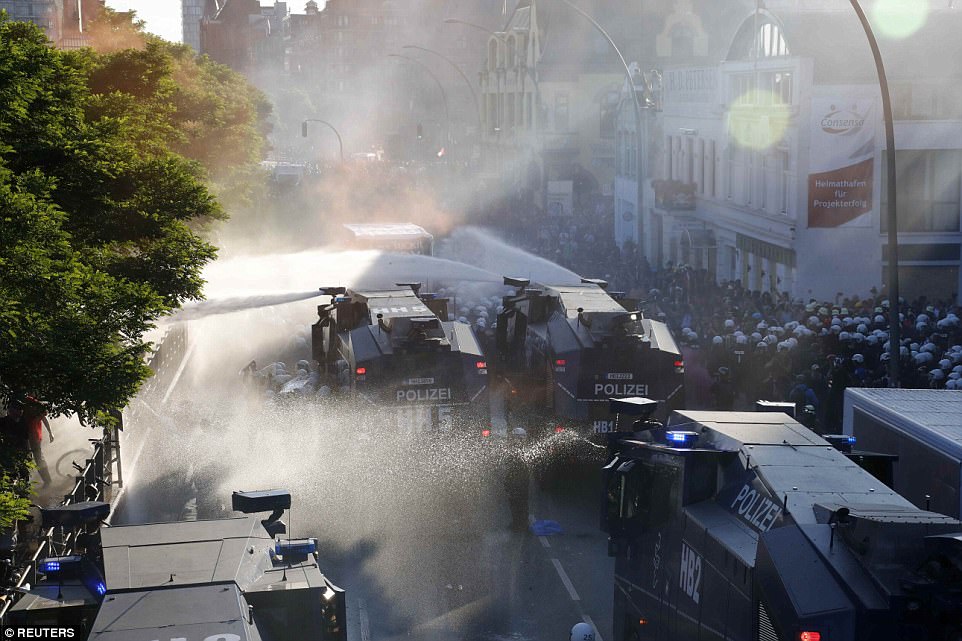 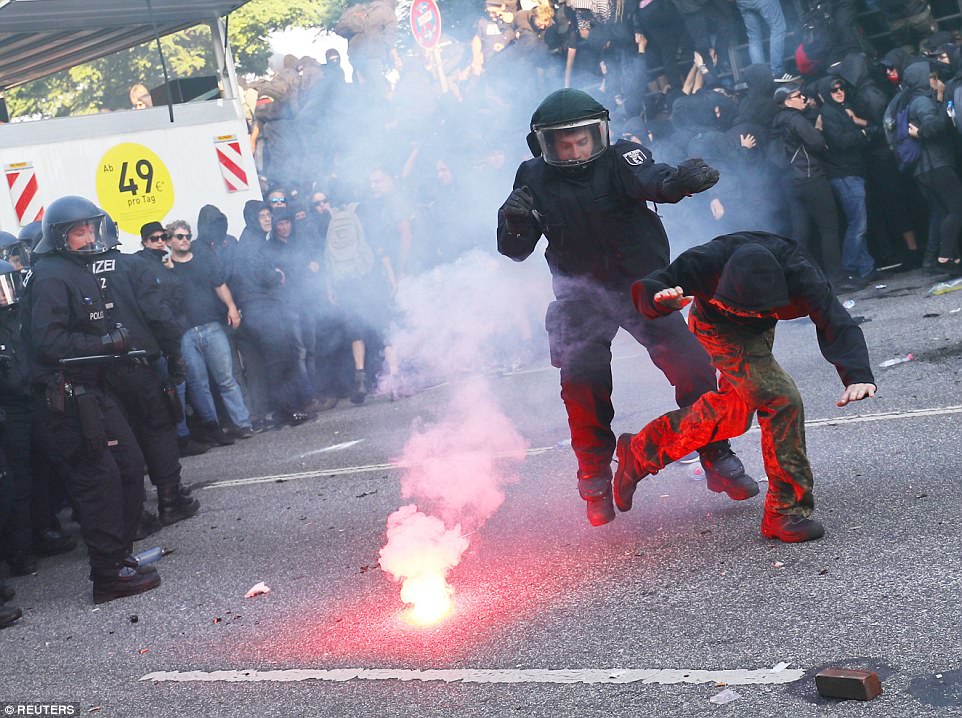 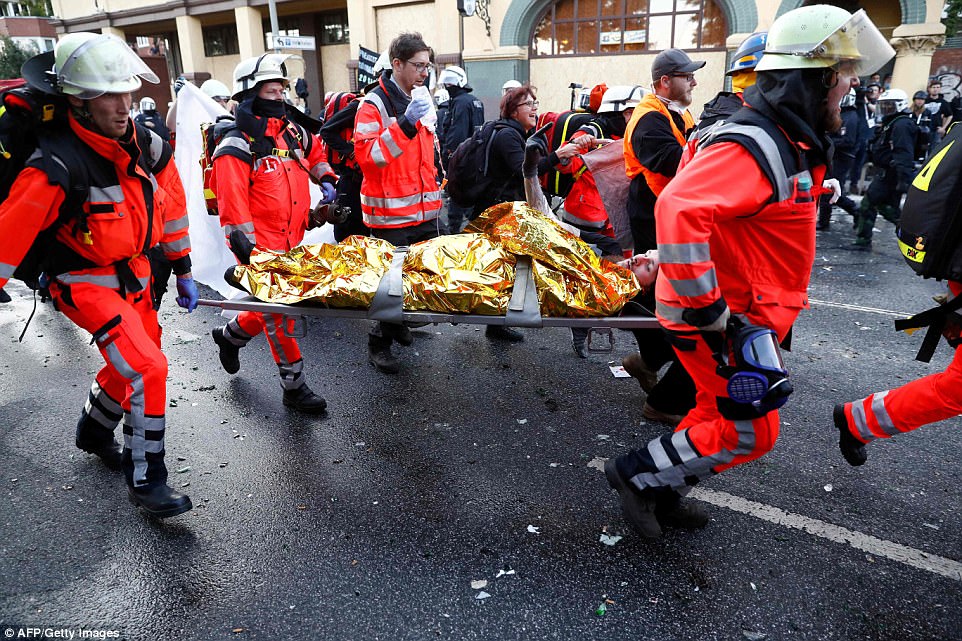 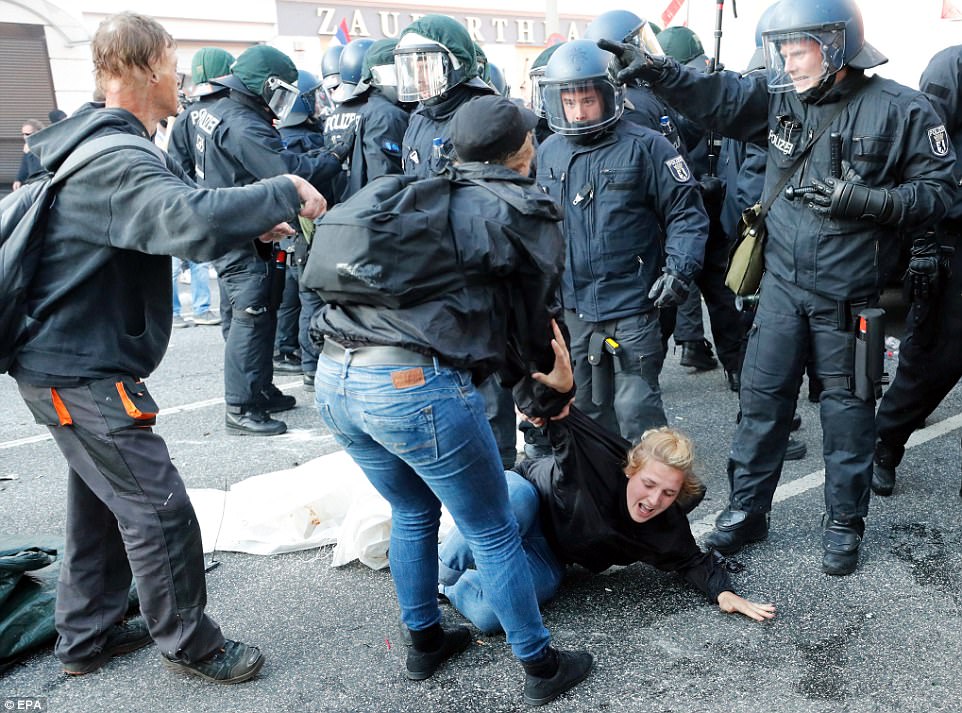 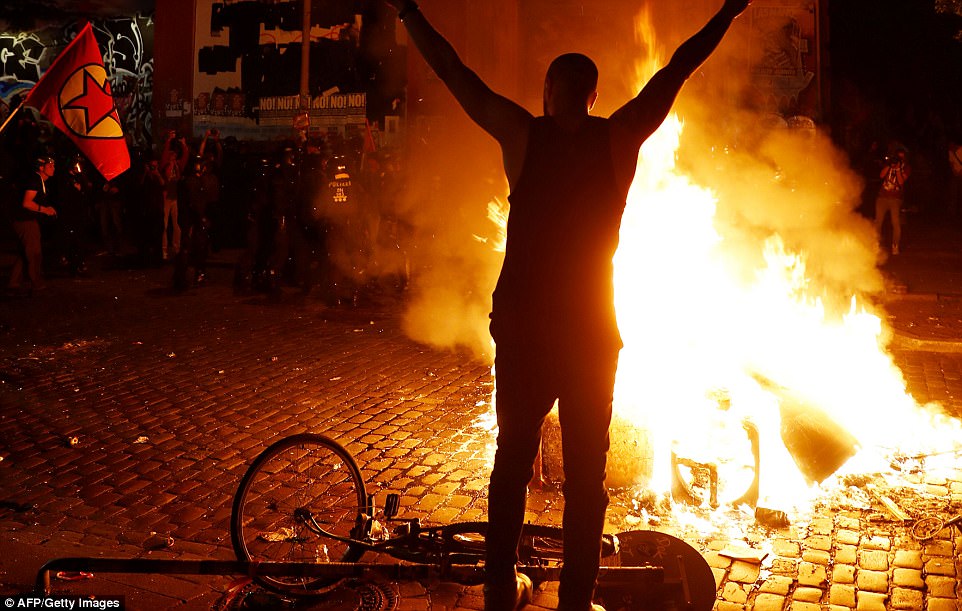 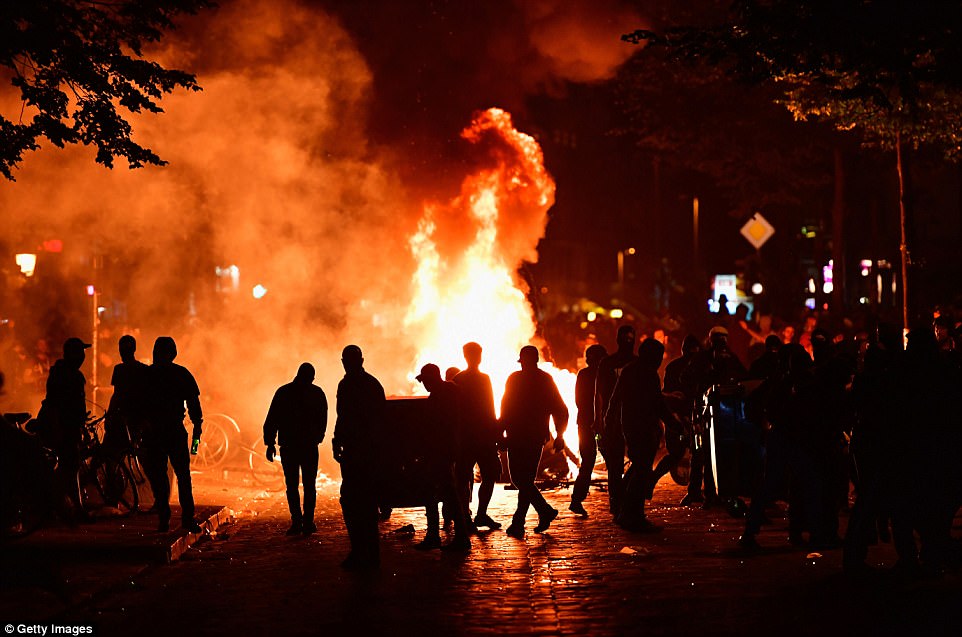 Up to 20,000 police officers are on duty to watch over the main demonstration, organised by the alliance of anti-capitalist groups.

Police are already investigating whether an overnight fire which burned down a luxury Porsche car dealership in Hamburg was an arson attack linked to the summit.

Demonstrators gathered at a riverside plaza used for Hamburg’s weekly fish market before setting off on a march through the city.

There were no immediate reports of significant trouble, though police said a few bottles were thrown. Police using loudspeakers also were calling on about 1,000 demonstrators to remove masks.

Protesters say the G20 has failed to solve many of the issues threatening world peace, including climate change, worsening inequality and violent conflicts.

The event poses a challenge for those tasked with securing the summit of leaders from the world’s 20 biggest economies, hosted by Chancellor Angela Merkel.

Merkel, who is running for a fourth term in a September election, stressed today that she was committed to an open international trading system, despite fears of US protectionism under Trump.
‘We are united in our will to strengthen multilateral relations at the G20 summit… We need an open society, especially open trade flows,’ she said in Berlin.

But a fire overnight at a luxury Porsche car dealership in the north of the city that damaged eight vehicles could be a foretaste of what’s to come. Police said they were investigating whether it was an arson attack linked to the summit.

Locals are unhappy with Merkel’s decision to hold the summit in the centre of Germany’s second-largest city to show healthy democracies could tolerate protests, as they are worried about property damage by leftist militants.

After Hamburg authorities curbed camping by protesters, the St Pauli football club offered 200 sleeping places in their stadium as ‘a clear signal for human rights, freedom of expression and the right to demonstrate’.

Tens of thousands are expected to gather at the fish market in the borough of St Pauli, known for its red light district.

They will then march north to the heavily secured summit venue.

‘It’s ridiculous that police say some of us are violent when starting tomorrow the leaders of the world’s largest weapons-exporting and importing nations will be arriving in our city,’ said Stefan Hubert, a 32-year-old graphic designer.

Holding a placard reading, ‘Make love great again!’, he added: ‘This summit is a waste of money that could be better spent on deploying more boats to stop migrants fleeing war and hunger from drowning in the Mediterranean.’

Turkish-German protester Fatima Cicek said she and her two sisters wanted to make the point that the G20 is undemocratic as it is a forum where a handful of leaders make decisions that could impact the whole world.

But her main issue is with Trump. ‘He is the most disruptive and egotistical leader at the summit,’ the veiled 38-year-old social worker said.

There is irony in the protesters’ dislike of Trump. The US president and anti-capitalist activists have something in common: distrust of globalisation.

Yet Trump was in Hamburg to push for trade rules that benefit America, including steelmakers facing tough competition from China, while the protesters were demanding more rights for the poor regardless of where they live.

‘Trump is here to promote his own interests and those of the richest people in America,’ said Cicek. ‘We are demanding more rights for the millions of people in Africa who have no roof over their heads.