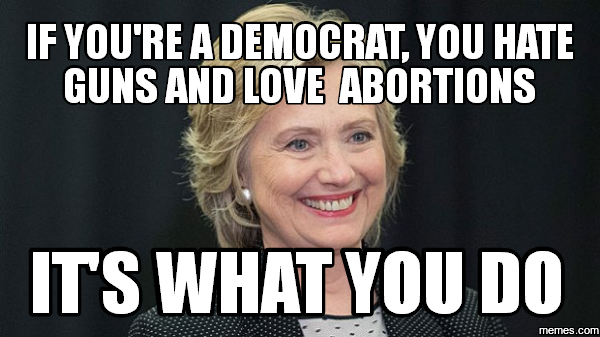 You have to wonder how liberals think this works. So, a manifestly conflicted special counsel leading a pack of maxed-out Democrat donors decides Donald Trump has to be kicked out of office for “obstructing justice” regarding a cynical lie about him cavorting with the Kremlin and…then what? President Pence, until they do the same thing to him? Or do we just skip right to President Felonia von Pantsuit, shrug our shoulders, and give up on our foolish dream of having a say in our own governance?

Now, pulling off the soft coup is going to be harder than they think. The establishment has not thought this out. They sort of assume that if they squelch Trump then everything somehow just goes back to them being in unchallenged control. Wrong.
Mueller can’t indict Trump – that stupid Constitution, always getting in the way! No, the goal is for Mueller and his crack team of committed liberal activist lawyers to generate some head-shaking, tsk-tsk, more-in-sorrow-than-in-anger, report claiming Trump “obstructed” the probe into Hillary’s Trump/Russia collusion lie that even the liberals reluctantly acknowledge never happened.

But their problem is that impeachment is a purely political act – this isn’t going to get tried before some leftist DC judge and a 96% Democrat DC jury. No, they have to convince the Republican members of the House of Representatives to impeach and, well, have you taken a look at a political map of the US lately? It’s as red as a baseball field full of conservatives after a Bernie Bro shows up with a rifle.

Now, in the circle of jerks that is DC, congressmen are bombarded with the Trump obstruction narrative. Many neutered professional conservatives, eager to return to the old status quo where they sort-of mattered, are helping our enemies. Some of these congressmen are themselves Fredocons, weak and stupid, and are listening. Some might be swayed – except in a couple weeks they have to go home and be around normal people, and they’re going to hear something completely different.

Normal people aren’t falling for it.

Has anyone out there actually met a Trump voter who said something like this?

I supported Trump, but now I don’t because his refusal to passively sit back and let a Washington insider with an obvious conflict of interest and his Democrat staff drive him out of office on the basis of a Hillary-driven lie far outweighs Neil Gorsuch, pulling out of the climate scam, beating ISIS, and repealing Obamacare.

Even I, trapped behind enemy lines in deep blue California, have yet to hear anyone talking about this transparent coup, much less actually saying, “Yeah, we have to climb up on the Democrats’ altar and commit ritual suicide to please them.”

Congressmen fear their voters, and their voters – not the bused-in corps of aspiring baseball diamond shooters Soros cash pays to show up at townhalls to complain that they might have to pay for their own doctor like you and I do – are not going to accept this. No matter what Mueller’s report says, Trump is not getting impeached. Oh, and please, Democrats, make 2018 about impeachment. We yearn for the chance to yet again demonstrate to you that America is not MSNBC.

Now, that’s assuming Trump doesn’t fire Mueller, something he has every right to do under the Constitution – and should do based on this hack’s obvious corruption. The furor the media has threatened would follow in order to keep Trump from doing so will turn out to be yet another nothingburger. But if Trump doesn’t can him, Mueller and his team of committed Never Trumpers will claim the President obstructed “justice” for not hanging his head in shame over the Democrat lies. And that will go nowhere. Trump will never be impeached. And Trump will pardon any of his associates Mueller and his pack of cynical leakers tries to indict on whatever puffed-up, bogus charges they invent in order to justify this exercise in investigatory onanism.

And we should hope that’s how it ends.

Because what happens if the voice of half of America is effectively silenced by the DC swamp and its media guardians? The Tea Party was the first manifestation of the anger out there at the establishment. It was polite – it even cleaned up its own messes after its peaceful protests. The media, and the same alleged conservatives who saw the Tea Party as a threat to their own position because it caused donors to start asking for results instead of simply writing checks, attacked the Tea Party. Well, then we got Trump, who was not nearly as polite, and who took the White House fair and square from the designated establishment candidate. And now they want to use non-ballot means to make sure the normals’ choice is again ignored.

What do they think comes after Trump? Someone nice?

Oh well, we should have known not to get all uppity and try to have a say in our own country. Let’s let our betters rule us. Let’s obey.

No, that’s not going to happen. If liberals like chaos and even violence – and their *wink wink* denunciations of their own creature’s attempted conservative murder spree and their squealing delight in a high-profile play where the President is butchered onstage show they think they do – then the way to get chaos and violence is for them to succeed in their campaign of fascist, anti-democratic scheming against the guy who beat the harpy they nominated.

If you want real political chaos and real political violence, then just keep going down this path. You can’t light the fuse and not get the explosion. I saw what happens when you toss away the rule of law – don’t do it.

The hatred out there is real and growing. This is not a good thing – it’s a terrible thing. People are buying my novels about the country splitting apart and the horrifying specter of actual civil warfare (Hint: it’s ugly) because that’s where the establishment’s desperate schemes to hold onto power despite the will of the people, as manifested at the ballot box, all lead.

And the left is not ready for what its stupidity and greed could unleash. The establishment hacks think they can undermine the foundations of this country and not have it collapse on top of them. What progressives forget is that the rules, norms, and customs they ignore are not there to protect the normals, but to protect the weak and vulnerable elites who can’t go to their gun safe and choose from a half-dozen long weapons when things get real.

Here’s how this goes: If you end the rule of law, you begin the rule of power, and the rule of power means the folks with the most guns rule. Do they think the predominantly red state soldiers of our military are going to murder other Americans and risk their own lives to secure the unearned power of a bunch of Chardonnay-swilling liberals and their fakecon lackeys?

If they knew any soldiers, they would know the answer.

Before it’s too late and before you’ve done damage that can’t be undone, give up this dream of some extra-constitutional dues ex Mueller to overturn the election you lost. Turn away from this insanity before it’s too late, because straightforward from here is chaos.