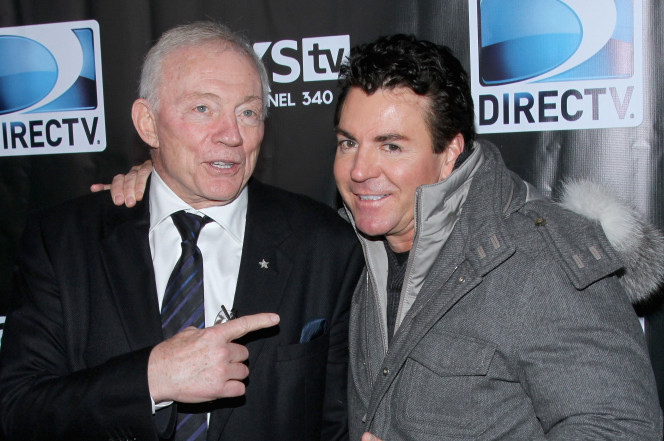 Is this the pizza phase of Jerry Jones’ plan?

There are rumblings that the Cowboys owner is behind the CEO of Papa John’s calling out NFL leadership Wednesday, when John Schnatter blamed declining Papa John’s stock on the NFL’s national anthem protests.

Pro Football Talk, in a juicy (saucy?) story, reported the whispers in league circles about whether Jones had put Schnatter up to the Roger Goodell hit job during the company’s third-quarter earnings conference call.

Schnatter’s comments surely would seem pleasing to Jones, who is campaigning against the league’s commissioner.

“Leadership starts at the top, and this is an example of poor leadership,” Schnatter said. “NFL leadership has hurt Papa John’s shareholders.”

If anything can get the owners’ attention, it’s lost funds, and Schnatter tried to inspire fear. The company said it has dropped the NFL shield or “official sponsor” designation, according to ESPN, from its commercials, frightful of a league whose likability is waning.

Jones, meanwhile, has been on the warpath against Goodell. He has been trying to halt a contract extension for the 12th-year commissioner, whose new deal seemed imminent months ago but remains unsigned.

Last week the Cowboys owner led a 17-owner conference call discussing how to block the contract, and Jones has long maintained that Goodell is overpaid. Jones and Goodell differ over the anthem protests, with Jones threatening his team to stand and Goodell not mandating a league-wide rule. The fact that Goodell suspended Dallas star Ezekiel Elliott for six games over a domestic violence case would seem to only further provoke Jones.

The league would need 24 owners to approve of Goodell’s firing, which still seems a long shot — but one that Jones may feel he kneads to take.