An Iowa teacher is under fire for a back-to-school classroom display that lumps President Trump with some of the most deplorable humans in all of world history. 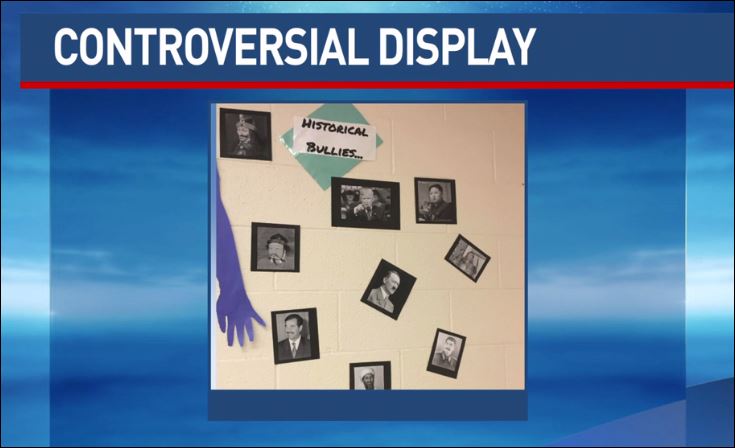 The school wouldn’t talk about the display, and directed parents and the media to an ambiguous tweet:

A teacher put up a bulletin board and had a momentary lapse in judgment. He has corrected his mistake and now it is a personnel issue.

“A teacher put up a bulletin board and had a momentary lapse in judgement. He has corrected his mistake and now it is a personnel issue,” the school announced.

It provided no more details to taxpayers about what the teacher is telling students about the American president.

Meanwhile, a New Mexico teacher is under investigation after a student recorded her anti-Trump rant.

A Bernalillo Public Schools teacher is under investigation after a student in her world history class recorded her anti-Trump rant and forwarded it to district officials.

Neither the Bernalillo High School sophomore who recorded the conversation nor her teacher were identified by KRQE, but the television station reports the classroom lesson on Thursday centered on a political cartoon of President Trump surrounded by statements like “white supremacist,” “deport ‘em all,” “neo-nazis,” and others.

“If you have a history teacher teaching you that Trump is good, then I feel really scared for you,” the teacher said.

“Technically, he is the immigrant,” the teacher said of Trump. “And if he’s saying all this stuff about immigrants – and who is his wife?”