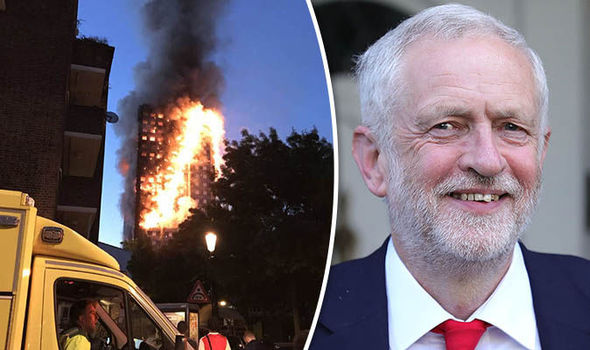 Jeremy Corbyn has called for the empty homes of rich people in Kensington to be seized for Grenfell Tower residents who have been made homeless by the fire.

The Labour leader said that the London Borough was a “tale of two cities” between a wealthy south and a rich north.
He suggested that “requisitioning” expensive vacant properties could help ensure that residents are housed locally.

The Government has committed to rehousing all those who lost their homes in the fire in the local area.

However Mr Corbyn said: “Kensington is a tale of two cities. The south part of Kensington is incredibly wealthy, it’s the wealthiest part of the whole country.

“The ward where this fire took place is, I think, the poorest ward in the whole country and properties must be found – requisitioned if necessary – to make sure those residents do get re-housed locally.

“It can’t be acceptable that in London we have luxury buildings and luxury flats left empty as land banking for the future while the homeless and the poor look for somewhere to live. We have to address these issues.”

It came as Theresa May announced a public inquiry into the blaze but faced questions over why she did not meet with residents, in contrast with Mr. Cobryn.

Asked why she had not met survivors and those who lost loved ones, Mrs May replied: “Well, I visited the scene of this terrible fire this morning.

“I wanted a briefing from the emergency services. They’ve been working tirelessly in horrific conditions and I have been overwhelmed by their professionalism and their bravery.

“I heard stories of firefighters running into the building being protected from the falling debris by police officers using their riot shields. And we thank all our emergency services for the incredible work that they have done.”

Sadiq Khan, the Labour Mayor of London, faced an angry crowd as he was visited the scene of the fire.

He was confronted by a young boy who asked “how many children have died?” as he talked to an angry crowd at Grenfell Tower today.

He was also heckled by a supporter of Mr Corbyn about his failure to back the Labour leader and there were suggestions that a bottle was thrown at him. More than 20 police officers rushed in to calm the crowd.

Nick Hurd, the fire minister, said that the fire was a “national tragedy” and no moment for “cool plodding democracy” as he vowed to leave “no stone unturned”.

It came as a new poll found that Theresa May’s poll ratings are now lower than Jeremy Corbyn’s were before the General Election.

A survey by Yougov found that the Prime Minister’s “favourability score” has fallen from plus 10 to minus 34. In the meantime Mr Corbyn’s popularity rating has climbed by 42 points.

It came as John McDonnell, the shadow chancellor, urged the unions to mobilise more than a million people to protest in London on July 1 in a bid to pressure Mrs May into standing down.