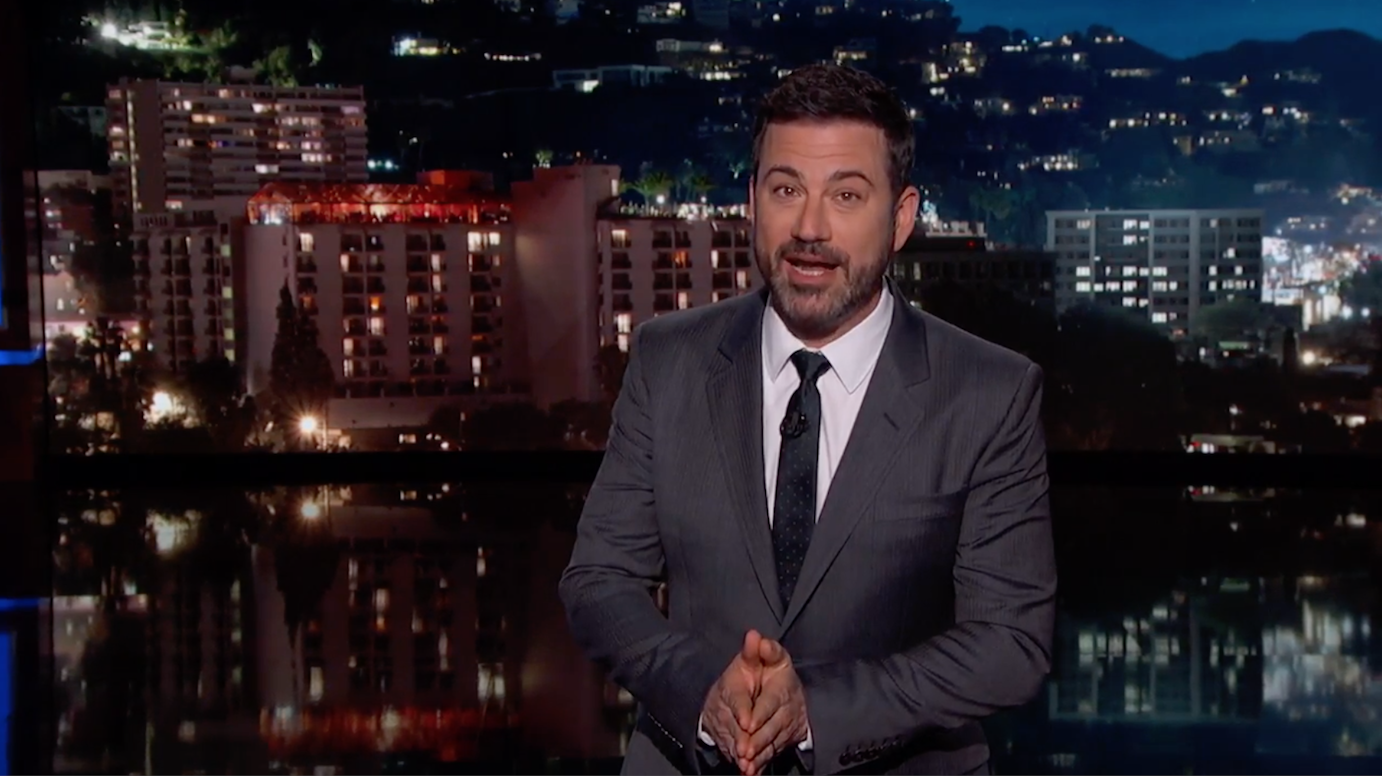 Dismissing as inadequate calls for prayers for the victims by President Donald Trump, House Speaker Paul Ryan, and Senate Majority Leader Mitch McConnell (R-KY), the Jimmy Kimmel Live host said: “they should be praying for God to forgive them for letting the gun lobby run this country.”

Kimmel railed against lawmakers who “won’t do anything about this because the NRA has their balls in a money clip,” insisting that their “thoughts and your prayers are insufficient.”

The comic responded to those saying there was nothing that could have been done to stop Sunday’s attack. “I disagree with that intensely,” Kimmel said, “because of course there’s something we can do about it.”

“There are a lot of things we could do about it. But we don’t,” he continued, “which is interesting because when someone with a beard attacks us, we tap phones, we invoke travel bans, we build walls, we take every possible precaution to make sure it doesn’t happen again. But when an American buys a gun and kills other Americans, then there’s nothing we can do about that.”

The ABC funnyman’s comments came after suspected gunman Stephen Paddock opened fire on the Route 91 Harvest music festival in Las Vegas Sunday, firing down hundreds of rounds of bullets on thousands of revelers from the 32nd floor window of his hotel room at the nearby Mandalay Bay Resort and Casino. The gruesome attack killed at least 59 people and left more than 500 others. Paddock reportedly killed himself before being apprehended by law enforcement officials.

The late-night host chastised lawmakers who have advocated for Second Amendment rights using examples and characterizations of legislation popular among the anti-gun left, many of such examples having no clear relevance to Sunday’s tragedy. Of President Trump, for example, Kimmel said, “In February he also signed a bill that made it easier for people with severe mental illness to buy guns legally.”

This talking point about February’s repeal of a ban on certain social security recipients has nothing to do with “severe mental illness.” Those “adjudicated as a mental defective or has … committed to any mental institution” are prohibited from owning firearms under the 1968 Gun Control Act, unaffected by the legislation Trump signed. Kimmel made no claim that Las Vegas shooting suspect Stephen Paddock has ever been diagnosed with a mental illness. Breitbart News is aware of no such diagnosis.

Kimmel went on to talk, at length, about the supposed “gun show loophole,” a common anti-gun lobby characterization of the fact that law-abiding Americans are allowed, in the vast majority of states, to sell and purchase guns among one another without using a gun dealer. The gun show loophole has little to do with gun shows but has remained a consistent feature of anti-gun rhetoric, even in states where private sales of firearms are completely illegal.

“There are loopholes in the law that let people avoid background checks if they buy privately from another party, if they buy a gun online, or at a gun show,” Kimmel claims, showing the pictures of the U.S. Senators that voted against a soundly defeated 2016 bill that would have banned most interpersonal transfers of guns in the United States and saying, “These are the 56 senators that didn’t want to anything about that.”

Kimmel then cited polls showing wide bipartisan support for “background checks” and “restricting gun ownership for the mentally ill” — two policies that have been the law of the land for decades, as evidence the 56 senators who voted against Chuck Schumer’s gun bill were out of touch. “But not these gang,” Kimmel said, “they voted against both of those things.”

There is currently no indication Paddock purchased any of the weapons he used at a gun show. It is unclear how he obtained all of his weapons, including at least one reported to be a heavily-regulated fully automatic rifle. Nor is there any indication Paddock used or attempted to use a suppressor. This did not prevent Kimmel from, as failed presidential candidate Hillary Clinton had, railing against “silencers” in reference to recent efforts to loosen National Firearms Act requirements on civilian ownership of suppressors.

“I want this to be a comedy show, I hate talking about stuff like this,” Kimmel pleaded to his audience, becoming visibly upset. “… What I’m talking about isn’t gun control, it’s about common sense.”

Kimmel ended by asking that viewers also not to forget those in hardship in Puerto Rico.