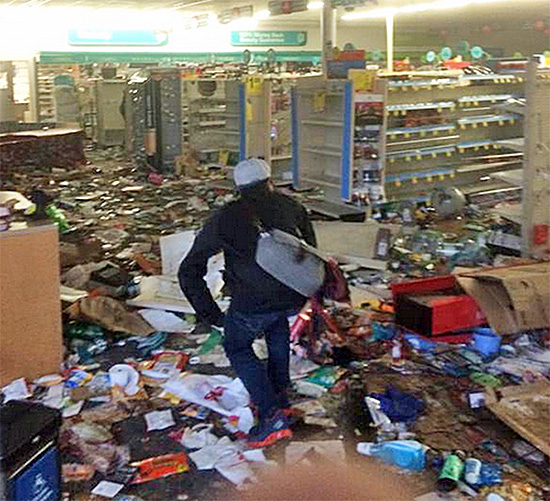 A Twitter-certified journalist has attributed laws protecting private property to “white supremacy,” drawing a flood of criticisms and mockery.

Sarah L. Jaffe, Nation Institute fellow and journalist whose work has appeared in Salon, the Week, the Washington Post, and the Atlantic, slammed the Miami Police Department for a Twitter ad warning against looting, since the looters featured in the accompanying photo happened to be predominantly black.

Thinking about looting? Ask these guys how that turned out. #stayindoors pic.twitter.com/7m42B0KFr4

In her Tweet, Jaffe stated that “the carceral state exists to protect private property,” which seemed to imply that the defense of private property is a bad thing and a tool of “white supremacy.” She failed to give her opinion concerning whether the state should defend the property of people of color.

Jaffe’s Tweet received 4,300 “likes” but also unleashed a hurricane of scorn, which took a wide variety of forms.

Many of the replies focused on the right to private property as a fundamental human right irrespective of race.

Private property is just that. PRIVATE property. They also arrested whites that were looting. There goes your racist rant.

Others noted that laws against theft exist in every nation in the world, including nations whose populations are composed of people of color.

They have prisons, crime, and private property in Nigeria too. And Egypt. And India. Nothing to do with white supremacy. Poverty/inequality.

Some took issue with the progressive degrading of the term “racism,” which now can be thrown around to mean virtually anything.

I'm old enough to remember when racism meant the belief that one's own race is superior. Now it's when you get busted for stealing.

While some commentators mocked the absurdity of Jaffe’s remark, others answered her in a more serious vein, taking the time to explain the actually purpose of criminal law and its enforcement.

No, the carceral state is there to ensure that criminals are not free to steal, rape or threaten the lives of law-abiding citizens.

And others wondered aloud whether Jaffe’s dislike of the enforcement of anti-looting laws would extend to the looting of her own property.

Sarah Jaffe is, of course, white herself.