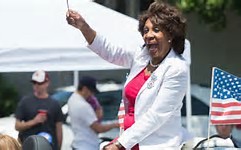 It is not secret that the left is set on getting President Trump out of office and are willing to do whatever it takes . “Resistance summer” is focused on rallying Millennials to protest corruption, hate, and fight for the rest of the left’s agenda. In the end, they want to create hate towards President Trump and now are being led by Maxine Waters.

“Resistance summer” has the goal of combating corruption but have turned to Waters to lead them, which is almost comical because of her long history of corruption. The California Democrat has stolen from taxpayers and used her power for her personal benefits. Waters has been quoted saying, “if you (President Trump) hate the Constitution so much, resign” but that means she should have resigned before spending 13 terms as a congresswoman.

Waters was considered the one of the most corrupt members of Congress, which is being ignored by the supporters of “resistance summer” and the rest of the left. Waters has always been one to attack every move by the republican party. When Trump won the election last year, Waters was at the front of the anti-Trump push and it had gained attention of a younger audience who knew nothing about her. Sad part, the younger crowd probably still doesn’t know who she is or the kind of shady past she has.