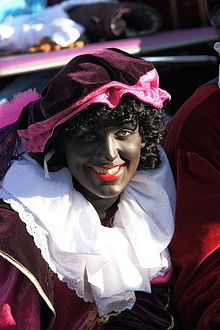 In parts of Europe (notably non-Islamic parts of the Netherlands and Belgium), there is a longstanding tradition of people dressing up as Santa Claus and Santa having an assistant named “Black Pete.”  Black Pete, usually a person in blackface wearing outlandish dress, is a jovial, gay personality who amuses audiences with his vaudeville antics.

Unfortunately, liberals have discovered Black Pete and decided he is racist.  But many Europeans don’t feel that way.

The characters of Zwarte Pieten appear only in the weeks before Saint Nicholas’s feast, first when the saint is welcomed with a parade as he arrives in the country (generally by boat, having traveled from Madrid, Spain). The tasks of the Zwarte Pieten are mostly to amuse children, and to scatter kruidnoten, pepernoten, and Strooigoed (special Sinterklaas sweets) for those who come to meet the saint as he visits schools, stores, and other places. …

[A]ccording to a 2013 survey, upwards of 90% of the Dutch public don’t perceive Zwarte Piet to be a racist character or associate him with slavery and are opposed to altering the character’s appearance. This correlates to a 2015 study among Dutch children aged 3–7 which showed that they perceive Zwarte Piet to be a fantastical clownish figure rather than a black person.
Vox, the far-left news site, was so incensed that they produced a propaganda video about the subject.  The video was hysterical because it shows the prime minister of the Netherlands, Mark Rutte, being asked about it at a nuclear security summit, and he says, “Black Pete is black, and I cannot change that, because his name is Black Pete, and it is not Green Pete, or Brown Pete.  It is Black Pete.  I cannot change that.”  It’s doubly hysterical that at a national security summit, journalists felt that this was more important to ask about than nuclear security.

The video goes on to show that Dutch people, bowing to politically correct pressure, have made some changes to Black Pete’s appearance.  Now, instead of making Black Pete’s face black, they simply smudge some black stripes on his face in order to simulate chimney soot.

Blackface when it is used to degrade black people is certainly offensive.  But the P.C. police want it banned globally even when it features people just clowning around without having race on their minds, and a quaint local custom suffers for it.  Probably, in the long run, it won’t matter.  Once the Netherlands becomes an Islamic state, Black Pete’s run will probably come to an unceremonious end