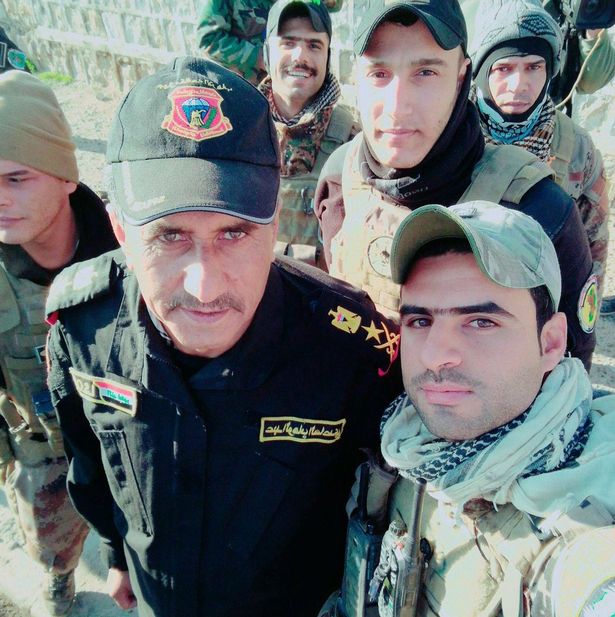 A soldier on a perilous mission to gather crucial intelligence deep behind Islamic State lines during the ferocious battle of Mosul shot dead six enemy fighters.

The fearless special forces hero Mohammed Qasim, dubbed the Lion of Mosul, disguised himself as one of the fanatics and conned them into believing he was one of them.

The Iraqi discovered the location of ISIS positions and key sniper and machine gun teams.

General Abdul Wahab al-Saadi said: “We are all very proud of what this soldier did. He is a very brave man. He makes us all hold our heads up high.”

As fighting continued to rage in the ruins of Mosul’s Old City in the last days of the battle in northern Iraq, Mohammed blended in with the IS troops by swapping his M4 rifle for an AK-47 and wearing a scruffy smock and scarf.

He and a comrade then sneaked behind enemy lines.

After noting down the vital positions and pinpointing where IS were holding ammunition, Mohammed quickly shot dead six of the fanatics.

Then he and his colleague picked their way back to their own lines and briefed commanders on what they had learnt.

Soon after that the Iraqi special forces ground troops were able to smash IS with mortar bombs and air strikes before launching a full-on infantry attack.

It is believed Mohammed’s mission, which took several hours last Thursday, may have saved the lives of scores of comrades and civilians.

His actions led him to being promoted in the field to the rank of lieutenant. Mohammed, originally from Basra, in southern Iraq, was fighting with the Iraqi special forces Golden Division, trained by the SAS in recent years.

A source said: “What this man did was incredibly brave.

“If he was captured he would have been tortured very slowly and held up as a trophy by Islamic State fighters. He didn’t even think twice when the idea came up and he made himself a volunteer immediately.

“Golden Division commanders knew their men were being pinned down by accurate IS fire and couldn’t work out exactly where it was coming from.

“So they approved a plan for an undercover operation, probably the most audacious of the entire operation, and Mohammed said he would do it, without a thought for his own safety.”

It is believed Mohammed’s comrades in the Iraqi Army avoided shooting at him after being briefed on what route he would take through no man’s land.

The battle of Mosul lasted almost nine months and involved around 130,000 troops from Iraq, Kurdish forces and Shia militia.

They were battling thousands of IS fighters from across the Middle East who had spent three years digging in and preparing defences.

Yesterday in Mosul Old City, Iraqi security forces were still searching for wounded IS fighters among the rubble of the destroyed town.

Most experts believe IS leader Abu Bakr al-Baghdadi has been killed.

There are reports of infighting between IS units in the few footholds the network still has in Iraq.

In Hawija, in the province of Kirkuk 110 miles south of Mosul, IS commander Abu Haitham al-Obaidi has reportedly declared himself the “new Caliph”.

Jabbar al-Maamouri, a senior commander in the Iraqi state-sponsored militia group, the Popular Mobilization Forces, said Obaidi was preparing for a “decisive” confrontation with his opponents in IS.

Maamouri added: “Hawija is bracing for bloody infighting among IS members, the most violent since the group took over Hawija in June 2014.”

He said the recapture of the city was an end of the self-styled caliphate declared by Baghdadi in 2014.

The Mosul campaign has resulted in thousands of deaths and displaced nearly 900,000 people.

Amnesty International has described the battle for Mosul as a “civilian catastrophe”, with more than 5,800 non-combatants killed in the western part of the city.

IS were accused of summary killings and using civilians as human shields, while Iraqi forces and the coalition are said to have failed to protect civilians.

But a senior British commander hit back. Major Gen Rupert Jones, the deputy commander of the international anti-IS coalition, said: “At no stage did they have the courtesy to engage the coalition to ask what our targeting process is.

“Firstly, the Iraqi security forces have put the safety of civilians as the absolute centrepiece of the liberation of the city over the last nine months – that is beyond question.

“Does that mean there have been no violations? No, of course there have, but whenever those are presented to the government of Iraq, they are taken very, very seriously.

“I would say it is the most sophisticated targeting and strike process in history.”

There is growing anger about the huge losses among the coalition of Kurdish Peshmerga, Iraqi troops, Iraqi police and Shia militia, thought to run into the “many thousands”.

Today it emerged the Iraqi parliament will interrogate Lt Gen Shaker Jawdat, the commander of the Federal Police, over claims he is guilty of

“delinquency” during the battle.

The parliament’s security committee chairman Hakem al-Zamili said: “Losses sustained by the Federal Police are the gravest compared to other security troops, which is evidence to his frail military command in battles.”