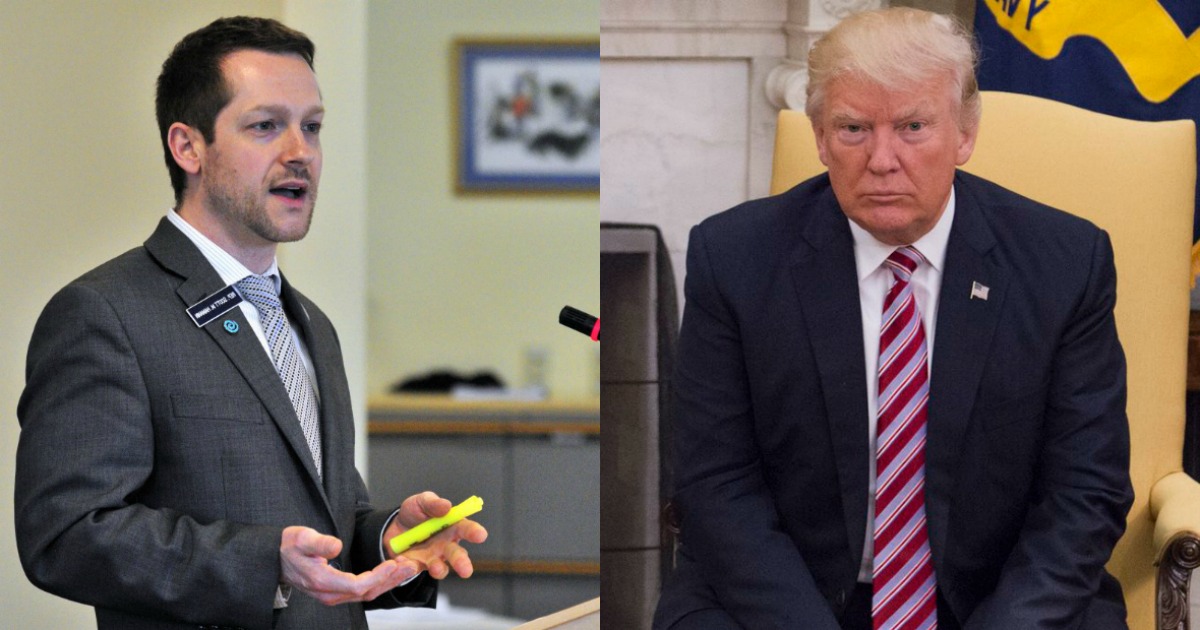 PORTLAND, Maine — State Rep. Scott Hamann, D-South Portland, has said he regrets a Facebook rant in which he seemed to imply he would harm President Donald Trump if given the chance.

“Trump is a half term president, at most, especially if I ever get within 10 feet of that pussy,” Hamann wrote in a lengthy Facebook post.

A screenshot of the post, in which Hamann writes that Trump was “installed by the Russians” and seethes against the president, his supporters and Republicans more generally, was widely circulated on social media beginning Tuesday evening.

Hamann did not respond to repeated requests for an interview beginning Tuesday night but said in a written statement Wednesday that he regrets making the “aggressively sarcastic” and “inappropriate” comments, describing it as “a Facebook exchange with a childhood friend.”

“This is not language I typically use, it does not reflect my personal values and, while misguided, it was intended to make a visceral point about the devolving political discourse in America,” Hamann said.

Threatening the president is a crime. The U.S. Secret Service is aware of Hamann’s statement and tracking the incident but has not opened an investigation, David Watson, resident agent in charge of the service’s Maine field office, said Wednesday afternoon.

In the Facebook post Hamann also draws a negative comparison between Trump and President Barack Obama — including a reference to the “Trump crime family” — blames Republicans for stymying the former president and taunts supporters of the current one.

“You’re a f—cking pussy. And you people are destroying America,” Hamann wrote. “100% of intelligent Americans agree that Trump is a complete loser.”

The statements came in a moment of political uproar nationally, following the revelation that during the 2016 campaign the president’s son had met with a Russian lawyer with the hope of receiving information damaging to then-presidential candidate Hillary Clinton.

Maine GOP Chair Demi Kouzounas decried Hamann’s statements as “unhinged and dangerous” and, through a spokeswoman, called on Speaker of the House Sara Gideon, D-Freeport, to ask for Hamann’s resignation.

“Words cannot even begin to describe the level of revulsion I feel after reading Representative Scott Hamann’s recent tirade that has come to light,” Kouzounas said in a statement. “Perhaps the most alarming aspect of this tirade is an implied death threat against our president.”

A spokeswoman for Gideon did not immediately respond to requests for comment.

Hamann, who is 36 and was elected to a third term last November, is not the first Maine lawmaker to face heat for comments made online in recent years. In 2015, Sen. Mike Willette, R-Presque Isle, resigned from his co-chairmanship of the Legislature’s State and Local Government Committee following controversy caused by his inflammatory Facebook posts about Obama.

The Good Shepherd Food Bank, where Hamann works as project manager, distanced itself from his statements in its own Facebook post Tuesday night, but did not respond to requests for comment.

Hamann’s statement “is a direct violation of our organization’s social media policy,” a post from the anti-hunger group states. “The views and opinions expressed by this employee are his own, and in no way reflect the views of Good Shepherd Food Bank.”

The screenshots of Hamann’s statements were first circulated on Facebook by conservative radio host Keith Hanson, who said he received them from a New Hampshire state representative.

On Tuesday night, Hanson, who hosts shows on FOX News affiliate radio stations WNTK in New Hampshire and WUVR in Vermont reached out to Hamann and Good Shepherd Food Bank over Facebook regarding the posts.

Hamann responded by saying he would pursue legal action against the radio host if the statements hurt his career, according to screenshots of their conversation provided by Hanson.

“And if anything negative comes from your attack on my employment, my attorney will be in touch,” Hamann wrote. “Cease and desist.”