Following the recent destruction of various confederate monuments in the south, next on the liberal hit list appears to be the largest bas-relief in the world – the giant stone carvings of Confederate generals on the side of state-owned Stone Mountain.

Many far left thugs have zeroed in on the carvings as their next victim. 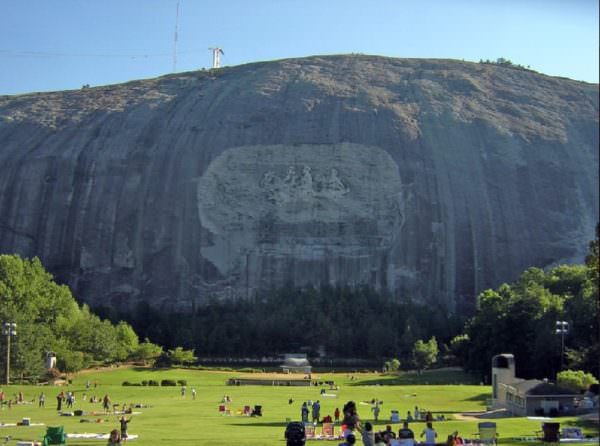 This week, Democrat candidate for Gov. Stacey Abrams released a statement calling for the destruction of the 158-foot-long bas-relief first started in 1923, according to the Atlanta Journal Constitution.

The African American Democrat called the monument a “blight” on Georgia, and slammed the monument as having been funded by the KKK, despite that it was the state and federal governments that paid for most of its creation.

Abrams made her case in a series of Tweets posted on August 15:

The removal of the bas relief of Confederates from Stone Mountain has been a constant debate since the state bought the property in 1958. /1

Paid for by founders of the 2nd KKK, the monument had no purpose other than celebration of racism, terror & division when carved in 1915. /2

Liberals have been making efforts to tear down the monument since the Charleston church shooting in summer of 2015.

But the visible image of Stone Mountain's edifice remains a blight on our state and should be removed. /6

Breitbart provided some of the monument’s history:

While lost cause supporters did organize to initiate the project back in 1915, their money ran out quickly, and their support stopped when only one figure was fairly begun. In fact, the project laid fallow for 36 years until the state and the federal government became involved in the late 1950s and floated the funds to finish the carvings.

The site was purchased by the state of Georgia in 1958, but the sculpture was still incomplete due to the two World Wars, funding problems, and numerous missed deadlines and disputes. It was not completed until 1972. Indeed, in 1960 when the state purchased the property, the agreement that allowed the Klan to meet on the grounds in perpetuity was canceled by the state.

This is the final boss of confederate monuments. We're not stopping unless we replace these scumbags with Outkast. pic.twitter.com/HdqepIDTwe

Even North Carolina’s governor agreed with sentiments to remove the monument, claiming “These monuments should come down.”

It’s time to move forward. These monuments should come down. – RC https://t.co/Lw9m6ZYbQJ