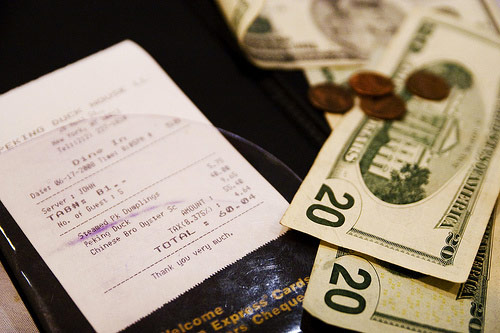 Hoping to get a good tip? Seek out the table with the most conservative men from New England. A new survey finds men, Republicans, and residents of the northeast are the best tippers.

Women tip a median of 16 percent, while Democrats and southerners leave a median 15 percent at a restaurant, according to a new survey of more than 1,000 American adults conducted by Princeton Survey Research Associates International on behalf of CreditCards.com. That’s compared with the median 20 percent that men, Republicans, and northeasterners leave. Those who pay with plastic leave a median 20 percent, compared with 15 percent for those who pay in cash.

Though roughly half of people tip between 16 percent and 20 percent, about a fifth of restaurant goers polled admitted to stiffing the wait staff at least occasionally.

Tipping isn’t customary worldwide, but it’s a critical source of income for nearly all American service workers. The federal minimum wage for tipped employees is just $2.13. Such workers rely on the collective whim of their customers for the remainder of their earnings.  (A handful of states have a higher minimum wage for such employees, including Alaska, California, and Oregon.) 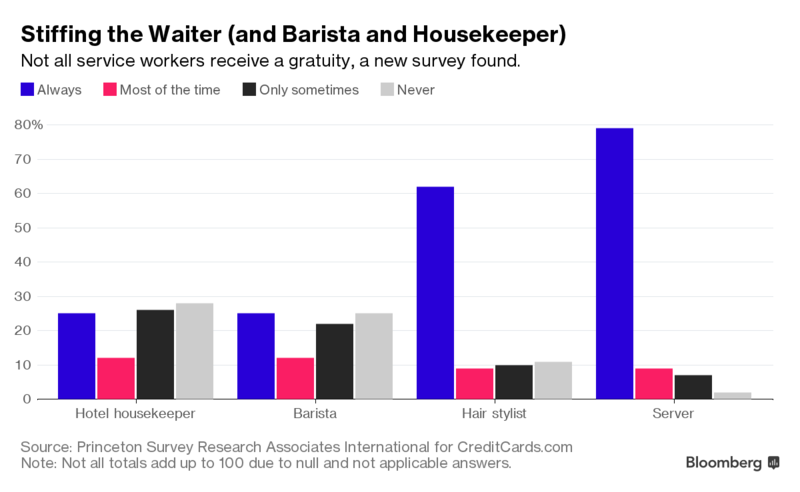 There’s a discriminatory nature to tipping, advocates of alternative payment options argue. “The typical full-time, year-round female server is paid just 68 percent of what her male counterpart is paid ($17,000 vs. $25,000 annually),” a February 2012 report from the Restaurant Opportunities Centers United found. “The gender pay gap is even larger for women of color. Black female servers, for example, are paid only 60 percent of what all male servers are paid.”

The report found that, among more complex gender and economic reasons, these servers were paid less because women, particularly women of color, more frequently worked at fast-food and family-style establishments, rather than in fine dining, where tips are higher.

There’s been a recent trend against tipping, with some restaurants factoring the service charge into the cost of their products. Famed restaurateur Danny Meyer nixed tipping at his restaurants entirely. The majority of restaurants, however, still have tipping policies.

Issues with tipping extend beyond the restaurant industry. The survey found that 31 percent of those surveyed never tip their housekeeper when staying at a hotel and 30 percent never tip their barista at a coffee shop. Hair stylists and barbers fared slightly better: Only 12 percent of those polled stiffed these workers. Women were more likely than men to tip in all three of these scenarios.