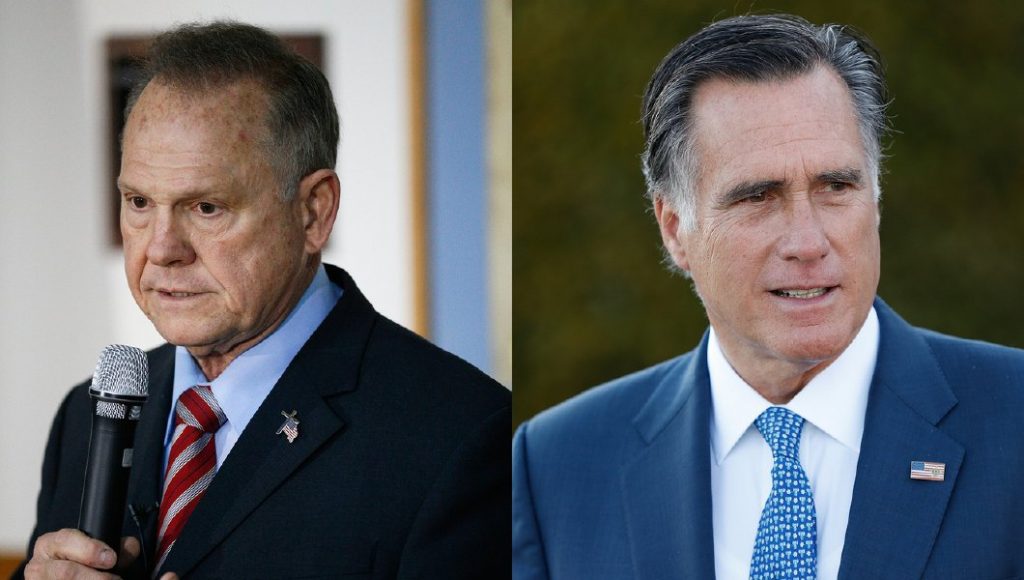 The male version of Hillary Clinton is making his return to the public domain once again to dispense nuggets of nonsense that nobody ever cared to hear back when he was a player.

Willard “Mitt” Romney, the man who just won’t go away has reinserted himself into the political realm as he prepares to launch a U.S. Senate bid in the state of Utah (provided that Orrin Hatch retires) where he will emerge as the leading “Republican” voice against President Trump.

The Mittster shit his britches by blowing the 2012 election to a Barack Obama who was just begging to be defeated and like the other imbecile who lost to Obama – John McCain – can’t just self-exile himself for the shame that he has brought upon this once great nation.

Go after Alabama’s Roy Moore on the same day that Trump happened to bestow his formal endorsement on the local hero who has been the victim of one of the most savage and dishonest smear campaigns in modern political history.

The world according to Mitt? Roy Moore must NOT be allowed into the Senate because he would be a “STAIN” upon the GOP and the nation.

Translation: Screw the voters in Alabama, the elitist snobs like Romney are calling the shots here.

Roy Moore in the US Senate would be a stain on the GOP and on the nation. Leigh Corfman and other victims are courageous heroes. No vote, no majority is worth losing our honor, our integrity.

To which the combative Moore replied:

Either @MittRomney has lost his courage or he doesn’t care about truth anymore. Sad day!

America’s reawakening was led by @realDonaldTrump, not you Mitt.#DefeatTheElite #DrainTheSwamp

Romney has made it very clear about how he feels about Trump and other MAGA candidates but you have to wonder where this kind of fight was in 2012.

Had Mitt expended even 1/10 of the energy against Obama that he has done against Trump and now Moore, the country would have been spared of four years of hell that isn’t going to be quickly or easily cleaned up by wimps like Romney.

(By Don Marten and reported by the Downtrend)  https://downtrend.com/donn-marten/mitt-romney-roy-moore-would-be-a-stain-on-the-nation  (December 6, 2017)