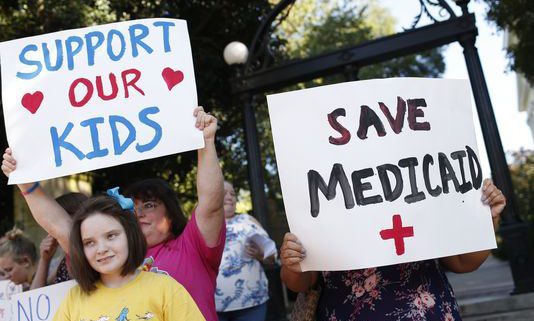 Senate Majority Leader Mitch McConnell unveiled the revised version of the GOP health care bill on Thursday, which added provisions meant to entice both the conservative and left-leaning members of the Republican Party. And despite the fact that the Congressional Budget Office had yet to release their report on the revisions, the Big Three Networks (ABC, CBS, and NBC) wasted no time in tearing it down with the usual fake news of massive cuts to Medicaid.

During ABC’s World News Night, Anchor David Muir acted as though he was sounding the alarm for the American people. “In the meantime, to major developments of Capitol Hill tonight. The new Republican plan to repeal and replace Obamacare, but how would it affect seniors in the country, people with preexisting conditions, and Medicaid, which covers millions of Americans,” he anxiously warned.

“But critics worry Americans that need the most care, like people with pre-existing conditions could end up paying a lot more. Under this bill, so could seniors,” ABC’s Mary Bruce declared. “It also leaves in place those deep cuts to Medicaid, initially projected to be nearly $800 billion.”

The newest version of the bill added a proposal by Senator Ted Cruz, dubbed “the Consumer Freedom Amendment,” which allows insurers to offer cheaper plans that cover extreme emergencies for those who choose to purchase it.

Bruce appeared to be put off by the idea of consumer choice in purchases health care that suited their needs. “To appease conservatives, the new version would allow insurers to offer cheaper bare bones plans that don’t cover essential health benefits,” she said in a dismissive tone.

On CBS Evening News, Correspondent Nancy Cordes defending the ObamaCare tax hikes that the bill left in place, which conservatives hated. “But it does not reverse the first bill’s deep cuts to Medicaid, the big sticking point for moderates like Ohio’s Rob Portman,” she added as a way to cut down the bill.

The network ran a second segment about the bill, where reporter Omar Villafranca traveled to Kentucky to assert that McConnell’s bill would hurt his constituents. He spoke with one resident who was “on a fixed income and uses Medicaid to help pay her mounting healthcare bills,” which cost her $945,000 last year.

“Nothing that we’ve advocated so far would cause anybody currently on Medicaid to be taken off of Medicaid,” McConnell said in a clip Villafranca played. But the CBS journalist tried to discredit him by falsely claiming that “right now the bill calls for significant cuts in federal funding of state Medicaid programs.”

“I’m sure Mitch McConnell don’t have to worry about his medical bills or Governor Bevin’s, but real people have to,” the woman told Villafranca. He explained that she was scared of losing her insurance. Of course, she’s afraid, every liberal journalist has been falsely claiming deep cuts to Medicaid.

NBC’s Kasie Hunt appeared on NBC Nightly News and made that same accusation of purported Medicaid cuts. “The new bill doesn’t restore any of the deep Medicaid cuts,” she stated. “And it includes a conservative proposal allowing people to buy cheap catastrophic insurance without required ObamaCare benefits like maternity and mental health services.”

But shockingly, Hunt actually talked with a small business owner who was feeling the pain of ObamaCare. “There has got to be a better way to provide insurance for everybody but to also level the playing field so that small businesses aren’t at a disadvantage,” they said. Hunt also noted how the business owner’s “insurance deductibles for her 19 employees have quadrupled under ObamaCare.” Too bad NBC and the other networks ignore their plight most of the time.

The Media Research Center has exposed the Big Three Networks’ bold-faced lies of cuts of to Medicaid time and time again. They keep insisting there were cuts to Medicaid despite the fact that the Congressional Budget Office’s own report on the bill says otherwise. CBS had even attacked Senate Republicans claiming the blood of innocent people would be on their hands. Their accusations are truly deplorable and #FakeNews.