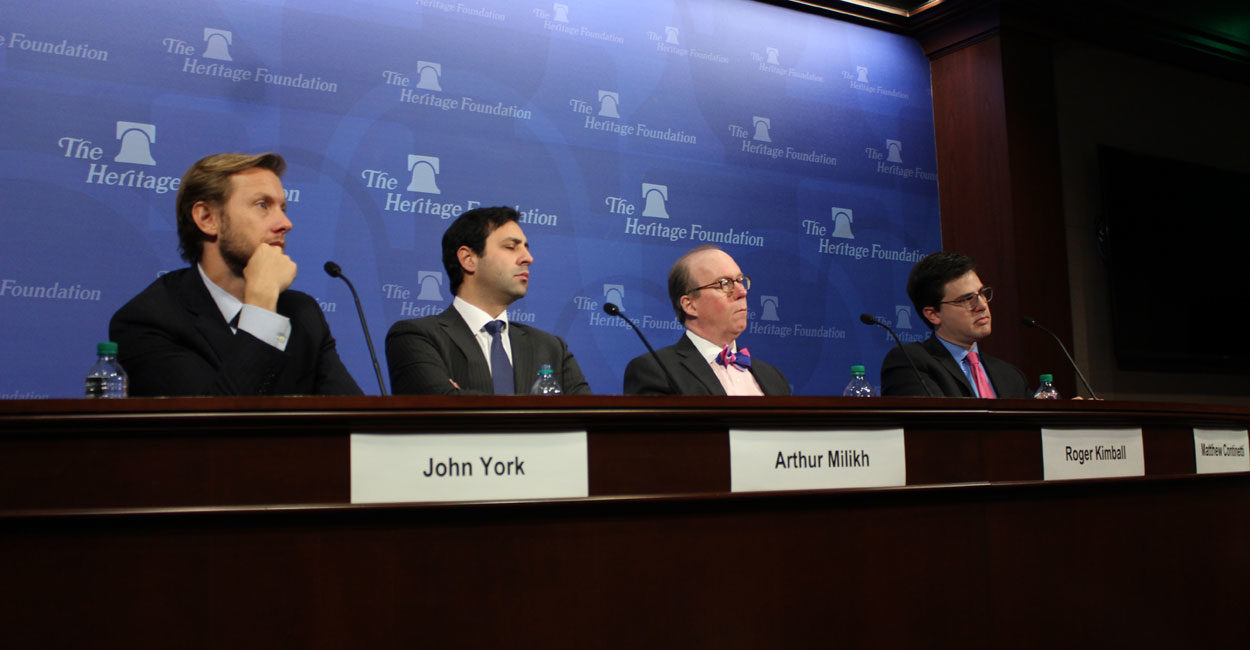 The mainstream news media are arrogant and guilty of groupthink, but their onetime monopoly control of the narrative on the news happily is being eroded by new media, critics of the legacy media say.

That was the takeaway from a panel discussion at The Heritage Foundation, “The State of the Press: Whose Interests Does It Serve?”

Arthur Milikh, associate director of the B. Kenneth Simon Center for Principles and Politics at Heritage, opened the discussion at the Oct. 31 event by asking rhetorically whether the press serves the public—or governs it.

He said that the news media want “the First Amendment to read ‘Congress shall not abridge the freedom of the press, which shall be beyond criticism, for the press is the news media, and they should be free to rule the public mind.’”

He said that the news media think that the First Amendment protects their expression without exception, and that they shouldn’t face consequences for their actions even when warranted.

In the Founding Fathers’ vision, Milikh said, the press had two purposes: to spread knowledge of new scientific discoveries, while also debunking false claims and to confront false political dogmas.

But there was and still is a bad side to the press, Milikh said, noting that Benjamin Franklin likened the news media to a court of law, bringing together claims and making judgment on cases. In this case, however, there’s no jury to weigh facts, oaths to swear to, or anything else to ensure that the reports are factual and fair.

Milikh said that Franklin contended that the press gets its power from humanity’s affinity for resentment of others and for destroying them.

“Today,” he said, “the press even says, ‘Look at your president. He’s insane. He’s unhinged. He’s lost it. He’s unstable.’ This is a kind of flattery to the public that Franklin warns about.” In essence, Milikh explained that the news has more interest in catering to the emotions of its audience, no matter how poisonous, than keeping their content balanced and truthful.

While Milikh provided a brief history of news, Roger Kimball, the editor and publisher of the New Criterion and president and publisher of Encounter Books, addressed current issues surrounding the news business.

“Increasingly,” Kimball said, “the news media [have] been less interested in the news than [they have] been in perpetuating the narrative.”

He said that news should be interested in “the desire of empirical truth,” but he explained that the narrative is an “ideological construct” that favors power over truth.

Kimball described CNN, the New York Times, the Washington Post, MSNBC, Vox, and the Huffington Post, among other mainstream news media outlets, as a “fetid midden of festering mendacity” that helps sprout new lies whenever previous ones are disproven.

The use of unnamed sources, exaggeration of facts, and other tricks, he said, are used as a means to an end; namely, to spread a false narrative.

Matthew Continetti, editor in chief of the Washington Free Beacon, explained that when the panelists were talking about “the media,” they were talking specifically about the “elite news media.”

As recently as the 1960s, he noted, there were only a few select national news outlets, including the New York Times and the Wall Street Journal.

These and many other large news outlets, Continetti said, are only accountable to themselves. They “tell you what to think about what happened,” as opposed to just telling what happened and letting you decide for yourself.

He suggested that more media are needed to challenge the groupthink of the elite news media, adding that social media are already doing just that.

“We’ve gone from a situation where we rely on those small [corps] of impudent snobs to tell us what to think,” Continetti said, “to a much larger universe of conservative media outlets … to a social universe where everyone who has a Twitter account or a Facebook account or a phone with Facebook Live can broadcast the news.”

(First reported by Ian Snively and published by the Daily Signal) http://dailysignal.com/2017/12/07/news-is-suffering-from-groupthink-say-critics/   (December 7, 2017)