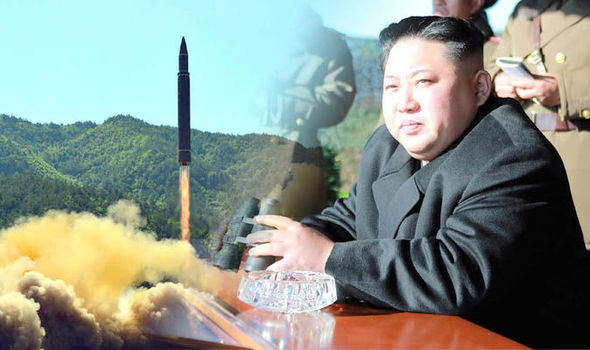 SEOUL/TOKYO (Reuters) – North Korea fired a missile on Friday in an unusual late-night test launch, and details announced by officials in Japan, South Korea and the United States suggested it was an intercontinental ballistic missile (ICBM).

The launch from North Korea’s northern Jangang province took place at 11:41 p.m. (1441 GMT), an official at South Korea’s Office of the Joint Chiefs of Staff said. The U.S. Defense Department confirmed the launch.

“As a result of their launches of ICBM-level missiles, this clearly shows the threat to our nation’s safety is severe and real,” Japanese Prime Minister Shinzo Abe said.

South Korean military said the missile was believed to be an ICBM-class, flying more than 1,000 km and reaching an altitude of 3,700 km. The U.S. Pentagon also said it had assessed that the missile was an ICBM.

The data on the trajectory indicate the missile was fired at a sharply lofted angle but packed more power than a missile launched earlier this month that U.S and South Korean officials said was an intercontinental ballistic missile (ICBM), potentially capable of hitting the mainland United States.

The North claimed after the July 4 launch that it had successfully tested an ICBM that flew 933 km (580 miles), reaching an altitude of 2,802 km over a flight time of 39 minutes and able to carry a large and heavy nuclear warhead.

U.S.–based missile expert Michael Elleman of the International Institute for Strategic Studies said Friday’s test was possibly of a similar missile with a more powerful second stage, but stressed it was a preliminary assessment.

Jeffrey Lewis of the California-based Middlebury Institute of International Studies said the night launch, which was not unprecedented, was significant in demonstrating the ability to disguise the launch.

“A launch from an unexpected place at night demonstrates that we can’t find the missile before they fire it. My guess is the North Koreans wanted to show us that they weren’t trying to hide the launch, but can if they want.”