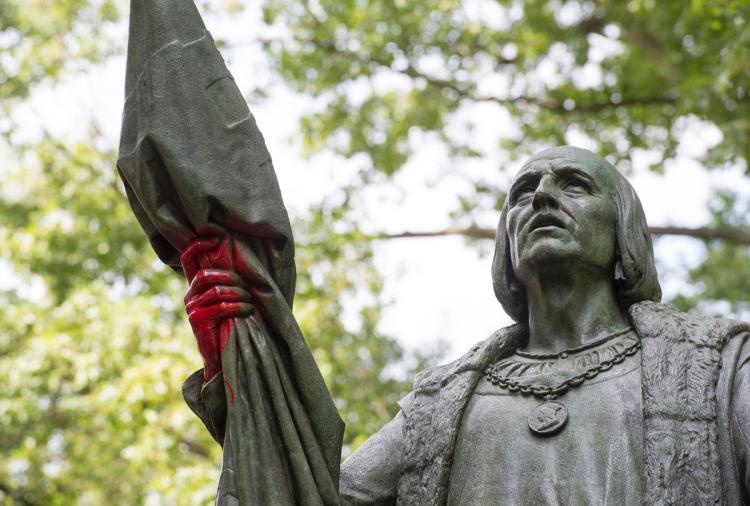 MRC Culture has argued before that once all the Confederate statues have been dismantled, suspicious subway tiles retired and any surviving Dukes of Hazard cars been sent to the Earl Scheib Paint Booth and Ideological Reeducation Camp, the left’s War on Inanimate Objects is going to continue.

The New York Post’s Karol Markowicz agrees, writing on September 17 that “America’s culture of idol worship and public defenestration has come for anything set in stone.” She cited the vandalism of a Central Park statue of Christopher Columbus, of Wall Street’s “Charging Bull,” of Baltimore’s Francis Scott Key monument, and the draping of a Thomas Jefferson statue on the campus of UVA.

“Liberals scoffed,” Markowicz noted, at warnings from President Trump and others that statue vandalism was a “slippery slope.”

In fact, Mayor Bill de Blasio (D-Nicaragua) has already opened the war’s new front in New York, forming a commission to review and possibly eliminate “oppressive” monuments throughout the boroughs. And Christopher Columbus, with his huge statue in the Circle that bears his name, is a prime target. Markowicz quoted City Council Speaker Melissa Mark-Viverito saying Columbus should be airbrushed from the city because of “[the] oppression and everything that he brought with him.”

To which Markowicz had this eminently sensible rejoinder:

But what he brought with him was an opening and connection of the entire world, the discovery of new lands and the beginning of America. To discard Columbus is to discard all of the good that came from his discoveries as well.

The left, of course, thinks no good came from his discoveries – certainly, if Columbus were responsible for nothing else, his contribution to the creation of the United States is enough to damn him for the ages. In Markowicz’s words, “The war isn’t on history; it’s on anything that isn’t specifically leftist — now, today, subject to change tomorrow.”

And it’s about power, as Markowicz makes plain in the case of de Blasio’s hypocrisy:

Meanwhile, the mayor has no plans to skip out on the annual Columbus Day Parade down Fifth Avenue next month. Tearing down a statue of Christopher Columbus is one thing, but skipping a campaign event a month before the election is apparently too extreme a step. Let’s not be rash about this, right Mr. Mayor?

Apparently, unlike Los Angeles, the Italian-American vote is worth something still in New York.