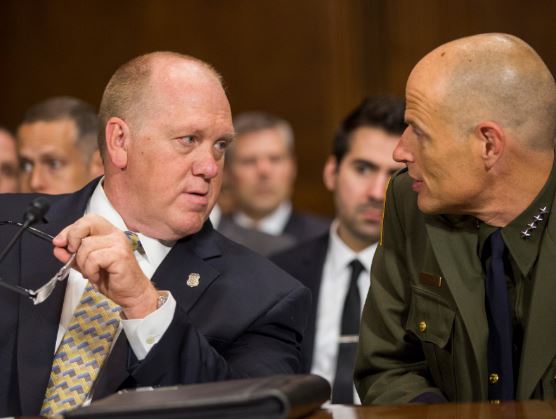 The acting director of U.S. Immigration and Customs Enforcement (ICE) under the Trump Administration is the same bureaucrat responsible for overseeing the release of violent criminal illegal aliens into U.S. communities under the Obama Administration. The acting director, Thomas Homan, previously headed Obama’s Enforcement and Removal Operations (ERO), a position where Homan helped direct the release of criminal illegal aliens. Homan received an award from President Obama for his work on immigration matters.

The agents and officers in the National ICE Council are sounding the alarm that such a bureaucrat would somehow be chosen by the Trump Administration to lead a flagship effort such as immigration law enforcement. ICE Council President Chris Crane, also an ICE Officer, spoke with Breitbart Texas and painted a dismal picture of the politics playing out in how our nation’s immigration laws are enforced.

“It is a disgrace that the man who oversaw Obama’s effort to release criminal illegal aliens into our country is now the acting director of ICE,” said Officer Crane. “Someone under Trump has been allowed too much authority in choosing the worst possible Obama-holdover to lead the vital effort of enforcing our nation’s immigration laws.”

Officer Crane continued, “Acting Director Homan should not be elevated, he should instead be held accountable. Just as Former Attorney General Eric Holder should have been held responsible for Operation Fast and Furious which resulted in Border Patrol Agent Brian Terry’s death, Thomas Homan should be held accountable for every criminal illegal alien released during his ERO leadership during the Obama Administration.”

The ICE Council’s decision to speak out was in large part due to Acting ICE Director Homan attending a roundtable White House meeting with family members of victims of illegal alien crimes on June 28, 2017, said Officer Crane. “Again, the Obama-holdover [Homan] was previously the director of ERO and responsible for the release of criminal illegal aliens into U.S. communities. Such a person being brought to this event made us realize that we had to speak out. Political forces are trying to promote this Obama-holdover and we don’t think the American public or President Trump would allow this if they realized what role Acting Director Homan played only months ago in the deluge of our borders and our nation’s sovereignty. There is no telling how many more American families will be in pain and suffer the loss of a loved one as a result of what Acting Director Thomas Homan did during Obama’s administration.”

Breitbart Texas contacted ICE for comment and an intense exchange followed — one that highlights the ICE officers’ concerns about Acting Director Homan. The ICE spokesperson implied that Homan was simply following Obama’s orders and sent a transcript of Homan’s words to the press from the White House roundtable event mentioned prior in this piece.

I’m asking what role the deputy executive associate director of ERO plays in releasing criminal illegal aliens into the U.S.? I’m referring to people in ICE custody, not people who were let out because ICE detainers were not honored by other jurisdictions.

If the ERO director is not making such calls, who is making them? Directly?

… you do understand that the position you’re asking about is held by career law enforcement professionals – civil servants not political appointees, right? Civil servants enact the policies directed to them by the executive branch – they don’t have the luxury of creating those policies. This includes the position Mr. Homan held under the previous administration.

If you are attempting to suggest that Mr. Homan is not a vigorous defender of immigration enforcement, the hard working agents and officers of ICE and the public safety and national security of this country, then you could not be more wrong. He has dedicated his life to these efforts. Any suggestion to the contrary amounts is foolish and absolutely without merit.

I note your rigorous defense of Homan, but someone in ICE leadership made the decision to carryout policies that posed a real threat to U.S. citizens. A career employee made the decision to carry out the policy of ordering the release of tens of thousands of criminal illegal aliens, some of them murderers and sex offenders. These criminals were released into U.S. communities.

“My boss told me to” is not a defense in regard to such extreme circumstances. Honorable men and women resign, sound an alarm to Congress, or otherwise attempt to take advantage of whistleblower protections before putting U.S. citizens at risk with such policies. They do not follow orders that any reasonable person would know will result in harm to U.S. citizens so that they can keep their job or continue a forward trajectory in their career. In such a circumstance, “I had to follow the order if I wanted to keep my job” fails to rise to the level of a reasonable defense.

Did Acting ICE Director Homan, in his role as ERO director under Obama, do any of these things mentioned above? Did he in any way formally protest what he was being told to do? Is there any documentation that Acting Director Homan in any way objected, sounded an alarm, or notified Congress that the Obama Admin wanted murderers, sex offenders, and tens of thousands of other criminal illegal aliens to be released? Or did he follow the orders blindly?

What Acting Director Homan is currently saying (which happens to be what is pleasing to the current administration) sounds amazing! Why didn’t he speak out and say these things under the Obama Admin? These are the questions being raised by the ICE Council and the officers and agents whom they represent.

Acting Director Homan’s own recent words condemn his previous choices. He himself is saying that such releases of criminal aliens pose a significant risk to U.S. communities. This is exactly what the ICE officers are saying and asking for an account on.

The ICE officers attribute the choice to follow orders and release criminal illegal aliens into U.S. communities to Acting Director Homan in his previous role in ERO under Obama. Was this, in fact, his call? If not, specifically who in ERO made the call?

Breitbart Texas reached out again to the ICE Council for another response. ICE Council President Chris Crane responded, “ICE is playing a semantics game. Acting Director Homan did not utilize any of the tools at his disposal to sound an alarm on the release of criminal aliens into U.S. communities. He blindly followed Obama’s orders even though he knew it posed dangers to Americans.” Officer Crane continued, “Acting Director Homan had to choose between career advancement or speaking out on orders that would risk the lives of American families. He chose his career instead of public safety. Trump should not allow a man like Homan to direct ICE. Not only do our ICE officers deserve better, but the American people we help protect deserve better. This is not draining the swamp. Homan is the swamp.”

Acting Director Homan did not just follow orders, but he received the Presidential Rank Award from Obama for his “exemplary leadership and extensive accomplishments in the area of immigration enforcement,” according to DHS Secretary Kelly in a press release on Homan being appointed by Trump.

A previous report highlights the “accomplishments in the area of immigration enforcement” for which Homan was rewarded under the Obama administration:

“One-quarter of these 30,000 criminal aliens had been convicted of level one crimes, such as murder, rape, and sexual abuse of a minor. Of those 30,000, only 8 percent were Zadvydas cases,” Smith said referring to the Supreme Court case that prevents the indefinite detention of certain immigrants.

Another report provides even more detail on what the leadership of ICE participated in during Obama’s tenure:

The U.S. Immigration and Customs Enforcement agency in 2015 decided not to deport but release 19,723 criminal illegal immigrants, including 208 convicted of murder, over 900 convicted of sex crimes and 12,307 of drunk driving, according to new government numbers.

DHS Secretary Kelly strongly advocated for Homan to be appointed as Acting Director of ICE, even though Homan was Obama’s deputy executive associate director of ERO, which means he was, in fact, the ERO director, according to ICE Officer Crane.

Further emails with ICE showed a shift from the assertion that Homan was just following orders and ventured into a list of others reasons, blaming the courts and foreign nations for refusing to accept the criminals back from the U.S. A previous contentious exchange during Congressional testimony between Rep. Jason Chaffetz (R-UT) and former ICE Director Sarah Saldaña discredits such defenses and Acting Director Homan’s own description of his former job duties show that the ICE failures mentioned by Rep. Chaffetz were indeed in Homan’s wheelhouse.

Acting ICE Director Homan described his role on his LinkedIn profile in this way:

As the Director for ICE Enforcement and Removal Operations (ERO), I am responsible for promoting public safety and national security by maintaining direct oversight of critical ICE programs and operations to identify, locate, arrest, detain and remove illegal aliens from the United States. …

Responsible for establishing and maintaining effective working relationships with various high-level individuals, including Members of Congress and their staffs, other legislative and executive agencies, executives of major corporations, and distinguished members of the public. Maintain close and cooperative working relationships with senior agency officials, government agencies, and other institutions with related interests, in order to advance the programs and objectives of ICE and ERO. Routinely work closely and collaboratively with other law enforcement officials at the highest levels of Federal, State, and local governments, as well as intelligence organizations and international law enforcement entities.

The first defense ICE offered for Acting Director Homan was to insist he was just following Obama’s orders. When pressed, ICE defended Homan by insisting that other nations refused to accept back their criminals; however, Homan’s own LinkedIn suggests it was his own responsibility to advocate for the Department of State to pressure foreign nations to take back the criminal aliens. Breitbart Texas reached out again to ICE and asked if any documented efforts existed where Homan resisted the release of criminal illegal aliens into U.S. communities. ICE refused to answer the question and responded that Breitbart would have to use FOIA to obtain such information.