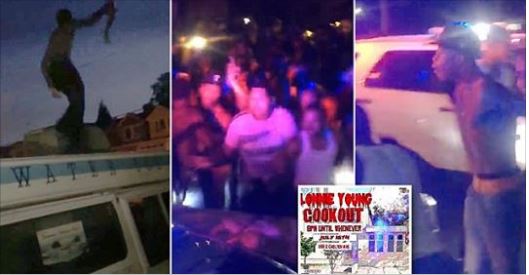 Police told CBS Philadelphia that a large crowd — mostly made up of children between the ages of 12 and 17 — appeared in the street and on the sidewalk outside of the Lonnie Young Recreation Center in Germantown around 6 p.m. Sunday.

Cops say the teens hurled glass bottles at them, jumped on their cars, and taunted the officers.

Police commanders decided not to arrest any of the teens for fear the situation would escalate.

The crowd disbursed finally around 11 p.m. and did not reassemble.

The Associated Press reports that none of the teens nor officers were injured, although police did ask stores in the area to close when the teens started to pour into the shops.

Techner added that parents should keep an eye on their kids and enforce a curfew.

“Parents have to be aware of what their kids are doing, who they are with, and what they’re getting involved in. They need to be home at a decent hour,” he said.

Other flash mobs of teens have taken place throughout Philadelphia. In March, a flash mob of more than 100 teenagers broke out into fights and ran in and out of traffic. Police arrested more than 30 teens, 20 of them for disorderly conduct and a few on more serious charges.