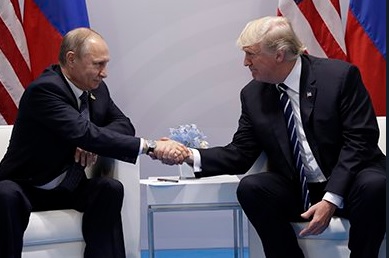 In May, media reports indicated the Trump administration was considering returning two compounds—one in Maryland and one in New York—to Russia.

Those compounds were seized by the Obama administration last December in response to Russian interference in the 2016 U.S. election.

Last week, in an interview with CNN, a senior White House official again raised the possibility of returning the compounds to Russia, saying the administration may do so “because we want to give collaboration, cooperation a chance.”

Doing so, however, would be a huge mistake. Giving back the espionage compounds today in the hopes of seeing improved behavior from Russia in the future is naïve, and it would only serve to embolden Moscow. The administration should avoid this error.

When the Obama administration seized the compounds last year, it simultaneously expelled 35 Russian officials. The compounds are located in Long Island, New York, and in Queens County, Maryland, along the state’s eastern shore.

Russian intelligence operatives in the U.S. reportedly utilized the properties, which house tennis courts and swimming pools for espionage activities.

At the time, officials from the Obama administration stated: “These diplomatic compounds were being used for intelligence purposes. That is a direct challenge to U.S. national security.”

The use of the facilities for spying has been known for decades. The Reagan administration reportedly believed the New York compound was used to spy on nearby defense industry targets by means of electronic surveillance.

The Obama administration reportedly threatened to close the compounds earlier in 2016 in response to Russia’s harassment of U.S. diplomats overseas. The Obama administration threatened to close the compounds unless the harassment stopped and until Russia lifted its freeze on the construction of a new U.S. consulate in St. Petersburg.

The Trump administration is reported to be weighing a decision to return the compounds, although possibly adding new restrictions such as a removing the diplomatic immunity of the compounds.

This is the wrong course of action. The U.S. should not give Russia something for nothing. Rather, U.S. strategy toward Russia should be to impose costs on the Kremlin for undesirable actions, such as its interference in the U.S. election.

Russia remains a significant threat to the United States and our allies, chiefly those in Europe. If Russia wants the compounds returned, it should first return Crimea to Ukraine and cease the ongoing war in the country’s eastern oblasts.

But again, nothing indicates Russia is apt to change its behavior. Russia is actually doubling down on its espionage activities in the United States.

Just last month, reports exposed that Russian intelligence operatives working in the U.S. are thought to be mapping U.S. telecommunications infrastructure, often turning up all around the country, near fiber optic cables.

Rather than changing Russian behavior, Russian President Vladimir Putin is hopeful he can fool another U.S. administration into believing Russia will be a reliable partner for the United States. President Donald Trump should not take the bait.

Russia’s reaction to news that Trump is considering returning the compounds is illustrative. Russia’s Foreign Ministry issued a new threat to the United States, saying that if the compounds are not returned, Russia “will have to take reciprocal measures.”

If Trump accedes to Russia’s demands, however, the Kremlin will only see it as a sign of weakness.

President Donald Trump must approach Russia from a position of strength. Russia’s behavior does not merit a reward, and it is in the United States’ interest not to return the compounds until Russia makes genuine, long-lasting changes to its behavior—when its belligerence and aggression toward the U.S. and its allies ceases.