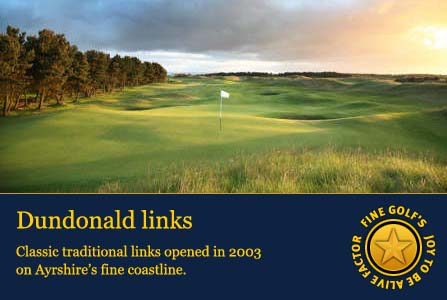 The Scottish Open was held at the Dundonald Links Golf Course in Ayrshire, where on Sunday Rafa Cabrera-Bello won by birdieing the first playoff hole to defeat Callum Shinkwin.

In a wordplay kind of way, it’s a bit ironic that “Dundonald” can host the Scottish Open, but an equally beautiful course “Trump International Golf Links”, also located in The Home of Golf, may never get the chance.

Martin Gilbert, the chief executive for Aberdeen Asset Management, the title sponsor of the event, says he loves Donald Trump’s incredible Scotland golf course, but, according to the Associated Press, he is not interested in bringing the Open there because of the controversy that surrounds the president.

“Trump (International), I don’t need to tell you, is a great golf course, but there are issues if we went there. The worst thing would be if he came. No decision has been made, but, look, there are clear issues, shall we say.

“Politics aside, Trump (International Golf Links) would be an ideal venue, but you can’t put politics aside. That is the issue so we will wait and see.”

In this sports writer’s humble opinion, Gilbert’s comment that “the worst thing would be if he came,” which so easily rolled off his lips, is so disrespectful to the 45th president of the United States, that all American PGA players should boycott the event until the chief executive apologizes or resigns for the insult.

In 2015, while visiting the course that bears his name, Trump asserted, “the Scottish Open is coming.” But with leftists like Martin Gilbert heading up the tournament’s title sponsor, it’s unlikely that will ever happen.

In 2015, the PGA of America canceled its Grand Slam of Golf at Trump’s course in Palos Verdes, CA, because of comments he made while campaigning for president about protecting America’s southern border from illegal aliens.