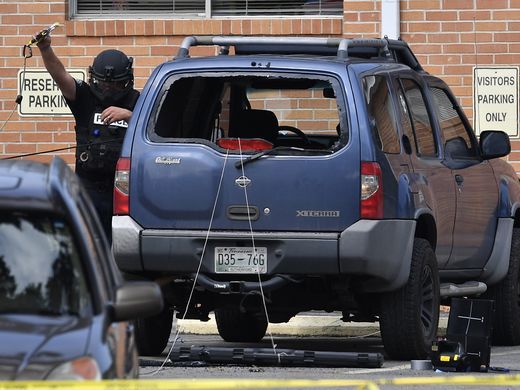 At approximately 11:15 a.m. local time on Sunday, a masked gunman entered the Burnette Chapel Church of Christ in Antioch, Tennessee, and opened fire.

One person has been killed, and at least seven others wounded.

According to ABC News: “A church usher who ran up and confronted the gunman was pistol-whipped by him…police spokesman said. During the struggle, the gunman unintentionally shot himself in the left pectoral. At that point, the usher went to his car, where he got his weapon to confront the shooter again.”

It’s unclear if the shooter’s accidental self-injury caused him to stop his attack, or if it was the usher with his personal firearm. Regardless, the attack ended at some point during that scene.

According to the Nashville Fire Department, which has been keeping the public informed via Twitter, “all of the wounded,” the majority of whom are “over 60,” were “transported to area hospitals.”

The shooter, who has been identified as “a Rutherford County man in his mid 20s,” is alive, and being treated at a local hospital, while church-goers who weren’t injured are being interviewed by police.

The shooting today at Burnette Chapel Church of Christ is a terrible tragedy for our city. Full statement: https://t.co/vk6DOxuMPc pic.twitter.com/x3UsUPDmA9

This is a terrible tragedy for our city. My heart aches for the family and friends of the deceased as well as for the wounded victims and their loved ones. Their lives have been forever changed, as has the life of their faith community at Burnette Chapel Church of Christ. My administration, especially the Metro Nashville Police Department, will continue to work with community members to stop crime before it starts, encourage peaceful conflict resolution, and promote nonviolence.