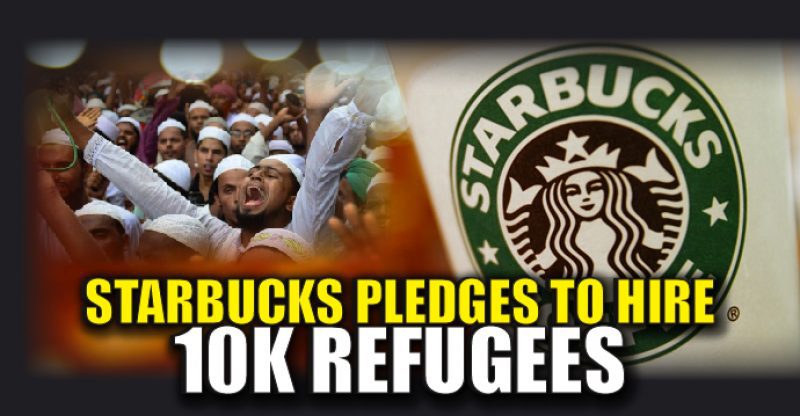 Starbucks held a hiring event exclusively for refugees in El Cajon, California on Tuesday, part of its recently announced commitment to hire more than 10,000 refugees over the next five years.

El Cajon is located in San Diego County, where more than 20,000 refugees have have been resettled by the federal government in the past nine and a half years since the beginning of Fiscal Year 2008.

A 2013 study from a research team led by Dr. Timothy Rodwell, “an associate professor and physician in the Division of Global Health at UCSD [University of California at San Diego]” that “analyzed data from LTBI [latent tuberculosis infection] screening results of 4,280 refugees resettled in San Diego County between January 2010 and October 2012,” noted that “San Diego County, in California, is a leading refugee resettlement site, and it also has one of the highest rates of active TB in the country, with an incidence rate of 8.4 cases per 100 000 people in 2011.” (The incidence rate in the entire population in the United States in 2016 was 2.9 per 100,000).

The study, which was funded in part by the National Institutes of Health, found that, of the 4,280 refugees resettled in San Diego County during the 34 months beginning in January 2010:

About four percent of the entire population of the United States tests positive for latent TB infection. Around 10 percent of those with LTBI will develop active TB at some point in their lives. The triggering mechanism to activate latent TB is not entirely understood, but high levels of stress, crowded living situations, poor public health practices, the presence of other diseases that lower the immune system, and behavioral conduct–such as smoking–appear to increase the chances of activation.

The 21.4 percent of refugees in the San Diego County study who tested positive for latent TB infection is about five times the national average.

Breitbart News contacted Starbucks to learn if their refugee hiring process will include mandatory testing for latent and active TB, but has not received a response.

The Starbucks refugee hiring event will be held at the San Diego offices of the International Rescue Committee, one of the top nine voluntary agencies (VOLAGS) that are paid over $1 billion each year to resettle refugees in the United States.

About 30 Starbucks managers will conduct on-the-spot interviews at the International Rescue Committee’s office located at 131 E. Main Street in El Cajon from 11 a.m. to 1:30 p.m. on Tuesday, Aug. 8. Applicants are encouraged to visit Starbucks online career center prior to the event and bring resumes along with them. The store managers will talk to the refugee applicants about what it’s like to work for Starbucks and review qualifications for the barista position.

The world’s largest coffee chain said it would focus initial efforts on markets where refugee need is greatest and there’s a store base to meet the need.

According to state and federal data, San Diego fits the bill.

No other California county has received more refugees during the past decade than San Diego county.

In 2016, San Diego settled 3,100 refugees, along with 520 military interpreters on special immigrant visas.

California, like most states, requires TB testing for health care workers. Employees of restaurants are not required by California law to be tested for TB prior to hiring.