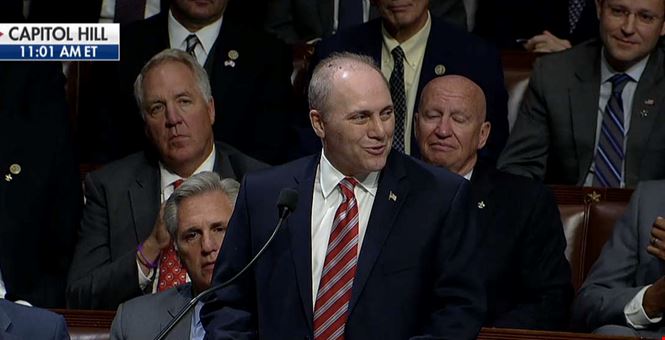 Welcomed by a roaring standing ovation Thursday morning, Congressman Steve Scalise walked onto the House floor for the first time since being shot during congressional baseball practice in June.

“Our prayers have been answered,” Speaker Paul Ryan said.  “His bravery and his family’s strength have been an inspiration to this House and this country…America is grateful for this moment.”

Aided by a set of crutches, Scalise made his way to the center of the chamber, receiving hugs and high fives along the way, to tell his story.

“It starts with God,” Scalise said. “When I was laying out on the ball field, the first thing I did when I was down and couldn’t move anymore, was pray. It gave me an unbelievable sense of calm.”

“The power of prayer is just not something you can underestimate,” he continued. “I am a living example that miracles do happen.”

Scalise thanked “true angels” who helped save him and his colleagues that day, starting with the Capitol Police and ending with his wife wife Jennifer. He thanked the medical teams who treated him and specifically praised Congressman Mo Brooks for his quick action of applying a tourniquet before the ambulance arrived.

“I want to specifically mention [Capitol Police Officers] Crystal Griner and David Bailey,” Scalise said, describing how he prayed for the officers to successfully carry out their duties against his attacker that day. “Crystal couldn’t be with us today, but David is here. David  you are my hero, you saved my life, thank you so much.”

“Above all else, I want to thank my lovely wife Jennifer,” he continued. “Those of you who know her, know how strong Jennifer is…through all the surgeries and late nights she held our family together.”

Scalise urged members of Congress to treat each other respect and thanked Republicans, Democrats and world leaders for their support .

“While some people might focus on…an evil act, I only remember thousands of acts of kindness,” Scalise. “God bless each and every one of you and God bless the United States of America.”