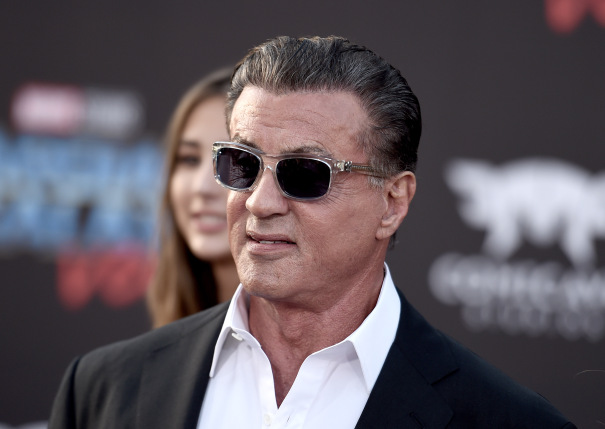 The Rocky actor was 40 years old when an unnamed teenager disclosed to Las Vegas police that she had been ‘intimidated’ into having sex with him and his bodyguard Michael ‘Mike’ De Luca at the former Las Vegas Hilton hotel in July 1986.

The 16-year-old claimed she had sex with Stallone and he encouraged De Luca to join them. At that point she became ‘very uncomfortable’ with the encounter but felt she had ‘no choice’.

De Luca then forced the teenager to perform oral sex on him before penetrating her, while Stallone made her give him oral sex, according to the police report.

Even if this was “consensual” which it doesn’t appear to be, it’s still statutory rape, and that’s rape y’all. The Las Vegas police confirmed that this report was filed, but the victim backed off from pursuing charges because she was reasonably terrified.

After the incident, the teen claims Stallone threatened her – she couldn’t tell anyone because both men were married and if she said anything, “they would have to beat her head in,” before laughing with De Luca.

The unidentified teen ultimately decided not to pursue charges against either men because she was “humiliated and ashamed,” as well as being “scared,” according to the police report.

The Daily Mail reached out to Stallone for his take and got this statement from his people:

“This is a ridiculous, categorically false story. No one was ever aware of this story until it was published today, including Mr. Stallone. At no time was Mr. Stallone ever contacted by any authorities or anyone else regarding this matter,” said spokesperson Michelle Bega.

And by the way, this is some pretty sick shit:

That night, the teen claims she went up to the 27th floor where she met Stallone and De Luca in the hallway and together, they all went into the hotel suite.

From there, the teen said she and Stallone went into the bedroom, got undressed and began having intercourse, while De Luca stayed in the bathroom.

The teen told police that they ‘really didn’t have sex’ because Stallone only inserted himself ‘a little ways’ into her and ‘only kept it in for a few seconds’.

Stallone remarked to the girl that she was ‘very tight’ before asking her if she ever had sex with two men at the same time, according to the report.

She said she responded that she hadn’t and then Stallone went into the bathroom and brought De Luca into the bedroom.

Stallone allegedly asked De Luca if he wanted a ‘blow job’ from the teen and De Luca then ‘forced her head down onto his penis’, according to the police report.

The minor claims De Luca forced her to perform oral sex on him for a few minutes before he ‘came around and had vaginal sex with her’.

Then Stallone allegedly ‘came over to her and pushed her head down onto his penis and made her give him a blow job’.

Neither of the men climaxed but the teen said that Stallone asked her if she ‘wanted to see come’ and then he ejaculated in front of her, the report continued.

Not only does he have a speech impediment, he has a morality impediment. What a scumbag, and yes, I believe this happened. Considering Stallone’s hypocritical stance on gun ownership (he’s against it) it wouldn’t surprise me if he’s done charity work for an anti-child sex exploitation group.

At this point I think all of Hollywood needs to register as a sex offender. Come to think of it, the same could be said about the Democratic Party. Is it just a coincidence that all these liberals are disgusting perverts and sexual predators?