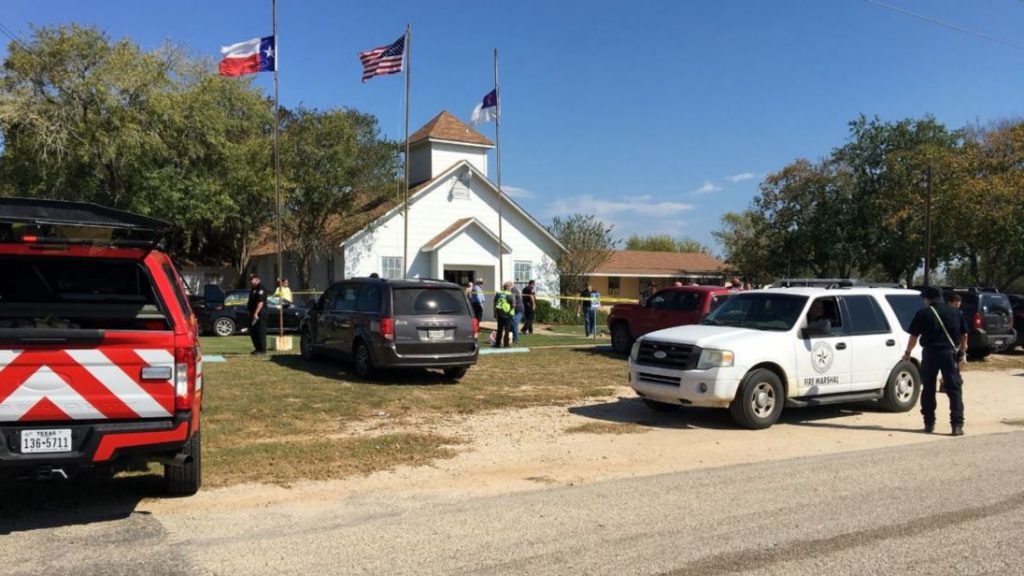 A church shooting in Sutherland Texas was stopped after a local gun owner grabbed his rifle and began returning fire at the shooter, police announced Sunday.

Police say the shooter, who has been identified as 26-year-old Devin P. Kelley of New Braunfels, Texas, walked inside the church and opened fire just before 11:30 a.m. local time. Kelly killed at least 26 people before an unidentified gun owner forced him to flee by grabbing his own rifle and returning fire, Texas Rangers announced Sunday.

“At approximately 11:20 this morning a suspect was seen at a Valero gas station in Sutherland Springs, Texas,” Police Maj. Freeman Martin told reporters. “He was dressed in all black. That suspect crossed the street to the church, exited his vehicle and began firing at the church.”

“Our local citizen pursued the suspect at that time,” Freeman said. “A short time later law enforcement responded that [the] suspect [was] right at the Wilson/Guadalupe County line … and was found deceased in his vehicle. At this time we don’t know if it was a self-inflicted gunshot wound or if he was shot by the local resident. We know he’s deceased in the vehicle. ”

Texas Gov. Greg Abbott, a Republican, confirmed that 26 people were killed and as many as 30 other wounded in the shooting. The death toll makes the attack the deadliest shooting at a place of worship in American history.

“We all know what happened here today. It’s something we all say does not happen in small communities,” Wilson County Sheriff Joe Tackitt said at a Sunday evening press conference. “Today we found out that it does.”

The victims ranged from five to 72 years old, officials said. First responders found 23 dead bodies inside the church, two more outside, and one person who was transported to a hospital but later died.