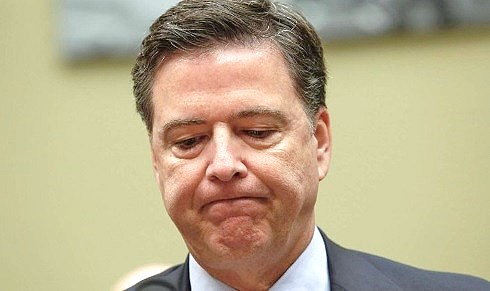 The chairman of the House National Security Subcommittee is calling on the Department of Justice to launch a formal investigation into former FBI Director James Comey’s alleged leak of classified information, according to an exclusive interview with the Washington Free Beacon in which the lawmaker also called on the Trump administration to purge all former Obama administration holdovers from government.

Rep. Ron DeSantis (R., Fla.), a member of the House Committee on Oversight and Government Reform and chair of its National Security subcommittee, is urging Attorney General Jeff Sessions to launch a full scale investigation into Comey’s handling of a series of potentially classified memos that were leaked to the press earlier this year.

DeSantis named Ben Rhodes—the former National Security Council official responsible for creating an in-house “echo chamber” meant to mislead reporters and the public about the landmark nuclear deal with Iran—as a primary source of these leaks and urged the House Intelligence Committee to call Rhodes and other former Obama officials to testify publicly about any role they may be playing in spreading classified information to reporters.

Comey’s behavior warrants a DOJ investigation due to the former FBI director’s admittance that he disclosed private information to the public in order to damage the Trump administration, according to DeSantis.

“Congress needs to press Sessions and other people to make sure they are investigating this because the American people need the truth,” DeSantis told the Free Beacon in a wide-ranging interview. “If he did violate any laws, he needs to be held accountable. If you’re violating laws in service of doing political warfare, that is just absolutely unacceptable, particularly for someone who held such a high position in the government.”

Comey has gone on record stating that he “leaked in order to trigger a special counsel, which in some ways is pretty extraordinary,” DeSantis noted.

“Not only is he leaking this stuff, not only were the memos done in the course of his employment and likely government property, he may have disclosed classified information in this quest to basically wage a vendetta against the president because the president fired him and to try and create a special counsel,” DeSantis said.

“This guy is really a creature of the swamp. He maneuvers around D.C. in ways that are very similar to how D.C. insiders operate,” DeSantis said of Comey. “He’s one of the best in those regards.”

DeSantis and other lawmakers are now seeking copies of Comey’s complete memos in order to review whether classified information may have been leaked to the press in violation of U.S. law.

“Comey has made a concerted effort to not disclose these memos,” DeSantis revealed. “I think Congress obviously has a right to get them.”

DeSantis is pushing his colleagues on the House Oversight Committee to subpoena Comey in order to obtain the memos.

The Free Beacon reported last week that leaks of classified information have reached an unprecedented level under Trump, with at least one leak a day targeting the current administration.

“This is not just standard Washington fair,” DeSantis said. “It’s happening on such a scale with this president that it’s much different.”

“Really, it has a whiff of people inside the bureaucracy who do not accept the election results, so they’re rebelling against the elected president by leaking and doing things to damage him politically,” the lawmaker explained. “It’s unprecedented, certainly in modern American history. The way you stop the leaks is if people are leaking info that is classified, and that’s a crime, DOJ has got to pursue that.”

The ongoing leaks also are likely to spur Congress to revoke multiple laws that have authorized the federal government to conduct spy operations and surveillance on the American public, including laws governing the U.S. Foreign Intelligence Surveillance Court, or FISA, which authorizes American surveillance operations.

“If the bureaucracy is going to weaponize this stuff, I think Congress is going to be much less willing to give them the authority to do this,” DeSantis said. “It is a big deal, and if no one is held accountable it’s going to continue to happen.”

DeSantis also expressed confusion at the Trump administration’s continued unwillingness to fire Obama administration holdovers and fill the government with officials who are more willing to implement the White House’s vision.

“Any Obama holdover at any of these agencies, you’ve got to get them out of there because clearly they’re not on the same team and particularly on the [White House] National Security Council,” DeSantis said.

Former senior Obama administration officials who have been tied to these leaks should be brought before Congress and questioned about their actions, DeSantis said.

“I think Congress and some members on the Intelligence Committee can call Ben Rhodes to testify,” DeSantis said. “He may be able to invoke executive privilege from when Obama was president, but he definitely can’t do that in any interactions he’s had since then.”

DeSantis identified Rhodes and other senior Obama administration officials as being “involved with feeding journalists some of these [leaks]. I believe he’s in touch with people on the National Security Council. It would be absolutely legitimate as part of leak investigation to bring him in and put him under oath, and I would absolutely support doing that.”

DeSantis also chided the press—particularly the New York Times and Washington Post, which have received a majority of the leaks—for continuously relying on anonymous sources, such as former Obama administration officials.

“The press has helped facilitate this breakdown,” he said. “They run stories that say former officials say, and basically that means Obama people are saying it. A lot of times these are people who are not even in the government anymore and the media will take stuff and run with it and a lot of times it’s not fully the truth.”

“In the zeal to get Trump on something, they rely almost entirely on people that aren’t willing to raise their hand and testify under oath or name themselves,” DeSantis said, adding that, “Republicans don’t trust any of these newspapers.”