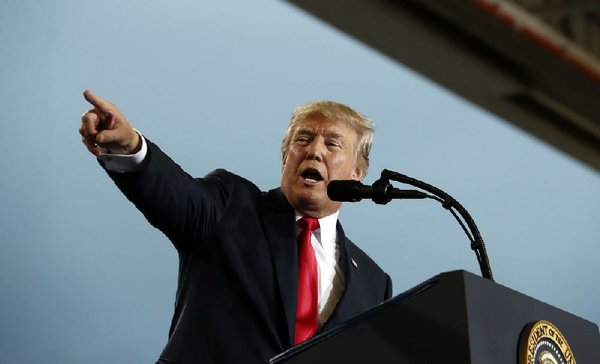 (CNSNews.com) – President Donald Trump said Wednesday that his administration is removing barriers that have slowed down American truckers, including eliminating regulations that “drive up the cost of energy.”

“When your trucks are moving, America is growing. Do you agree? That is why my administration has taken historic steps to remove the barriers that have slowed you down. America first means putting American truckers first,” Trump told a crowd at a rally in Harrisburg, Pa.

“That includes eliminating the regulations that drive up the cost of energy. We want low-cost fuel for our truckers and for our families all across this country,” the president said.

To this end, he’s ordered every federal agency to review and remove job-killing regulations that “hamstring” companies and undermine their ability to compete.

“My administration is also committed to passing a historic infrastructure package that will generate $1 trillion to rebuild America’s crumbling infrastructure with a special focus on roadways and highways,” the president said.

“It is time to take care of our country, to rebuild our communities, and to protect our great American workers. It’s about time,” Trump said. “And already, we are seeing the incredible results – results that, in many cases, the media hates to report, but I’ll report them tonight for you.”

He ticked off a list of accomplishments, including record low unemployment, rising wages, a soaring stock market, and increasing the country’s economic worth.

“Unemployment is at a 16-year low. Wages are rising — and you know you haven’t heard that in a long time. The stock market is soaring to record levels, boosting pensions and retirement accounts for hardworking Americans. Their values are going up every single day,” he said. “And very proudly, just in the stock market alone, we have increased our economic worth by $5.2 trillion dollars. That’s right since Election Day — $5.2 trillion. Think about that. That’s a quarter of the $20 trillion that we owe.

“So we’ve already — but listen to this because we’ve doubled — in the last eight years of the previous administration, the debt doubled, so that in eight years our debt — literally hundreds of years of debt — doubled in eight years to $20 trillion,” he said. “But since the election on November 8th, I’ve increased the value of your U.S. assets by more than the $20 trillion that we currently owe. You haven’t heard those numbers.

“GDP growth reached more than 3.1 percent last quarter — way ahead of schedule. We weren’t supposed to hit that number for a long time. Not for a long time. And I will tell you, I think this quarter would have even been better, but we did get hit with some very, very powerful hurricanes, but it’s still going to be very good,” he said. “Manufacturing confidence is at an all-time high, which is great news for those who ship products to the marketplace. The confidence in our country is back like it hasn’t been in many, many years.

“The fact is, America is finally back on the right track, but our country, and our economy, cannot take off like they should unless we transform America’s outdated, complex, and extremely burdensome tax code,” the president said. “And that’s why I’m here with you right now, tonight.

“And we’re going to fight, and we’re going to get those Republicans and maybe of few of those Democrats to raise their hand. and you’re going to have so much money to spend in this wonderful country and this great economy,” Trump added.