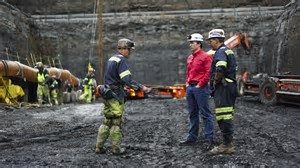 A new coal mine touted by President Trump held its grand opening Thursday in southwestern Pennsylvania.

Trump, who mentioned the mine last week in a speech announcing his withdrawal from the Paris climate change agreement, recorded a video message for the opening ceremony for Corsa Coal Corporation’s Acosta Mine in Somerset County.

“I’m absolutely thrilled to be speaking with you on this great, great day. The miners of Pennsylvania are mining coal again,” Trump said in the video shown at the event with miners, executives and dignitaries, according to the Tribune-Review.

“Washington may be 180 miles down the road, but I want you to know each and every day, I’m fighting for you and all the forgotten men and women of America,” he said.

The mine will produce approximately 400,000 tons of coal annually for about 15 years and employ between 70 and 100 people. The coal is metallurgical, meant to be burned for production of steel and other metals.

To Trump, the Acosta mine shows that his energy policies – mainly rolling back former President Barack Obama’s environmental rules – are helping bring coal back in a big way. He had promised this on the campaign trail, and won areas in Pennsylvania’s coal country by wide margins over Democratic nominee Hillary Clinton.

“We’re having a big opening in two weeks … a big opening of a brand-new mine,” Trump said at the White House event announcing his Paris decision last week.

“It’s unheard of. For many, many years, that hasn’t happened.”
But Corsa, which started work on the mine last August, before the election, and was planning it for years, is responding to a recent uptick in the demand for metallurgical coal.

Demand for thermal coal for electricity generation is trending downward. Coal-fired power plants are continuing to close due to competition from cheap natural gas and environmental rules, and utilities are not planning to open many new plants.

Corsa invited Trump to attend the opening, but he ended up recording the message instead.

Pennsylvania Gov. Tom Wolf (D), who supports the Paris accord, also participated in the event. The state provided a $3 million grant for the mine, which helped offset the $15 million or so initial investment, the Tribune-Review said.

(First reported by The Hill and retrieved from MSN) http://www.msn.com/en-us/news/politics/trump-celebrates-coal-mine-opening-in-pennsylvania/ar-BBCjXi9?li=AA5a8k&ocid=spartanntp