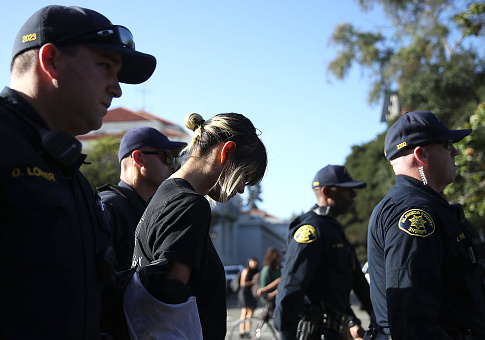 A student group at the University North Carolina Asheville (UNCA) has demanded that campus police immediately disarm, and that funds invested in purchasing weapons be reallocated for student mental health services.

The Student Action Coalition held a rally on campus Oct. 16 to make their stipulations known.

“If demands are not met, and negotiations are not made, next steps will be taken,” they said.

“UNCA reinvest weapons money into health and counseling to provide students with more than 10 sessions a semester and more experienced and licensed therapists,” the coalition said.

They also want to see mandatory “de-escalation training for the entire campus including campus police.”

UNCA Police Chief Eric Boyce has said the force has not purchased new weapons in about four years, and “disarming” the officers would free up a meager $3,000, school paper the Blue Banner reported.

Coalition members have speculated that officers may not even be allowed to fire the weapons they carry, Blue Banner reported, but Boyce clarified that campus police do have statutory authority to use deadly force should the circumstances demand it.

“The first level of force is presence. Just your presence should deter anyone from using force. The second level of force going up that continuum is verbal. So we show up and that doesn’t help the problem, then we ask folks to comply. Voluntary compliance is always our preferred method of enforcement,” Boyce said.

“We arm our officers with a variety of different tools and techniques that they can deploy to prevent them from automatically going from presence to the use of deadly force,” he told the Blue Banner.

The student coalition has created a “facts”-sheet to promote their cause, which includes claims like, “931 people have been murdered by police in 2017 so far.”

According to a Washington Post national database, 813 people have been shot and killed by police this year.

The creator of the coalition—which describes itself as a group of students and community members “mobilizing to bring social justice and equality” to UNCA — received one of the school’s most prestigious student awards in April 2017. JaNesha Slaughter was recognized for her “outstanding service to the community” with the William and Ida Friday Award, named for a former president of the university.

The coalition’s demands come in response to the fatal shooting of Georgia Tech student Scout Schultz by campus police last month. Schultz was shot after advancing on officers with a knife while shouting, “Shoot me!” and ignoring repeated calls to drop the weapon. A lawyer for Schultz’s parents theorized that the student had suffered a mental breakdown.

The students will be meeting with administrators next week, according to the Blue Banner.