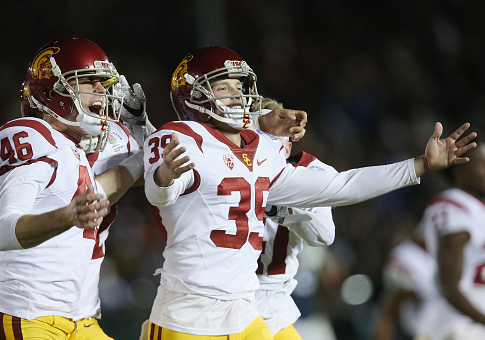 The University of Southern California suspended a student for an “assault” that the alleged victim is adamant never occurred.

Matt Boermeester, a kicker on the Trojan football team, was suspended in February for an undisclosed “student code of conduct issue.” When training camp began Saturday, he was no longer listed on the official team roster.

But on Sunday, Boermeester’s girlfriend went to the press to explain his absence. Zoe Katz emailed a statement to the Los Angeles Times, stating that her boyfriend “has been falsely accused of conduct involving me.”

Katz claims that she and Boermeester were roughhousing and playing around, when they were spotted by a neighbor. The neighbor believed it was an assault and told his roommate, who told a USC coach, who brought the incident to the attention of the Title IX office.

Katz told the investigators that nothing had happened, but administrators did not believe her.

“When I told the truth about Matt, in repeated interrogations, I was stereotyped and was told I must be a ‘battered’ woman, and that made me feel demeaned and absurdly profiled,” she said in a statement. “I understand that domestic violence is a terrible problem, but in no way does that apply to Matt and me.”

Despite the purported victim denying there had been an assault and despite no criminal charges being filed, Boermeester was suspended and forbidden from stepping foot on campus. The school even barred the couple from contacting each other.

“Matt Boermeester did nothing improper against me, ever,” Katz said. “I would not stand for it. Nor will I stand for watching him be maligned and lied about.”

The case comes after a Colorado State University-Pueblo football player was expelled in 2016 for the sexual assault of a female trainer, even though both parties maintained that the sex was consensual.