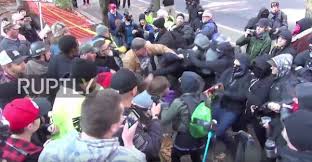 Portland, Oregon based Patriot Prayer attempted to hold a rally and march in honor of Kate Steinle on Saturday.

And of course Antifa Communists just had to show up to cause trouble.

Patriot Prayer is led by Joey Gibson, and generally regarded as the area’s main collection of Trump supporters. Two brawls break out and antifa basically get their butts handed to them as they try to pick fights.

Note the guy in the blue Navy hoodie, single handedly taking on about 8 antifa agitators. Also note the police rush in to break it up after about 30 seconds, when it’s clear the Trump people are winning.