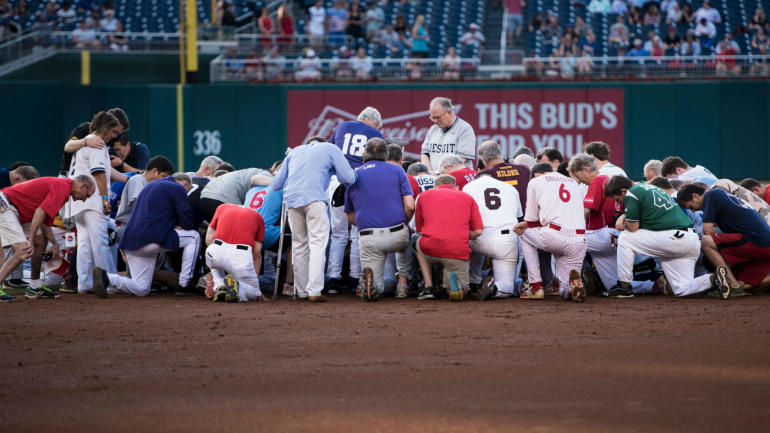 President Donald Trump sent a video message to members of Congress participating in the annual Congressional Baseball Game after a gunman targeted Republicans at practice on Wednesday.

“As you all know tonight’s game has taken on a much deeper level of meaning, beyond anything that we would have thought,” Trump said in the video. “By playing tonight, you are showing the world that we will not be intimidated by threats, acts of violence, or assaults on our democracy.”

Trump hailed the game as a time to celebrate friendships and the national pastime of baseball. All proceeds from the game go to charity.

He paid special tribute to wounded House Majority Whip Steve Scalise, who was shot by the gunman and remains in the hospital in critical condition.

“I know you all will be playing extra hard tonight for Steve,” he said.

He also recognized the other four people wounded in the attack — two capitol police officers, a congressional staffer, and a lobbyist.

Trump also made a plea for unity in Washington despite a year fraught with disagreement between the two parties.

He concluded with a tribute to the game of baseball.

“I leave you with three great American words that for generations have torn down barriers, built bridges of unity and defied those who have sought to pull us apart,” he said. “Ladies and gentlemen, let’s play ball!”