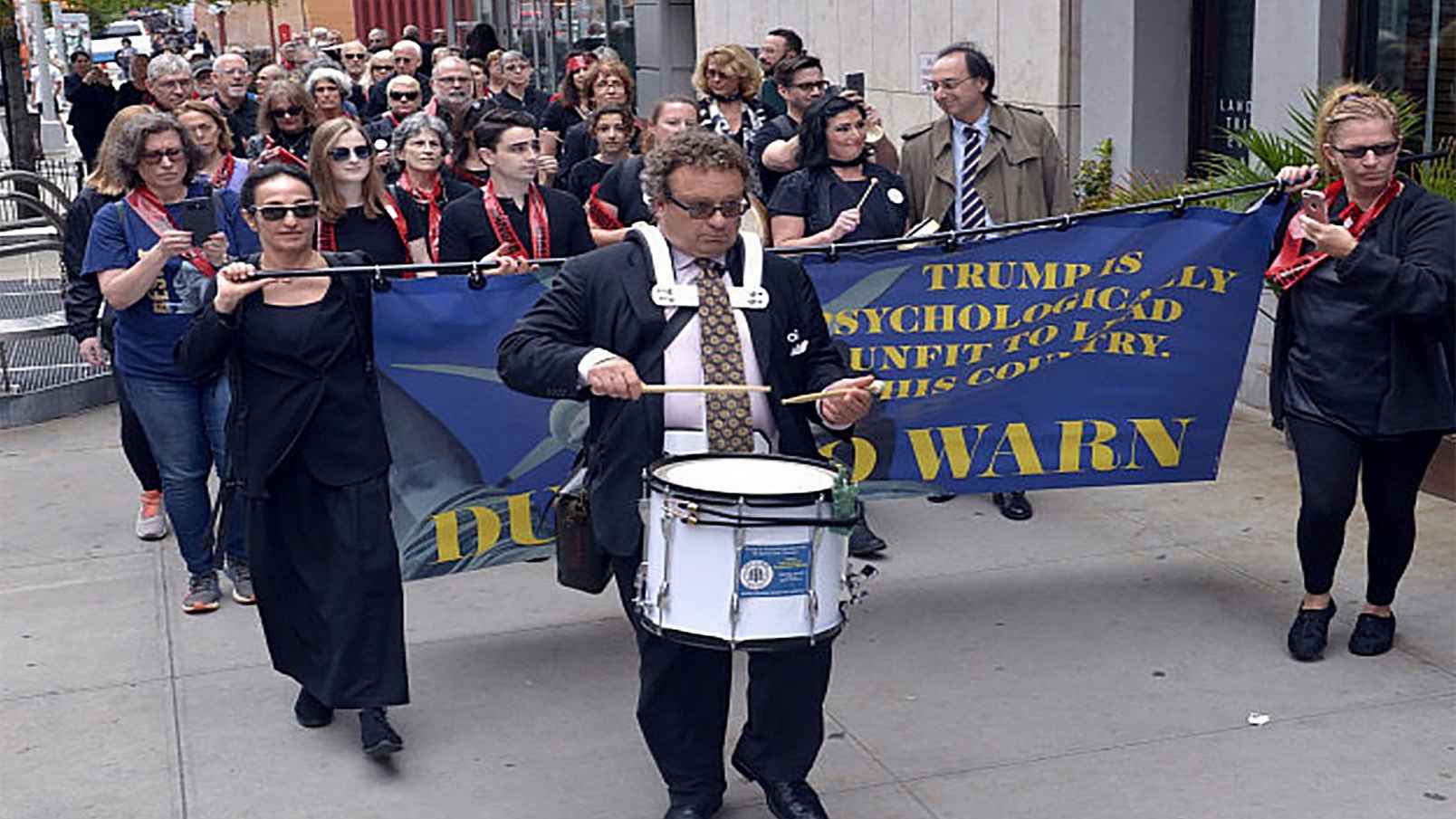 Lefty shrinks and Hawaiian gods are angry at Trump.

In October, 125 psychologists and assorted mental health professionals marched to New York’s City Hall while wearing red tags warning, “DANGER.” Leading the march was Peter Fraenkel, author of Sync Your Relationship, Save Your Marriage, mournfully beating a drum in a solemn march. Fraenkel, a psychologist and “professional drummer” was able to combine his love of drums and hatred of Trump.

The ‘Duty to Warn’ march had begun at New York Law School where the experts demanded that Trump be removed from office based on their inability to understand the 25th Amendment. And then the mental health experts marched to the beat of Fraenkel’s drum in what they insisted was a “funereal and dignified” procession.

“Please wear professional attire or dark clothing,” the mental health experts were instructed. “There will be a slow drum beat, ‘DANGER’ tape, and flashing warning lights.”

The paperwork urged, “Bring a drum if you have one” and, “come as your solemn, concerned self.”

If only the organizers had put a fraction of their obsessive delusions into actually trying to justify the claim on their shiny blue banner that, “Trump is psychologically unfit to lead this country.”

There were no drums when Bandy X. Lee, the organizer of Yale’s ‘Duty to Warn’ conference showed up on Capitol Hill to “brief” Dem politicians about Trump’s mental illness that she diagnosed over Twitter. Lee, a self-proclaimed expert on the prison system, apparently isn’t even currently licensed to practice.

But on Twitter, Bandy X. Lee explained that she had been “licensed on two continents,” has “excellent credentials,” a “flawless ethics history” and speaks “four languages.” On Vox, Lee claimed that Trump’s recognition of Jerusalem was a “pathological” example of him “resorting to violence”.  Then she blamed him for “an increase in schoolyard bullying.” Appearing on MSNBC, she warned that Trump “could be the end of humankind.”

All this craziness didn’t stop Rep. Rosa DeLauro and Rep. Jamie Raskin from inviting her for briefings.

Around the same time that Fraenkel was beating his drum in Manhattan, The Dangerous Case of Donald Trump was released by Macmillan. The book contained unsolicited accusations and diagnoses from “27 psychiatrists and mental health experts”. It was edited by Bandy X. Lee.

Contributors included Tony Schwartz, a former New York Times reporter who had worked on the Art of the Deal with Trump. His mental health qualifications are unclear.  Also included is Gail Sheehy, a former New York Magazine writer, who had written a Hillary biography. The epilogue features Noam Chomsky, whom Lee describes as a “linguist and philosopher-historian”. Not to mention leftist genocide denier.

In The Dangerous Case of Donald Trump, Tony Schwartz diagnoses Trump with a risky “sense of self-worth”. Gail Sheehy accuses him of “narcissism and paranoia” and a “trust deficit.”