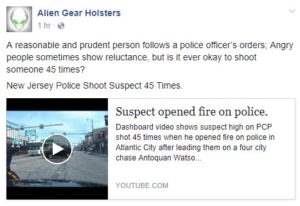 The holster company took to their Facebook page this morning to sound off on the officer-involved shooting of Antoquan Watson, criticizing their use of force.

Watson, who was high on PCP, had opened fire on officers during a vehicle pursuit, even exited his vehicle to take aim at officers as he continued to fire at law enforcement.

Alien Gear obviously has a problem with the officers returning fire to stop Watson’s assault. Their FB post reads:

“A reasonable and prudent person follows a police officer’s orders; Angry people sometimes show reluctance, but is it ever okay to shoot someone 45 times?”

After getting hammered with criticism for almost 2 hours from pissed-off customers, Alien Gear Holsters deleted their comment and replaced it with a meme with no further comment, as if they are trying to pretend that their previous comment never happened: 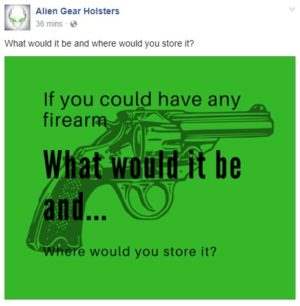 The shooting initially occurred in March 2014 after police received a report that Watson had a gun inside of Pleasantville’s La Esconda II Restaurant, according to NJ.com.

According to a waitress, Watson bought two beers and appeared to be drunk and mumbling to himself and multiple people called to report seeing him holding his gun in his right hand, pointing it at the ceiling.

Officers responded and attempted to talk to Watson while he was in his vehicle, but he refused to roll down the window.

Watson then took off in his vehicle, leading police on a high-speed pursuit, running red lights and driving up to 85 MPH. He then started firing shots at officers while he fled.

Finally, another vehicle struck Watson’s car after he ran a red light, causing the vehicle to spin out and stall.

Watson then exited his vehicle and opened fire on officers.

Officers returned fire and were shocked when he appeared unaffected by the bullets and, assuming he was wearing body armor, it appears that at least one officer may have been shooting for his legs.

Once Watson was on the ground, you can see him still moving while he still had the gun in his hand, and officers continued to fire until he stopped lifting the gun.

An autopsy found that Watson was high on PCP.

Criticizing officers for repeatedly shooting a man who was actively trying to murder them, while on PCP and unaffected by bullets, shows a complete lack of knowledge of gunfights. That’s not something we would expect from a holster company.

Considering that Alien Gear Holsters is critical of officers who were defending their lives during a gunfight, and the company’s apparent a lack of reasonableness, I can think of better holsters to spend my money on.

Let’s spread the word that we expect better from companies who want our business.

I’ll side with Blue Lives Matter on this one. It appears Alien Gear has little respect for the Thin Blue Line those in law enforcement walk each and every day on the job.

Watch the dashcam video and let us know what you think!

Blue Lives Matter reached out to Alien Gear Holsters to clear up what they meant by their post on Facebook.

They responded by blocking them. 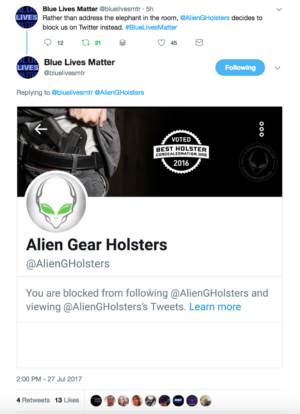 Alien Gear has posted an apology across all social media platforms: 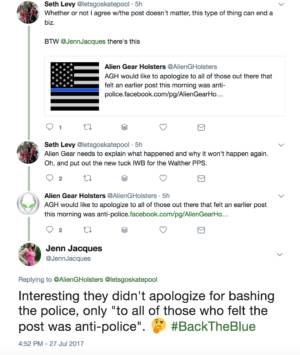 …but when people went after them for the non-apology, they tried again – this time, the CEO himself threw some girl under the bus to try to save face: 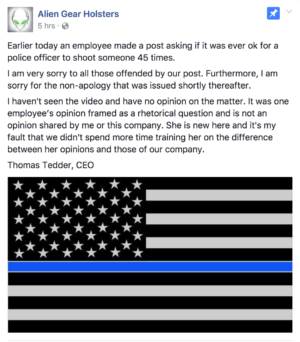 Too little, too late?

I’ll be honest – I’ve never liked their products, even more so after this, but instead of giving them any more press, I’ll just use this as an opportunity to say how much I love CrossBreed & Raw Dog holsters, and UnderTech UnderCover gear.

Carry on and carry often, everyone!

I, for one, can personally appreciate what appears to be a genuine apology. Alien Gear Holsters has now unblocked Blue Lives Matter (but didn’t tell us as far as I can see.)

If this was a mistake by one lone employee, it certainly escalated with the poor response prior to the message from the CEO.

Unfortunately for them, it appears that they may have used the poor employee’s advice again when making the final update. The company edited their initial apology and replaced it with the message from the CEO, rather than making a new post, which is an awful idea because they left all of the criticism of the non-apology in place and failed to notify people on Facebook of an update.

I am personally not going to boycott Alien Gear Holsters, and I believe that they just have an employee who is incompetent at PR on social media. Blue Lives Matter has only ever called for one boycott, and that was for Ben & Jerry’s after they decided to take a company position against police.

How you spend your money if your choice, but you now have what appears to be a sincere apology from the CEO to consider.