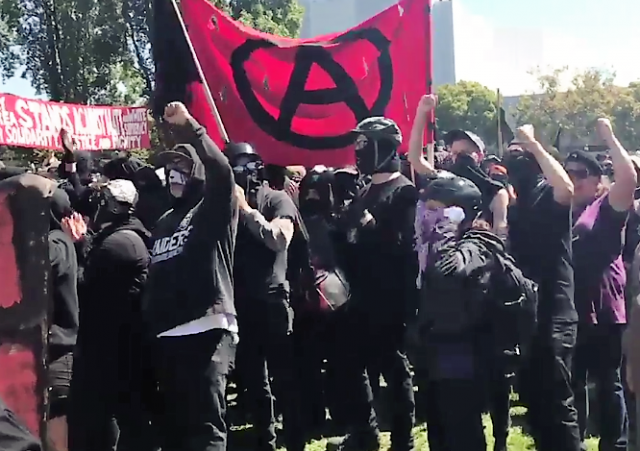 The counter-demonstration had reportedly been “largely peaceful” until that point.

The police later defended their decision by arguing that keeping the anarchists out would have led to greater violence. There was “no need for a confrontation over a grass patch,” Berkeley police chief Andrew Greenwood said, according to the San Jose Mercury News.

The original “No to Marxism” protest had been denied a permit by the city, but a small group of protesters showed up anyway, as did 2,000 “largely peaceful” counter-demonstrators, the Mercury News reported. SFGate.com reported that there were 400 police on hand to prevent violence. But they stepped aside, the Mercury News reported, when over 100 masked anarchists “busted through police lines, avoiding security checks by officers to take away possible weapons.”

The result was several severe beatings of those who had gathered to protest against Marxism. Thirteen of the anarchists were arrested, the Chronicle reported.

The Los Angeles Times reported the violence as if it had simply been spontaneous, and involved both sides: “Violence breaks out at Berkeley protest,” its headline read.

But the Mercury News report, citing Berkeley law enforcement authorities directly, made it clear that police knew that “Antifa” intended to cause violence, and allowed it to happen:

Berkeley police chief Andrew Greenwood defended how police handled the protest, saying they made a strategic decision to let the anarchists enter to avoid more violence.

Greenwood said “the potential use of force became very problematic” given the thousands of peaceful protesters in the park. Once anarchists arrived, it was clear there would not be dueling protests between left and right so he ordered his officers out of the park and allowed the anarchists to march in.

The names of the 13 arrested were published by SFGate.com.

Gibson’s demonstration in San Francisco on Saturday was canceled amidst threats of violence and efforts by authorities to make it more difficult for Patriot Prayer to hold their event.