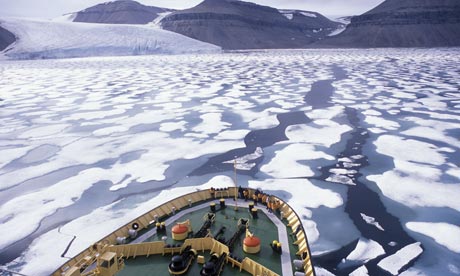 A global warming research study in Canada has been cancelled because of “unprecedented” thick summer ice.

Naturally, the scientist in charge has blamed it on ‘climate change.’

The study, entitled BaySys, is a $17-million four-year-long program headed by the University of Manitoba. It was planning to conduct the third leg of its research by sending 40 scientists from five Canadian universities out into the Bay on the Canadian Research Icebreaker CCGS Amundsen to study “contributions of climate change and regulation on the Hudson Bay system.”

But it had to be cancelled because the scientists’ icebreaker was required by the Canadian Coast Guard for a rather more urgent purpose – rescuing fishing boats and supply ships which had got stuck in the “unprecedented ice conditions”.

“It became clear to me very quickly that these weren’t just heavy ice conditions, these were unprecedented ice conditions,” Dr. David Barber, the lead scientist on the study, told VICE. “We were finding thick multi-year sea ice floes which on level ice were five metres thick… it was much, much thicker and much, much heavier than anything you would expect at that latitude and at that time of year.”

Clearly not one to let a crisis go to waste, Barber seized the opportunity to perform the usual alarmist clown dance for the media, explaining why this incident definitely shows that global warming is a major problem and deserving of our urgent attention.

“It was clear it was from the Arctic, I just needed to be among the ice to see it,” said Dr. Barber. “What was also clear to me was that climate change has caused this event to happen.”

[Don’t you just love that “I just needed to be among the ice”? I think what he’s trying in his subtle way to tell us is: “Not all superheroes wear capes”]

Warming to his theme, he told Global News:

“This is climate change fully in action – affecting our ability to make use of marine resources and transport things.”

“This is a wake-up call for all of us in the country.”

Of course it is. Now Barber has the perfect excuse to share his war stories with all the other global warming experts who have had their research expeditions/publicity stunts stymied by unseasonal bouts of global warming.

There was the Ship of Fools expedition in which an Australian climate researcher called Chris Turkey had to call an expedition to the melting Antarctic after his ship got stuck in the ice.

The Caitlin Expedition – supported by the Prince of Wales – in which Pen Haddow and his team had to abandon their trip to the North Pole because it was colder than they’d expected.

Most recently there was Ship of Fools II, in which a global warming research voyage by David Hempleman Adams had to be curtailed because of unexpected ice.

What on earth can Mother Gaia be trying to tell them?

Possibly the same message she’s trying to send out to the Greenies in California with this unexpected fall of white global warming.

A rare winter-like storm brought more snow to the Sierra Nevada on Monday, giving skiers the opportunity to enjoy the slopes as summer gets underway.

At Squaw Valley, the storm dropped four inches of snow at the upper elevations and two inches at the base, delighting skiers and snowboarders who will be on the slopes past the Fourth of July for a first time in history.

Apparently, she didn’t get the famous memo from the Independent a few years back.