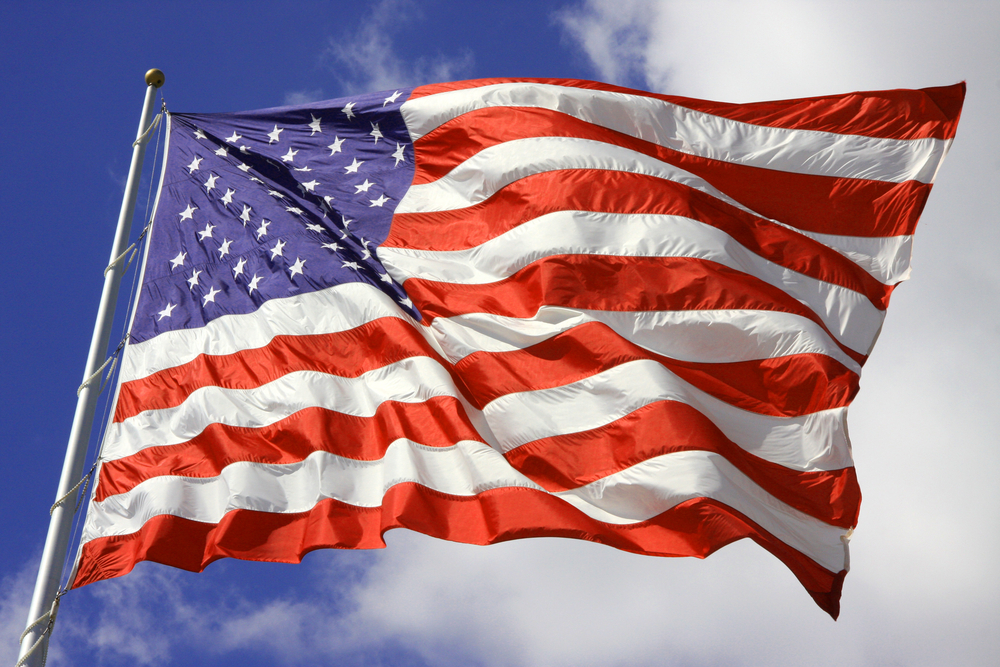 The Sportsman’s Shop, a small town business that has been in operation since 1954, says it can no longer advertise products like American flags or outdoor clothing on Facebook because its Facebook page promotes the sales of guns, and includes links that lead to the same.

Located in East Earl, Pa., part of Lancaster County, the store specializes in sport shooting, hunting, archery, fishing and other similar open-air activities. Like many businesses both big and small, The Sportsman’s Shop depends on digital advertising, particularly on social media platforms, to broadcast its offerings. It was for a long time permitted to use the full capabilities of Facebook’s marketing platform, until one day staff at the Pennsylvania store no longer saw one of their advertisements promoting the sale of American flags. 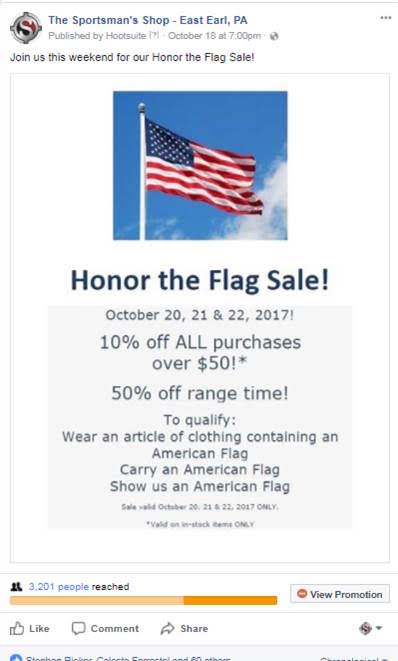 Perplexed by the disappearance of the ad, Jessica Keffer, the marketing manager at the Sportsman’s Shop, reached out to Facebook to see if an error or glitch had occurred.

“Facebook is a great tool. We have found it widely successful with our customers,” Keffer told The Daily Caller News Foundation, adding that’s why she was so anxious to find out what had happened.

After some allegedly insufficient responses from Facebook, Keffer said she later realized all of her advertisement capabilities that she was usually afforded were suddenly unavailable.

“This was very confusing and frustrating,” Keffer said. She contacted Facebook once again, but this time Facebook had an answer for Keffer.

A Facebook employee pointed her to the Prohibited Content section, that is part of its official Ad Policies.

“Ads must not promote the sale or use of weapons, ammunition, or explosives,” one of the subsections reads.

Enumerated examples of what’s acceptable include: language like “Gun exposition today!” or “blogs or groups connecting people with weapon-related interests, as long as the service doesn’t lead to the sale of these products.”

Posts with captions “Cheap firearms: Buy now!” and “weapons of any kind, including pepper spray, knives, tasers, or weapons intended for self-defense,” aren’t allowed, according to Facebook’s rules.

But the American flag sale promotion, which was purposefully removed, didn’t contain any such content; it’s a benign ad for a benign, patriotic product. And why would one post cost the shop all of its Facebook-granted ad functions?

Keffer said she was told it’s due to their Facebook page, which also incorporated a link to their own website, not the particular American flag advertisement.

TheDCNF corresponded with representatives at Facebook, who among other details, highlighted their “Ad Review Process.”

“During the ad review process, we’ll check your ad’s images, text, targeting, and positioning, in addition to the content on your ad’s landing page,” the subsection “What We Consider” reads. “Your ad may not be approved if the landing page content isn’t fully functional, doesn’t match the product/service promoted in your ad or doesn’t fully comply with our Advertising Policies.”

In other words, in addition to the publicly posted rules, Facebook told TheDCNF that it evaluates the Facebook page in question, as well as where that page can lead to with any embedded links. Due to the fact that The Sportsman’s Shop’s Facebook page — as well as its hyperlinked website embedded into that page — is filled with content promoting the sales of guns and showing in-house firearm training, the store could no longer advertise altogether.

“We are very frustrated with Facebook’s ad policies,” said Keffer. “Like any business, we want to grow our reach and attract new customers and when you are restricted from promoting your product on a very visible platform it is a huge disservice. Advertising is crucial to any business. Reaching new customers and attracting new clients is imperative to our success.”

Keffer’s statements are especially true given the fact that she is surrounded by competition, some being relatively massive corporations like Cabela’s and Dick’s Sporting Goods, that have locations not too far from The Sportsman’s Shop’s single spot.

“We are just the little guy,” Keffer explained. “At the end of the day, we are simply trying to promote our product and our industry and our lawful and ethical business is under a microscope because of Facebook’s political and cultural bias.”

Also, the power and effect behind Facebook’s advertising platform is obvious. Facebook, along with Google, dominates the digital ad revenue market, showing that publishers of content — from businesses to nonprofits to agencies — almost need those two tech companies for promotional purposes.

TheDCNF reached out to Cabela’s media relations office multiple times to see if they also have the same problem as The Sportsman’s Shop, but the company failed to respond. A relatively quick probe of Cabela’s Facebook page shows that it does not include firearms and other weaponry. The company even seems like it goes out of its way to only post content that is related to outdoor activities like hunting, without violating Facebook’s policies.

The company does have a link to its website on the Facebook page, that contains the sales of guns.

So, too, does Dick’s Sporting Good’s.

TheDCNF specifically inquired about these two retail corporations. Facebook implied that it allows stores to promote, for example, a backpack, if they link to a site (or that link leads to another site) that doesn’t have weapons immediately accessible.

A visit to Dick’s Sporting Good’s and Cabela’s main websites seems to show that both have firearms and similar products available for purchase deeper within, though still not that hard to find.

When asked if she think’s it would be a good choice to remove all the firearms posts on its Facebook page, and also restructure its website to not prominently feature guns, Keffer sternly said “No.”

“We find it troubling and irrational that Facebook would find as ‘inappropriate’ normal commercial speech by a federally licensed business engaged in the lawful commerce of advertising and selling hunting and sports shooting firearms which can only be sold to a law abiding citizen after a background check,” Lawrence G. Keane, senior vice president and general counsel of the National Shooting Sports Foundation, a trade association for the firearms and related industries, told TheDCNF. “Recently, the federal appellate court in San Francisco said the commercial sale and purchase of firearms is part and parcel of the right to keep and bear arms.”

Keffer says it’s especially disappointing because they actually train people to use firearms properly, so along with salesmen, they essentially are safety advocates.

Both Keffer and Keane argued that due to its enormous power, Facebook is now inherently “a virtual public square,” where freedom of speech should be expected, regardless of its clear classification as a private company.

“Facebook owes the public a higher duty not to discriminate against free speech especially when that censorship stifles the exercise of a fundamental protected right enshrined in the Constitution,” Keane continued.

Facebook has been accused of censorship many times before, as it constantly struggles to balance coinciding and opposing clamoring from all angles of society. Some worry that harassment and abuse has adulterated the platform and turned it into a vitriolic cesspool. Others say Facebook’s crusade to purge certain content and speech has unduly and unjustly led to the compromise of its free expression ethos.

In an exclusive story from TheDCNF, the Libertarian nonprofit The Atlas Society says its page on Instagram (which is owned by Facebook) was taken down with little to no explanation in an apparent act of censorship. Instagram refutes that it took down the account itself.

And there are more cases.

The Swedish Cancer Society was forced to change an instructional breast examination video by making the animated boobs square-shaped after Facebook censored its content.

Facebook apologized for the removal, saying “Its team processes millions of advertising images each week, and in some instances we incorrectly prohibit ads.”

“This image does not violate our ad policies. We apologize for the error and have let the advertiser know we are approving their ads,” Facebook told The Guardian.

And there is the infamous alleged suppression of stories more likely to be interesting to conservative readers from a damning Gizmodo report in 2016. Positive liberal stories were subsequently bumped up higher from the partisan prioritizing.

“We take allegations of bias very seriously,” a Facebook spokesperson told TheDCNF at the time. “Facebook is a platform for people and perspectives from across the political spectrum.” (RELATED: Facebook Apologizes For Banning Tribute To Tiananmen Massacre)

In spite of Facebook’s contentions, Keffer thinks her particular business is being singled out, while Keane says the larger industry has had problems with what they both see as partial policies from Facebook.

“To restrict a business who is both operating legally and ethically just shows the tremendous bias,” said Keffer.

“We would welcome a dialogue with Facebook concerning its discrimination and censorship our industry,” said Keane. “But if Facebook will not rescind this troubling practice, then perhaps Congress should regulate social media platforms that discriminate as they would any other business that discriminates.”

Bipartisan suggestions for government regulation over companies like Facebook have been steadily growing. And regardless if that contentious argument is justifiable, palatable or doable, The Sportsman’s Shop may serve as more ammunition for certain protesters calling for bureaucratic oversight.