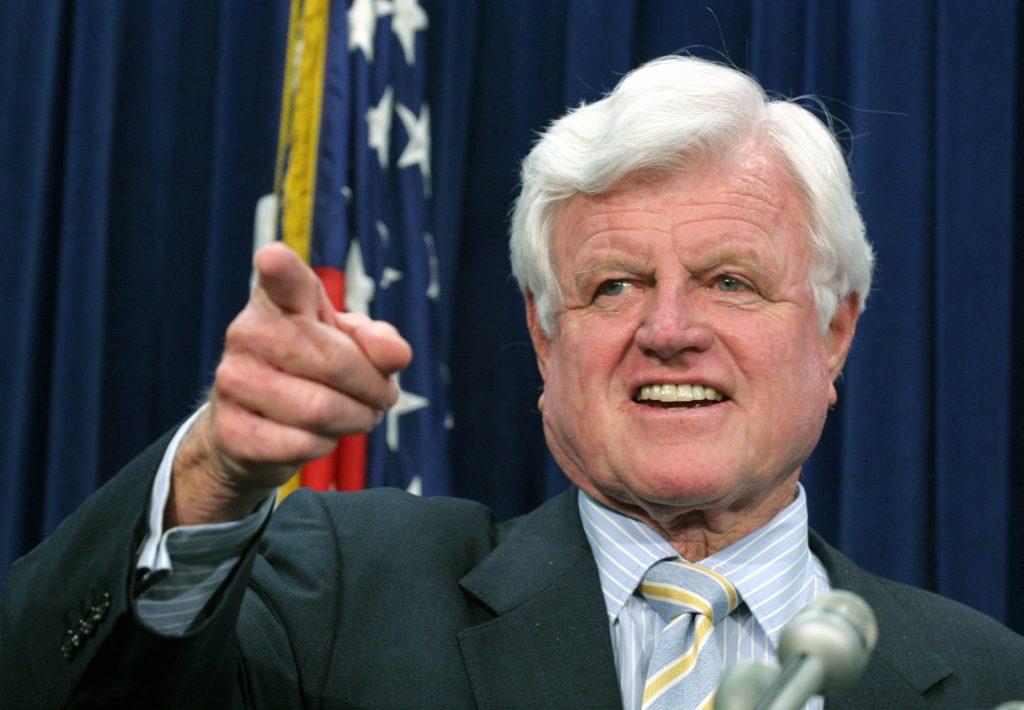 The open acceptance by the media of sexual harassment of women by famous Democrats preceded their tolerance of sexual misconduct by the notorious Bill Clinton. No better case of the media sniggering over Democrats’ mistreatment of women can be found than the 1990 profile by GQ of that noted paragon of morality, Ted Kennedy.

What is truly astonishing is that as late as April 2016, GQ revived that salacious 1990 piece, called “Ted Kennedy on the Rocks,” with this approving headline: “FROM THE GQ ARCHIVES: The once-strong voice of liberalism is now slurred, but the bibulous Kennedy boyo remains the life of the party.”

Life of the party, indeed. The 1990 portrait gushed:

For his hard public drinking, his obsessive public womanizing and his frequent boorishness, he has become a late-century legend, Teddy the Terrible, the Kennedy Untrammeled. In Washington, it sometimes seems as if everyone knows someone who has slept with Kennedy, been invited to sleep with Kennedy, seen Kennedy drunk, been insulted by Kennedy.

The stories of Kennedy’s sexual harassment were profuse. For example, this, from the article:

In a downtown office, a former congressional page tells of her surprise meeting with Kennedy three years ago. She was 16 then. It was evening and she and her 16-year-old page, an attractive blonde, were walking down the Capitol steps on their way home from work when Kennedy’s limo pulled up and the senator opened the door. In the backseat stood a bottle of wine on ice. Leaning his graying head out the door, the senator popped the question: Would one of the girls care to join him for dinner? No. How about the other?

Har-de-har-har-har. Right, GQ? After all, as the article noted, “Perhaps this seems unfair. From all available evidence, God created our elected officials to drink and screw around.”

Oh, but there was more, of course, including the infamous incident in 1985 in which the six-foot-two, 225-plus-pound Kennedy allegedly grabbed five-foot-three, 103-pound Brasserie waitress Carla Gaviglio, threw her on a table, then reportedly picked her up and threw her on Sen. Christopher Dodd of Connecticut, who was sprawled in a chair. Then Kennedy allegedly jumped on top of her and began rubbing his genital area against hers. GQ wrote, “Bruised, shaken and angry over what she considered a sexual assault, Gaviglio runs from the room.”

What she considered a sexual assault?

During his twenty-two-year marriage, his extramarital affairs were numerous and barely hidden. “He was philandering from the moment he was married,” recalls old Kennedy-family associate Dick Tuck. “Not one-night stands, but not much more than that. Kind of affairs of convenience…I think most normal people might have more than one affair [during a marriage] but not every week, like Teddy. He was always chasing, looking for the conquest.”

GQ lauded Kennedy’s legislative accomplishments, opining, “And you can’t look at his labors without being impressed by his willingness to stick to the tedious daily tilling of the legislative field.” Kennedy bragged, “The ACLU thinks that it defines liberalism in the country. I define liberalism in this country.” GQ wrote, “He was exaggerating only a little. In the religion of liberalism, Kennedy is the guardian of orthodoxy.”

“To be truly human,” Ted Kennedy once said, “is to shape your own world.” And he has, far more than most men dream of, done just that. He has made laws. He has been at the front of sweeping change, improving the lives of many people. He has helped perpetuate a dynasty. The truth is, however, the world shapes us far more than we shape it. The truth is, the forces of the world—the rules of primogeniture, the warp of genetics and the woof of environment, the killing power of bullets and the grip of alcohol—shaped Ted Kennedy and shape him still. It is the sad irony of his life that while he has wrought his will on the world at large he remains unable still to control his own life. He started out in this world dangling from strings held by his father and his brothers. They’re gone now, but Teddy dangles still, dancing to the echoes of an old and tired tune.

And the women he mistreated, from the dead Mary Jo Kopechne to the waitresses to the unknown women he likely victimized? Apparently, they were just an ancillary and unimportant vestigial casualty of the man known as “The Lion of the Senate.”