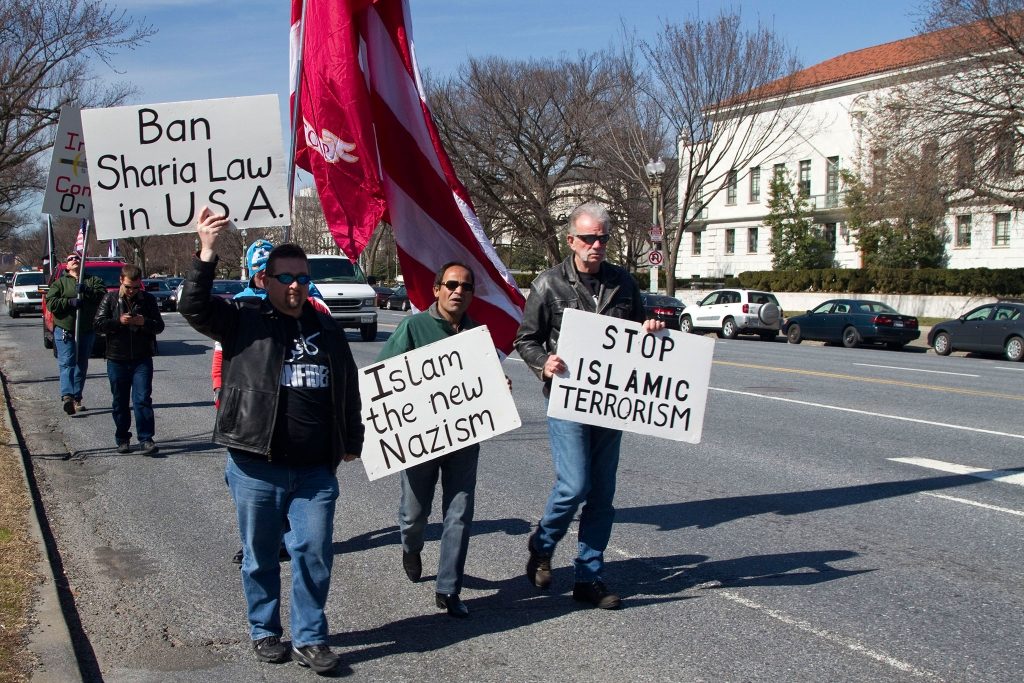 Why would anyone think Muslims would react violently?

President Trump displayed more courage and integrity Wednesday than Bill Clinton, George W. Bush, and Barack Obama ever did when he ended twenty-two years of waivers postponing the U.S. Embassy to Israel’s move to Jerusalem, declared that the U.S. recognized that Jerusalem was Israel’s capital, and announced that preparations for the embassy move would begin forthwith. And the world reacted with…Islamophobia.

“Today,” Trump said, “we finally acknowledge the obvious. That Jerusalem is Israel’s capital. This is nothing more or less than a recognition of reality. It is also the right thing to do. It’s something that has to be done.” He added: “This decision is not intended in any way to reflect a departure from our strong commitment to facilitate a lasting peace agreement. We want an agreement that is a great deal for the Israelis and a great deal for the Palestinians….The United States remains deeply committed to helping facilitate a peace agreement that is acceptable to both sides. I intend to do everything in my power to help forge such an agreement.”

Nonetheless, the reaction was predictable. Pope Francis obliquely denounced the move, saying: “I appeal strongly for all to respect the city’s status quo, in accordance with the relevant UN resolutions.” A spokesman for German Chancellor Angela Merkel said: “We do not support President Trump.” French President Emmanuel Macron said that Trump’s move was “regrettable.” British Prime Minister Theresa May called the move “unhelpful for peace prospects.”

Why were all these leaders, and many more, lining up against the move? Because Palestinian Authority President Mahmoud Abbas “warned of the dangerous consequences such a decision would have to the peace process and to the peace, security and stability of the region and of the world.” And Jordan’s King Abdullah said the move would “undermine efforts to resume the peace process.”

Egypt’s President Abdul Fattah al-Sisi urged Trump “not to complicate the situation in the region.” Saudi Arabia’s King Salman got to the heart of the matter when he said that the move “would constitute a flagrant provocation of Muslims, all over the world.” Turkey’s Deputy Prime Minister Bekir Bozdag warned on Twitter: “Declaring Jerusalem a capital is disregarding history and the truths in the region, it is a big injustice/cruelty, shortsightedness, foolishness/madness, it is plunging the region and the world into a fire with no end in sight.”

Those threats and others made the likes of Merkel, Macron, May and Pope Francis quail. They’re afraid that now that Trump has declared Jerusalem to be Israel’s capital, Muslims around the world will respond by rioting and killing innocent people. That is, after all, what Abbas means by “dangerous consequences,” and Bozdag by “a fire with no end in sight.”

But – the Islamophobia! Are Merkel, Macron, May and the Pope actually suggesting that we must tiptoe and walk on eggshells around Muslims, lest they react violently to the slightest “provocation” and innocent people get killed? All four of them would vie with one another to be the first in line to insist that Islam is a religion of peace and tolerance. So how can they be thinking that Muslims will react in any other way to Trump’s announcement than with calm, equanimity, and a renewed determination to return to the negotiating table?

If any other people had assumed that Muslims would riot and kill over this announcement or any other, May, Merkel, Macron and the Mad Pontiff would be the first to denounce them for “Islamophobia.” But since they are the guilty parties in this case, I will have to do the job: I hereby point the finger and utter the J’accuse to all four of them, and any other non-Muslim leader, who is warning today of the imminent danger caused by this “provocation”: you are revealing your “Islamophobia,” and contravening your own stated principles.

You are also admitting, inadvertently, that you know the truth: that the numerous incitements to violence and hatred in the Qur’an and Sunnah do tend to lead to Muslims behaving violently at the drop of a hat, or the move of an embassy. If this be “Islamophobia” to point out and oppose, then every sane person should be an “Islamophobe.”

(By Robert Spencer and reported by the Front Page)  http://www.frontpagemag.com/fpm/268652/global-islamophobia-follows-trumps-embassy-move-robert-spencer  (December 8, 2017)