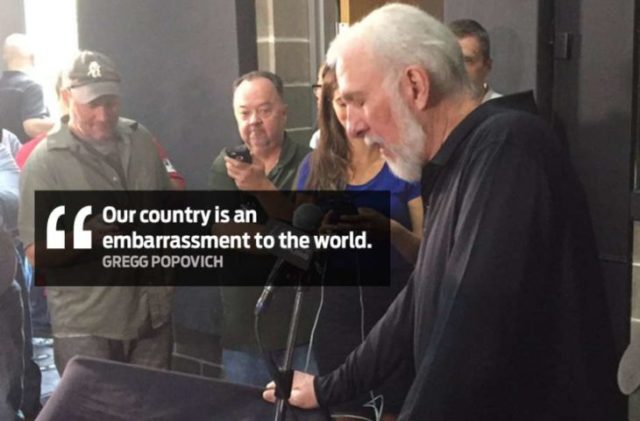 Popovich called the United States of America “an embarrassment” and followed that up by saying white people “especially” need to be made “uncomfortable” for any change to be made.

“There has to be an uncomfortable element in the discourse for anything to change,” Popovich explained. “Whether it’s the LGBT movement, women’s suffrage, race, it doesn’t matter. People have to be made to feel uncomfortable, and especially white people because we’re comfortable. We still have no clue of what being born white means.”

“If you read some of the recent literature, you’ll realize there really is no such thing as whiteness, but we kind of made that up. That’s not my original thought, but it’s true,” he continued.

Popovich added, “Because you were born white, you have advantages that are systemically, culturally, psychologically there. And they have been built up and cemented for hundreds of years, but many people can’t look at it. It’s too difficult.”