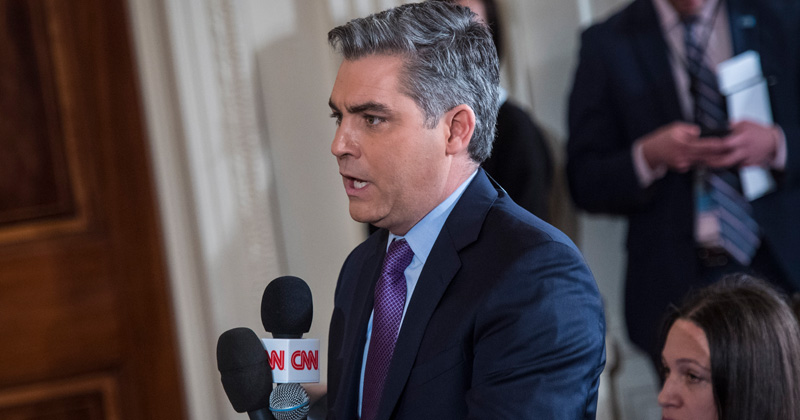 When the White House stopped allowing cameras in the press briefings, no one was more vociferous against the move than CNN’s Jim Acosta. He went on an unceasing tirade against the practice. This week he proved why he ranted against it — and why the White House may have been smart to institute the practice. It wasn’t really about transparency. It was about Jim Acosta being able to make the briefings about himself and not the president.

An exchange this week between Acosta and presidential adviser Stephen Miller proved why then-press secretary Sean Spicer was right to make the move.

That is exactly what Acosta was doing.

In 2015, CNN suspended a foreign affairs correspondent, Elise Labott. According to the Free Beacon, this was for her tweeting: “House passes bill that could limit Syrian refugees. Statues of Liberty bows head in anguish.” Which is pretty similar to what Acosta did this week.

Was the difference in response from CNN misogyny? They did, after all, treat a male and a female employee differently. No, according to the Free Beacon, it was because CNN believes it has a “very different kind of relationship” with the Trump administration. In other words, it’s OK for Acosta to be a political advocate against Trump, but criticizing the government during Barack Obama’s tenure was off limits.

Even MSNBC’s Joe Scarborough, an unrelenting opponent of the Trump administration, thought Acosta was out of line. Here’s how NewsBusters described it.

Jim Acosta’s increasingly infamous shootout on immigration with Stephen Miller on Wednesday drew criticism from many, even on the set of Morning Joe. John Podhoretz, editor of Commentary Magazine, offered a blistering statement of Acosta’s performance declaring, “I agree with him, but he’s destroying his own argument with his comportment.” Scarborough acknowledged as much and tepidly offered the suggestion that, “maybe we shouldn’t have TVs in the press room after all.” He further noted that Acosta’s criticism “went off the rails” in seeming to equate the Trump immigration policy to “something that you would read out of Mein Kampf or something.” (Emphasis added.)

Scarborough as much as said that Acosta was making the administration’s case for keeping out TV cameras with his grandstanding.

You can’t be an unbiased reporter and an advocate for one side of a debate over another at the same time. Acosta this week showed that he is in fact CNN’s on-air lobbyist for the Left. If the administration decides to once again remove cameras from the briefings, Acosta will have no one to blame but himself.