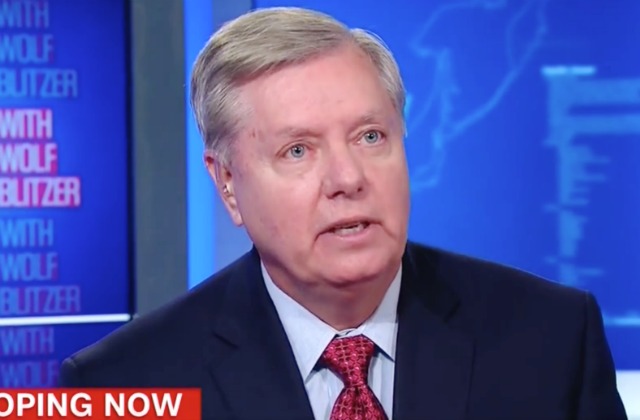 “I can only imagine how the country would react if Robert Mueller were fired just because the president [didn’t] like the investigation,” he continued. “Now if you show me a reason why he should be fired, then somebody else would be appointed in his stead.”

“So my legislation is pretty simple,” Graham explained. “If Robert Mueller is fired you’re gonna have a three-judge panel to review the firing to see if it meets the criteria of the Department of Justice regulations.

“I have no indication the president is going to fire Mueller,” he said, “his lawyer said today, here recently, that they wanna get this over with as quickly as possible. They’re gonna cooperate with the investigation.

“So Mr. [Ty] Cobb has got the right idea with how to deal with Mueller, I think,” he concluded.

Speculation has been rampant that Trump is seeking to fire Mueller since he publicly criticized his own attorney general, Jeff Sessions, for recusing himself on the Russian investigations, which the president says led to the appointment of Mueller.

.@LindseyGrahamSC on @POTUS firing Mueller: "If it was without cause… holy hell would break out." https://t.co/2uBmm0mtNP pic.twitter.com/CjxlcRn8wS

While even his allies, such as Ann Coulter, disagree with the president’s understanding of the causality and sequence that led to Mueller being named special counsel, others have argued he has enough conflicts of interest that he should be fired.

When asked Sunday if the president was considering firing Mueller, his counselor Kellyanne Conway denied it completely.

(First reported by The Blaze)http://www.theblaze.com/news/2017/08/07/lindsey-graham-issues-dire-warning-to-trump-about-firing-robert-mueller/   (August 7, 2017)