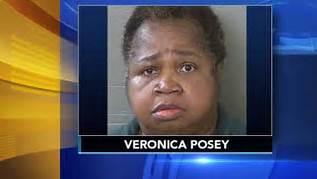 Authorities have determined that an obese Florida woman who killed her young cousin by parking her morbidly obese 325-pound ass on top the girl as punishment will face murder charges.

64-year-old Veronica Green Posey thought that it would be a good idea to trap 9-year-old Dericka Lindsay in an armchair and to then ignore the child’s pleas when she could no longer breathe.

This was a strange story that made news back in October as speculation swirled about how the law would treat Posey for her albeit inadvertent killing of the girl.

That answer has now arrived. The woman will face murder charges as per the decision of a Pensacola grand jury.

Murder indictment handed down for Pensacola woman accused of sitting on child https://t.co/niUwGckabl

Via The Pensacola News Journal “Murder indictment handed down for Pensacola woman accused of sitting on child”:

A Pensacola woman has been indicted for murder in the death of a child she allegedly sat on as a form of discipline.

On Oct. 14, Dericka was allegedly “acting out” toward her adoptive parents, Grace and James Smith, according to a search warrant affidavit filed by investigators. Witnesses referenced in the affidavit reportedly said Dericka had a hammer and a knife.

Posey, Dericka’s cousin, allegedly tried to get the child under control by sitting on her. Posey reportedly weighs around 325 pounds, and Dericka allegedly told Posey she couldn’t breathe with Posey on top of her.

Posey didn’t believe the claim, and told Dericka to “quit faking,” the affidavit claims. Shortly afterward, the family contacted 911 because Dericka wasn’t breathing, and the 9-year-old was transported to Baptist Hospital, where she was pronounced deceased.

Felony murder charges are filed when a person is killed by a defendant who is committing or attempting to commit a felony. In Posey’s case, she is also accused of aggravated child abuse.

If convicted of first-degree felony murder, Posey would face an automatic life sentence.

Ironically, spending a good amount of time in prison could actually be a blessing in disguise for Posey who could benefit from a restrictive diet and exercise.

If convicted, expect her attorneys to invoke the “too fat for prison” excuse that was just used in another case a few hundred miles south down in Tampa on a tax cheater who tipped the scales at a svelte 278 lbs.