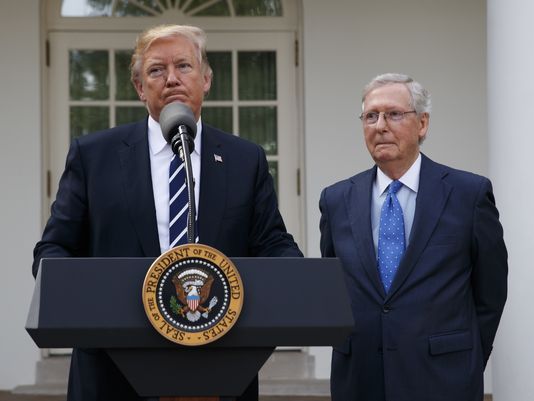 WASHINGTON (AP) — Republicans on Thursday muscled a $4 trillion budget through the Senate in a major step forward for President Donald Trump’s ambitious promise of “massive tax cuts and reform.”

The 51-49 vote sets the stage for debate later this year to dramatically overhaul the U.S. tax code for the first time in three decades, cutting rates for individuals and corporations while eliminating trillions of dollars of deductions and special interest tax breaks.

The tax cuts would add up to $1.5 trillion to the deficit over the coming decade, however, as Republicans have shelved fears about the growing budget deficit in favor of a once-in-a-generation opportunity to rewrite tax laws.

“These are reforms that change incentives and drive growth, and we’ve never done that before,” said Sen. Pat Toomey, R-Pa.

Divisions within the GOP indicate the process won’t be easy despite the political imperative.

The upcoming tax measure, always a top item on the GOP agenda, has taken on even greater urgency with the failure of the party to carry out its longstanding promise to dismantle former President Barack Obama’s signature health care law. Republicans have said failure on taxes would be politically devastating in next year’s midterm elections, when control of the House and Senate are at stake.

When reconciled with the House budget plan, the nonbinding measure would set up special procedures to pass follow-up tax legislation without the threat of a filibuster by Senate Democrats. Pressure is mounting, however, on the House to simply adopt the Senate budget plan rather than risk lengthy negotiations that could delay the tax measure.

The House measure calls for a tax plan that wouldn’t add to the deficit, as well as $200 billion worth of cuts to benefit programs that the Senate has rejected.

Democrats blasted the GOP budget, warning voters that the upcoming tax measure will shower benefits on top-bracket earners, corporations, business partnerships and people inheriting multimillion-dollar estates. Trump promises that the tax plan — still under development — is aimed at the middle class, but previous versions have seen upper-income individuals benefiting the most.

“Unfortunately, there’s a big gap between the administration’s rhetoric on these issues and the reality of what is on paper,” said Oregon Sen. Ron Wyden, the top Democrat on the tax-writing Finance Committee, who warned that Trump’s plan is “slanted overwhelmingly toward the very top.”

“The more people learn about this tax bill, the less they will like it,” said Senate Minority Leader Chuck Schumer, D-N.Y. “That’s what led to the demise of health care, ultimately, is that it was unpopular with the American people.”

Only one Republican, Rand Paul of Kentucky, voted against the budget. He said the measure permits too much spending and abandons the GOP drive to repeal the Obama health law. An amendment by Paul to revive the “Obamacare” repeal failed by a 2-to-1 margin.

Under Capitol Hill’s byzantine budget rules, the nonbinding budget resolution is supposed to lay out a long-term fiscal framework for the government. This year’s measure calls for $473 billion in cuts from Medicare over 10 years and more than $1 trillion from Medicaid. All told, Senate Republicans would cut spending by more than $5 trillion over a decade, though they don’t attempt to spell out where the cuts would come from.

Even so, the measure doesn’t promise to balance the budget, projecting deficits that would never drop below $400 billion.

Republicans have no plans to carry out the measure’s politically toxic proposals to cut Medicare, food and farm programs, housing subsidies and transportation. Instead, work is under way to add tens of billions of dollars for both the Pentagon and domestic agency operations. And the Senate is poised to send Trump a $36.5 billion hurricane relief bill Monday.

The budget measure also would revive long-moribund efforts to permit exploration for oil in Alaska’s Arctic National Wildlife Refuge, permitting legislation opening up ANWR to drilling to catch a ride on the popular tax measure. Otherwise, it would be vulnerable to a filibuster by Democrats.