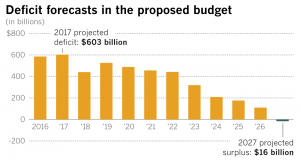 Trump has proposed his fiscal 2018 budget and it is full of spending cuts that add up to $3.6 trillion. The cuts would mean drastic decline in funding for food stamps, Medicaid, disability benefits, low-income housing, and other social programs. The proposed cuts are very drastic and are finding little support from even Republicans.

The cuts would take away much of the funding that was put into place by Obamacare and cause for an increase in interest rate for student loans of recent college graduates. The budget proposal would also cut the funding for agriculture subsidies, which will have an impact on all of the United States. These are cuts that the left has feared but looks that these cuts could hurt Trump supporters the most.

On the other hand, Department of homeland security and pentagon budget would increase by $9 billion dollars. This does not include the huge increase in military spending that will be included in the budget proposal. The other major budget increase that has been released is that paid parental leave would gain $25 billion dollar, which would be over the next 10 years. 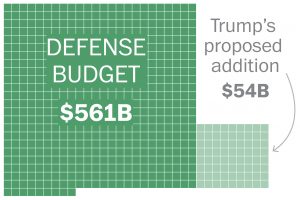 Paid parental leave is interesting because of push that Trump’s daughter has had for an increase in this program. Now, these are only a few of the changes in programs that have been proposed and we will defiantly see more to come as his budget.

The proposed budget cuts seem to hurt a lot of Trump’s supporters but there is reasoning behind the cuts. The cuts are intended to get peoples working and not relying on the government programs. The “feel good” measurement will come the amount of people in the workforce and off the programs and not the number of programs or number of people in the programs. The budget is intended to make the most of tax payer dollars but we shall see if the budget really does so.

Want more BFT?  Leave us a voicemail on our page or follow us on Twitter @BFT_Podcast and Facebook @BluntForceTruthPodcast. We want to hear from you! There’s no better place to get the #BluntForceTruth.