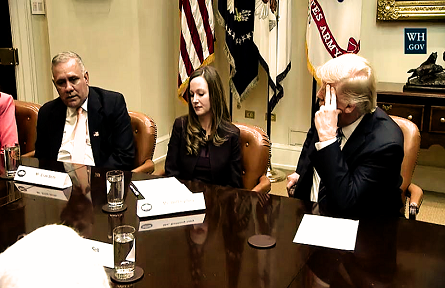 Families who experienced horror stories under Obamacare gathered at the White House Monday and warned Republicans of political consequences if they did not vote to repeal and replace the law.

“I am very fine with sitting at home in 2018 and not voting if that is the only way to get their attention, I’m more than happy to not vote for them. I’m tired of this,” said Marjorie Weer of South Carolina.

“I am tired of their pathetic excuses of why they are incapable of doing their job,” Weer added. “You’ve had seven years to come up with a plan. You have the House, the Senate, the White House … If you can’t do the job, go home.

Weer said she spent six months negotiating with an insurance company just to clear the way for her 3-year-old son Montgomery with spina bifida to travel from South Carolina to see doctors at Boston Children’s Hospital.

“You’ve had seven years. If you can’t do your job, go home,” Weer told The Daily Signal during a press gaggle after she and other families met with President Donald Trump and Vice President Mike Pence at the White House. “Act like your jobs are on the line.”

Weer’s story was first reported by The Daily Signal in February.

After meeting with families in the Blue Room of the White House, Trump delivered a public speech, noting the problems those families face.

“Every pledge that Washington Democrats pledged to pass that bill turned out to be a lie. It was a big fat ugly lie,” Trump said. He added that Republicans have been promising to repeal and replace for seven years. “There’s still time to do the right thing.”

The House passed a repeal and replace bill, after a long slog to win over conservatives. However, Senate GOP leadership has had a difficult time corralling both the moderates and conservatives on a replacement bill.

Trump also met with the family of Melissa Ackison of Ohio, who has a rare bone disease, and Stephen Finn of West Virginia, who is running a Christian boys ranch and saw premiums skyrocket for insuring his employees.

Ackison, when speaking to reporters, also said she would take her vote elsewhere if Republicans can’t repeal and replace the Affordable Care Act.

“My family was first introduced to Obamacare through the co-op that shortly went bankrupt, leaving us to hold the bag with a lot of those bills, then throwing us back into the marketplace again where we were sold another faulty insurance plan with an extremely high deductible that didn’t cover the vast majority of our pre-existing conditions,” Ackison said. “Despite what you’re hearing about the [Affordable Care Act], the pre-existing conditions are not guaranteed to be covered.”